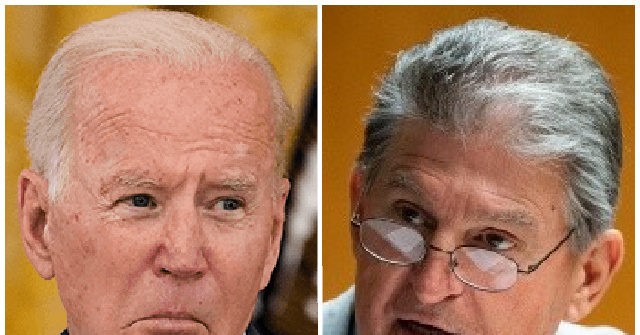 President Biden’s $1.9 trillion reconciliation package will reportedly be shelved until 2022 due to Sen. Joe Manchin’s opposition to inflation-exacerbating measures within the deal.

As Democrat leadership has desperately tried to win Manchin’s vote to pass the largest welfare package since Lyndon Johnson’s Great Society initiative in the 1960s, a Fox News anchor on Wednesday indicated negotiations between the president and the senator exploded in failure and will not be restarted until 2022.

Wednesday’s negations were reportedly based on the length of time Manchin was willing to subsidize Americans with a child tax credit.

“This is bullshit. You’re bullshit,” Manchin told a Huffington Post reporter when asked if the extra $1,600 expiring payments should be renewed in the reconciliation package. “I’ve always been for child tax credits,” he said, noting he would not negotiate with a reporter.

“This is bullshit. You’re bullshit,” Joe Manchin just told me

Manchin and Republicans have voiced worries that spending trillions of dollars in welfare during 40-year-high inflation would hurt the economy. The the Congressional Budget Office (CBO) estimated Friday the price of the package would be double Biden’s estimate.

Anyone with a shred of sense knows this is the absolute wrong time to unleash a multi-trillion-dollar taxing and spending spree. Every single day brings new evidence our Democratic colleagues should give the country a break.

To the president’s dismay, Manchin is also reportedly not revealing for which particulars he would or would not vote, frustrating Democrat leadership and stalling the deal.

“We believe the senator wants what we want, which is to deliver for the American people,” White House principal deputy press secretary Karine Jean-Pierre told reporters Wednesday.
But Manchin told a Fox News reporter the Senate leadership still does not have the full text of the legislation for review, and the Senate parliamentarian has not ruled whether certain radical provisions can be included in the bill.

One of those provisions includes amnesty for millions of illegal aliens.

While Sen. Chuck Schumer (D-NY) has planned to pass the package before Christmas, it appears Manchin remains the single Democrat vote blocking Biden’s massive tax and spend package from passing the Democrat-controlled Congress.

Another reason why BBB not gonna happen by Christmas: The process w the parliamentarian is taking a long time. Senate Finance still hasn’t begun the bipartisan “Byrd bath” process, per Wyden, who told us earlier this week there were more than 20 issues outstanding on his piece

“It looks like we have President Manchin instead of President Biden,” Sen. Bernie Sanders (I-VT) adviser Faiz Shakir told the New York Times.

Meanwhile, at the bequest of Sen. Lindsey Graham (R-SC), the CBO on Friday released scoring on the reconciliation package that indicated the cost of the measure would be $4.9 trillion, far less than Biden’s estimate of $1.9 trillion.

The difference in the numbers is the continuation of welfare provisions over ten years, such as child tax credits, child care provisions, the SALT deduction, and health insurance subsidies. Where Biden’s score was predicated on the welfare subsidies expiring in a few years, Graham believes welfare provisions are difficult to revoke once they are instituted.