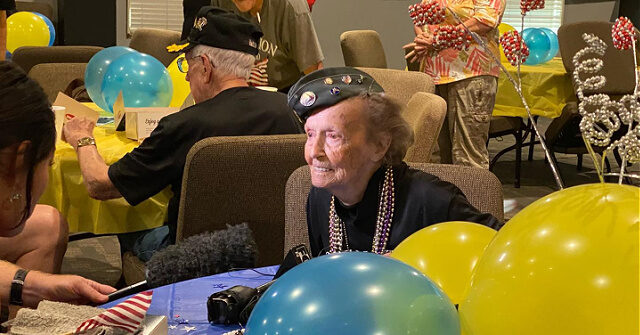 A 100-year-old veteran was recently honored by the Cherokee Nation for her service in the Women’s Army Auxiliary Corps in World War II.

Winifred “Freddie” Dudley of Owasso, Oklahoma, was awarded the Medal of Patriotism by Cherokee Nation officials along with two other veterans during the August meeting of the Council of the Cherokee Nation earlier this month, the Claremore Daily Progress reported.

While serving in the Women’s Auxiliary Army Corps, Dudley — whose surname was Whelchel at the time — was a part of the Air Transport and Command that primarily transported troops and blood plasma to various bases across the U.S., according to 2 News.

The Cherokee citizen worked many different jobs during her service in the Army, including as a clerical worker, military postal worker, and chaplain’s assistant. She was stationed across multiple Army bases across the nation, including in five different states.

After being discharged in 1945, Winifred met her husband, Jess Dudley, who was also a WWII veteran and served in Normandy and the Battle of Bulge. Together they had five children, according to Cherokee Phoenix. They were married for 70 years before his passing.

In 2010, Dudley took her first Honor Flight to Washington, DC. After returning from the trip, she helped start an Honor Flight program in Tulsa, allowing many veterans to visit the nation’s capital free of charge, 2 News reported.

At the council meeting, she was referred to as a “Cherokee Warrior,” and while accepting her award, she honored her heritage and expressed gratitude toward God.

“My great-grandmother came over on the Trail of Tears,” Dudley said while accepting her award. “I’m just thankful to be part of the Cherokee Nation. We serve a great God. He will never leave us nor forsake us. He’s going to take care of me. I don’t care if I am 100 years old.”

During the ceremony, it was also announced that Dudley would be receiving another honor known as the Patriotism Award later in the year.

Last month, Dudley turned 100 years old, which was celebrated by family and friends at a surprise birthday party.