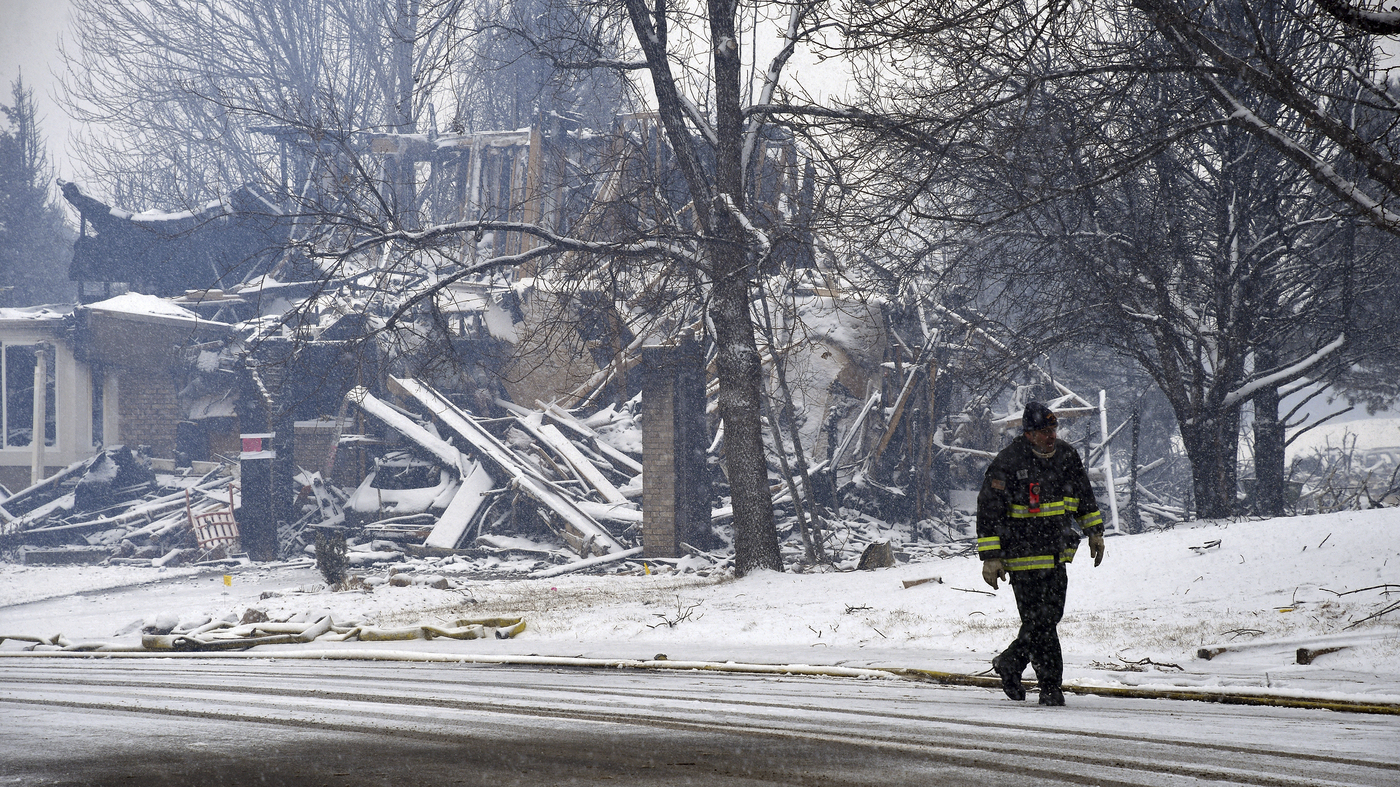 Jennifer Churchill, a spokeswoman for the Boulder Office of Emergency Management, confirmed the news to the Colorado Sun but declined to release the identities of the two missing people.

Thursday’s Marshall fire tore through the towns of Superior and Louisville, two municipalities in the stretch of suburbs that reach from Denver to Boulder, forcing the evacuation of more than 30,000 people and leaving piles of ash and rubble where hundreds of homes once stood.

Boulder County officials had announced Friday that nobody had died and that all missing persons had been accounted for. Gov. Jared Polis called it a “New Year’s miracle.”

But later Friday, local TV station 9News reported that a 91-year-old woman named Nadine Turnbull was still missing. Family members told the station that they tried unsuccessfully to evacuate Turnbull from her home in Old Town Superior during the fire.

“They tried to go out the front door with the neighbor. It was engulfed,” said Hutch Armstrong, Turnbull’s grandson-in-law, speaking to 9News. Afterward, the family reported her missing.

“I think the sheriff probably wasn’t adequately briefed by us,” Churchill told The Colorado Sun. “That was an unfortunate error. We feel terrible.”

“We’ll continue to look for those folks and report out as soon as we have information,” Churchill added. The Boulder County Sheriff and Office of Emergency Management did not immediately respond to NPR’s request for comment.

The fires, which sprung up dramatically and suddenly on Thursday, were extinguished by snowfall that began Friday afternoon and lasted overnight into Saturday. More than 8 inches fell in nearby Boulder, the National Weather Service reported.

The winter weather — with high temperatures expected to reach only the mid-teens on Saturday — presented its own problems for residents lucky enough to be able to return home. Lingering power and gas outages were expected to affect thousands into the weekend.

“The snow has come and that has been wonderful, because it’s helped to put out the fire. But it creates some other challenges with pipes freezing and things like that,” said Louisville Mayor Ashley Stolzmann in an interview Friday afternoon with local radio station KOA.

It’s a new year, friends. We are still in the first chapter of a long and painful story, but together we are stronger and will persevere. We know many of you are looking for updates about returning to Louisville and we will share that information as soon as it’s available. pic.twitter.com/96UFwCiKdu

Though Colorado is no stranger to destructive wildfires, fires typically strike more remote areas in the state.

Thursday’s fire was an urban grass fire, with dry conditions exacerbated by powerful wind gusts that made it difficult for firefighters to combat the flames by plane.

Kennedy Reynolds, standing with her daughter Belle, 2, and son Forrest, 6, takes a photo of a burned-out condo in Louisville, Colo., on Friday.

Kennedy Reynolds, standing with her daughter Belle, 2, and son Forrest, 6, takes a photo of a burned-out condo in Louisville, Colo., on Friday.

Authorities initially suggested that the fire may have been sparked by power lines downed by the wind. But utility company Xcel Energy reported Friday that none of its power lines in the area where the fire began had been downed, throwing that explanation into question.

“Typically, communications lines (telephone, cable, internet, etc.) would not be the cause of a fire. The full investigation is still ongoing and we will share more updates as they become available,” said an update from the county.

Climate change has lengthened the state’s fire season, said Jennifer Balch, a fire researcher and director of the Earth Lab at the University of Colorado, Boulder. And 2021 was an unusually dry year.

“Climate change is essentially keeping our fuels drier longer. These grasses that were burning — they’ve been baked all fall and all winter. On top of that, we didn’t get a lick of moisture,” Balch said.

In Denver, snow typically falls for the first time in October. But this year, the city recorded no snow until 0.3 inches fell in mid-December — smashing the previous record of Nov. 21, which was set in 1934.