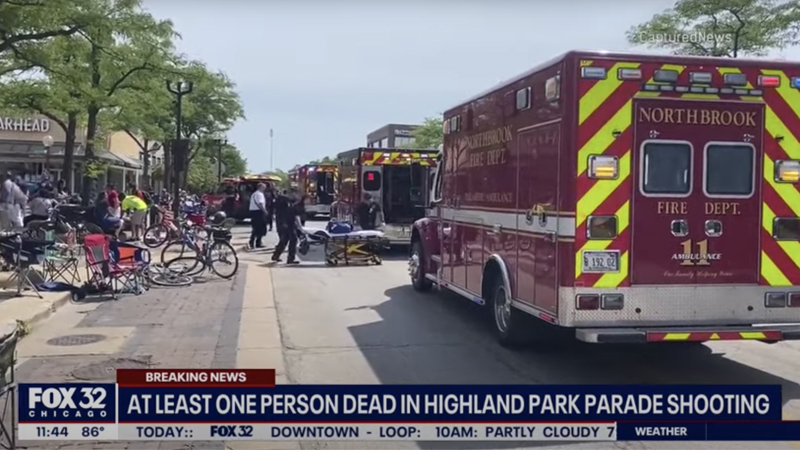 Update (7:18pm CST): The Highland Police have apprehended the “person of interest” tied to the Fourth of July parade shooting, 22-year-old Robert Crimo III aka “Awake the Rapper” several hours after the massacre took place.

Crimo was taken into custody shortly after a North Chicago police officer spotted his vehicle matching a police description.

Six people were killed and at least 24 injured after a gunman began shooting during a Fourth of July parade outside Chicago, Illinois on Monday.

Video captured the moment when numerous shots rang out 10 minutes after the Highland Park Fourth of July parade kicked off, prompting panicked attendees to abandon their belongings and flee the scene.

One witness told the Chicago-Sun Times that he heard over 20 shots and saw the carnage left by the shooting.

“I heard 20 to 25 shots, which were in rapid succession. So it couldn’t have been just a handgun or a shotgun,” said Miles Zaremski, adding that he saw “people in that area that got shot,” including “a woman covered with blood. She did not survive.”

Another witness, former Sun-Times reporter Adrienne Drell, said she fled to a nearby parking lot when the shots began.

“It was a quiet, peaceful, lovely morning, people were enjoying the parade,” Drell said. “Within seconds, to have that peacefulness suddenly ripped apart, it’s scary. You can’t go anywhere, you can’t find peace. I think we are falling apart.”

One witness, “My Best Friend’s Closet” owner Gilat Zamos, told Fox 32 Chicago that families were “basically running for their lives,” and suggested more action be taken against “gun violence.”

“State police are on the scene and we have made all state resources available to the community. We will continue working with local officials to help those affected,” he tweeted.

My staff and I are closely monitoring the situation in Highland Park. State police are on the scene and we have made all state resources available to the community. We will continue working with local officials to help those affected.

Highland Park Police are still searching for the suspect and told residents in a statement: “Everybody disperse, please. It is not safe to be here.”

Witnesses say the shooter was on the roof of Uncle Dan’s and fired into parade. 5 or 6 shots, then a pause, then 5 or 6 more shots. The shooter is still at large and North Shore residents are being asked to stay inside. #highlandpark @WGNNews

The Associated Press reported that 24 people have been taken to local hospitals and 6 people have died as of this writing.

The Fourth Fest has been cancelled.

Notably, despite the fact Chicago area has some of the most stringent gun control laws in the country, it also has one of the highest violent crime rates in the country.