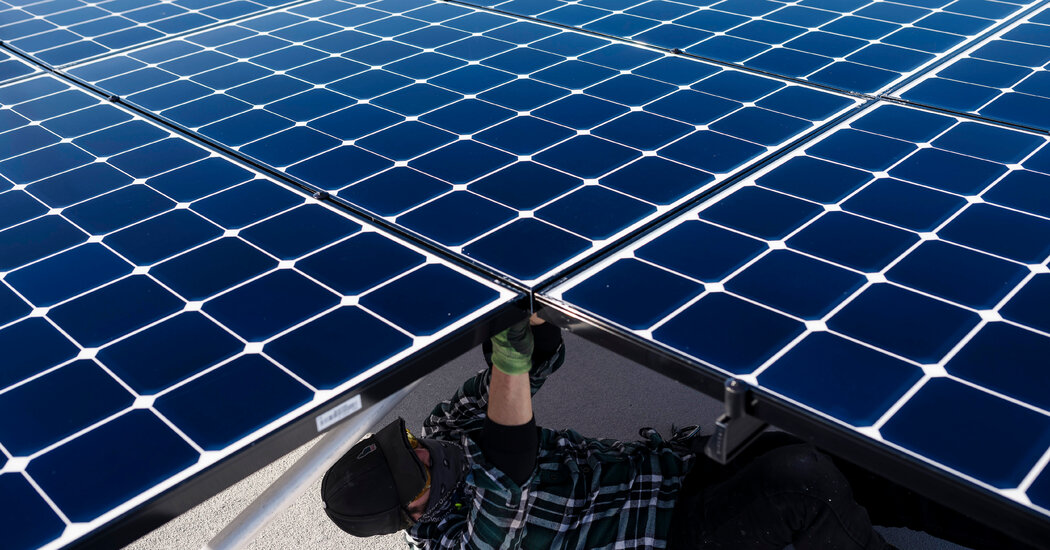 President Biden promised to take serious action on climate change, and he set an ambitious goal to do it: halve the United States’ greenhouse gas pollution from its peak by 2030.

Meeting that target could help stave off the starkest predictions of a climate disaster — extreme weather, toxic air, uninhabitable regions and conflicts over resources like food and water. It could lead to a rosier future, with clean energy that powers vehicles, homes and businesses as well as new industries and more jobs.

Which path the U.S. goes down will fall largely to Congress.

The Senate is deadlocked on the Build Back Better bill, the core of Biden’s legislative agenda that includes sweeping provisions on global warming. Without those parts of the bill, experts say, Biden’s climate goal is likely impossible. But lawmakers still have time to strike a deal.

At the center of its climate provisions, as passed by the House, are tax credits that make it cheaper to build solar, wind, nuclear and other low-carbon energy sources. The federal government would provide subsidies for consumers buying electric vehicles. Electric heat pumps — energy-efficient alternatives to traditional air conditioning and heating — would also be cheaper.

And the bill would improve the infrastructure that enables those clean energy initiatives, funding more charging stations for electric vehicles and improving electric grids to support more solar and wind power.

The bill would also finance more research and development, including efforts to capture carbon pollution from the air. It would support programs for climate-friendly farming and measures for better forest management. It would encourage a range of polluting industries, like cement and steel, to decarbonize.

On its current trajectory, the U.S. would exceed Biden’s goal by 1.3 billion tons in carbon emissions, “a yawning gap that is unlikely to be bridged by executive action or state policy alone,” wrote Jesse Jenkins, an energy systems engineer at Princeton University. But with Build Back Better, the U.S. would end up “within easy reach” of the goal, cutting greenhouse gases by almost half.

The effects of some of these policies are uncertain, though potentially in a positive way: If the spending leads to a big breakthrough in clean energy or the adoption of it, the money could have a bigger impact than expected.

“Sometimes these little provisions that people don’t think a lot about at the time of passage end up being hugely transformative policies,” Leah Stokes, a climate policy expert at the University of California, Santa Barbara, told me.

The window for action may be closing. Democrats face steep odds of maintaining control of both the House and Senate in November’s midterm elections. Republicans have shown little to no willingness to act on climate change, and many on the right still deny it’s a serious issue at all.

Today, Build Back Better is stalled in the Senate primarily over its social spending programs, not the climate proposals. Senator Joe Manchin, a key swing vote at the center of Democrats’ negotiations, has indicated that he’s open to passing at least some parts of the bill, including its climate provisions, even if it means scaling back or breaking up the overall legislation. Other Democrats appear to be onboard with that idea.

Democrats have been trying to take broader action to fight global warming for decades, describing it as an existential crisis. But they’ve failed to pass legislation that meets the full scale of the problem. Build Back Better is the closest they’ve gotten.

See the climate change pledges from the U.S. and other nations.

And thank you for reading! Before joining The Times, I covered politics and policy, criminal justice and public health at Vox. (It was a busy few years.) On Sundays, I plan to explore big events and ideas — and how they affect people. If you have suggestions, email themorning@nytimes.com.

Contradiction on the right: Republican hawks committed to an expansionist, Cold War-era foreign policy are a stumbling block to any realignment of the party, Sohrab Ahmari, Patrick Deneen and Gladden Pappin argue.

History backlash: The intensity of some conservatives’ push against histories of race and racism is a sign that they are on the defensive, Jamelle Bouie writes.

Therapy-speak: Whether it’s “love bombing” or “gaslighting,” the language of pseudo-psychology seems to be everywhere, Jessica Bennett writes.

Education requirements: A Pell Grant helped Tara Westover work her way through college. For many poor kids today, that path is narrowing, she warns.

The Sunday question: Is it time to end affirmative action?

Doing so would hurt efforts to reduce racial and economic inequality in the U.S., Keisha N. Blain argues for MSNBC. John McWhorter says that colleges can better fight inequality by replacing race-based admissions policies with ones that benefit poorer students of any race.