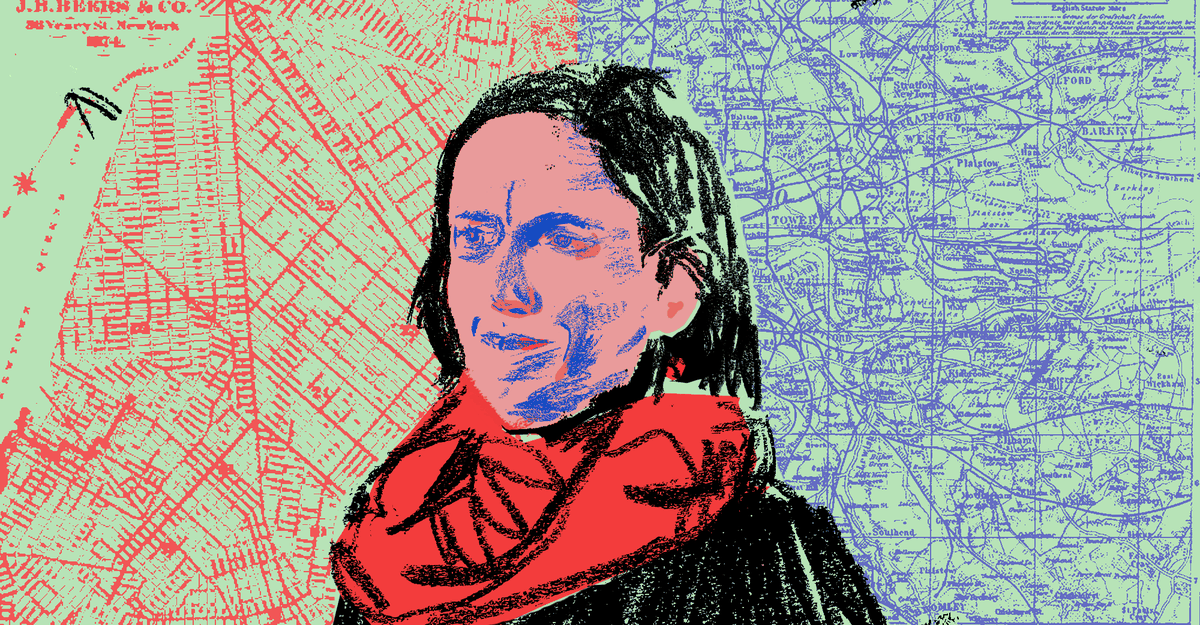 After Donald Trump came to power, Rebecca Mead couldn’t shake her agitation. For months, the longtime New Yorker writer felt that her existence had “shrunk down to a meager tunnel of survival.” When she realized that “the darkness was only at its beginning,” she began pondering her escape. Unlike so many other fantasizers at the time, as a British citizen she could turn an alternative reality into actuality. (Having a portable career helped, too.) So in the summer of 2018, Mead and her American husband, also a writer, seized the opportunity to give their dual-heritage son an experience of England as more than a tourist.

Ever the writer, Mead also jumped at the chance to get a book out of her move. In Home/Land: A Memoir of Departure and Return, she deftly layers historical research with autobiography to unsettle familiar ideas of homecoming—and of memoir-writing.

Mead’s restlessness will come as no surprise to those who have read her experimental memoir My Life in Middlemarch, an account of her decades-long love of George Eliot’s masterpiece. When she first encountered the novel as a 17-year-old living in the sleepy seaside town of Weymouth, England, she identified intensely with Dorothea Brooke, the provincial protagonist “yearning for a more significant existence.” In her own quest for a meaningful life, Mead moved to Manhattan at 21, intending to get a journalism degree and return to England. Instead, she fell for the city and stayed after graduation, progressing through a series of jobs (editorial assistant, fact-checker, New Yorker reporter). Every five or so years, she reread Middlemarch, aware that “the questions with which George Eliot showed her characters wrestling would all be mine eventually,” and keen to discover new wisdom with older eyes. One question in particular echoes in her newest book: “What are the satisfactions of personal ambition, and how might they be weighed against ties and duties to others?”

Read: Why marriage is the start of an ‘epic,’ according to George Eliot

Reading Middlemarch was Mead’s way of peering into a crystal ball, and Home/Land served a similar function for me. I left Australia in 2012 as a fidgety 19-year-old, convinced there were bigger and better options abroad (though my model was more Rory Gilmore than Dorothea Brooke). After college in the States, I was offered a job at The Atlantic and I ended up staying … and staying. I missed my family and my neighborhood, but my new life in America’s capital was fun and far less predictable than any future I could picture in Sydney. Mead’s ode to enchanted outsiderdom resonated: Her status as a foreigner (specifically a white, educated, English-speaking one with a welcome accent) was an accidental asset, both professionally and personally. “This must be what it’s like to be beautiful,” she writes, putting into words the surprise I felt as a new transplant when Americans remembered me after brief, mundane encounters. My romanticism about D.C. dimmed during the Trump years, but I continued to associate the prospect of heading back to Australia with failure—failure of ambition, failure of imagination. A question nagged: Would going home always feel like just a fallback plan?

I’d found the right book. Mead’s memoir messes with the conventional notion of homecoming as a matter of choosing ease, comfort, and rootedness over adventure, growth, and drive. What she struggles to explain to friends and strangers is that she’s motivated less by the prospect of returning to her native city than by the idea of dislocating her 13-year-old son. Her own youthful desire to explore was nurtured by “never quite feeling at home in my home,” and she feels duty-bound to upset and expand her kid’s understanding of the world. “A sense of displacement is so constitutional to my own being that I seem to have been compelled to make it my son’s inheritance,” she writes. Even New York City, she discovers, “can make a young person believe there is no other place in the world significant enough to matter. I want to inoculate my son against such provincialism.”

Mead herself is ready for a booster. Upon returning to London, she is once again an outsider.  Creating a life in Britain after 30 years away is hard. A dip in the frigid ponds of Hampstead Heath makes her nostalgic for afternoons at Brighton Beach in Brooklyn, reading books and eating at a Russian restaurant on the boardwalk. But she’s eager to expose herself. She turns pond swims into a “daily discipline,” continuing even as temperatures drop and her “clavicles and ribs felt ready to shatter” upon submersion. For her, the austere yet exhilarating acclimation that this new ritual entails is symbolic of a broader “coming to terms with … this chilly, reserved country.”

Read: Swimming in the wild will change you

Now “a deracinated New Yorker,” Mead finds herself for the first time “captured by a fantasy of ancestry.” Wandering around London, she envisions her “dead forebears … walking these streets like characters in search of a novel.” Her own hunt for a more solid sense of rootedness isn’t easy. Her husband comes from a wealthy, connected Boston family with a “storehouse of history” dating back to the early 19th century. Mead has more modest ancestors (barman, carpenter, illustrator) and only a slim archive: a pencil sketch, military files, a few letters, a family tree, and a handful of birth, death, and marriage records.

Looking for a more vivid sense of place, she turns to works of culture. The result is a collage of London—with a focus on working life in the 20th century—where class is “less like a system and more like a miasma.” The pre–World War I paintings of Walter Sickert, for example, become “stand-in images of the domestic life of my grandmother and her parents and siblings—too many people squeezed into too few rooms, pinched for cash to make ends meet.”

In a wild stroke of luck, the man Mead hires to build the bookcases in her new home is himself the stuff of novels. A 70-odd-year-old ex-con carpenter, John illustrates the big risks and rewards of swerves in life—far bigger than Mead’s writerly existence can encompass. Until his release in 2018, John had been Britain’s longest-serving prisoner, convicted of murder for shooting a bouncer after a pub brawl in the 1970s (he claims the man had gouged his friend’s eye out with a broken bottle). He and Mead gradually become friends. They share the experience of emerging from exile—a “voluntary, privileged exile” in her case—to a changed London, a city they haven’t truly known since their 20s. Even John’s Cockney accent marks him as part of a bygone generation. Many young Londoners, Mead learns from her son, speak a dialect that pools key features of the languages of its many immigrant groups, and signals their “status as the future of London.” For both Mead and John (who is cobbling together his own memoir), finding a place amid flux means exploring ties to the past.

John serves as a warning of how radically one poor decision can alter a life, but he is also proof that stasis can be the grimmest outcome of all. While incarcerated, his glimpses of freedom were hard-won: He tells fit-for-TV tales of his escapes, climbing out a bathroom window or scaling a wall with a “rope made from netting he’d pilfered from the prison gym” just to visit ailing family members (he was 64 when he managed that last slip; “oldest prisoner ever to climb that wall,” he bragged to The Guardian). Once, with the help of a private plane, he made it to Spain. These interludes kept him from going mad, he tells Mead. But he paid for them, serving more than twice his original sentence.

“We chose movement, because movement is a kind of freedom,” Mead writes of her family’s decision to leave their comfortable Brooklyn community. Yet movement also has its share of perils. The clay in London is soft, she learns, so the city’s buildings are always shifting and settling into lopsided formations. Historic movement is how real-estate brokers and surveyors describe the phenomenon—a phrase, Mead writes, that “seemed to sum up the moment in both the country I left and the one to which I returned, where the ground was moving underfoot in unprecedented ways.” At a time when little feels truly sturdy, Mead’s book is a reminder that having a place to return to, and a history to explore, is a luxury. More than that, Home/Land offered me hope that moving back to Sydney might someday feel as daring and refreshing as moving away.