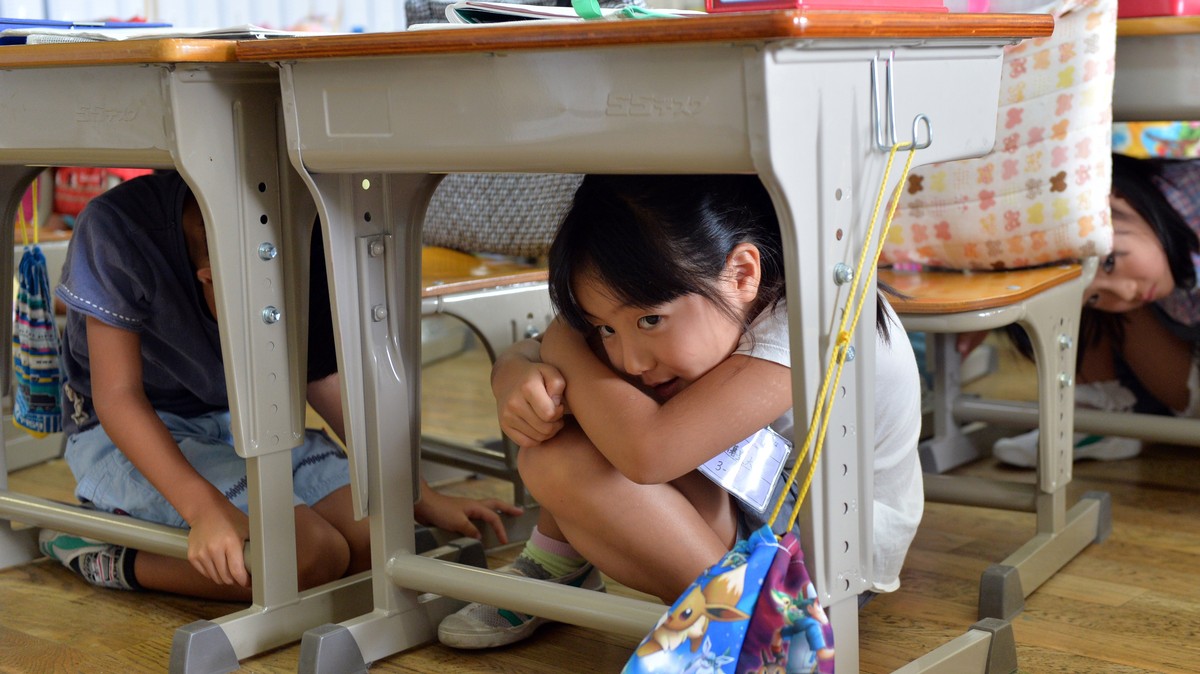 First, a tiny tremor. It’s small enough for you to keep standing, but large enough to rattle nearby shelves, forcing your eyes to dart around for imminent danger. Your heart skips a beat. Each passing second feels like a minute. You wait.

Then comes the rumble. Forcefully, it shoots up from the depths of the ground you stand on, trickling panic among those nearby. Objects sway helplessly. Everyone ducks under desks, waiting for stillness.

Such was the recent experience of Hiroshi Shibahara, a vice principal on Akusekijima island in southern Japan. On Thursday, the island felt a strong 6.1 magnitude earthquake, its strongest tremor in over two decades.

“We’ve had frequent earthquakes these past few days, but none of them were that big,” he told VICE World News. “After that big one, you start thinking the really big one could come any day now—that’s what makes me most fearful.”

Since Dec. 4, several small islands like Akusekijima, in Kagoshima prefecture, have been experiencing an uncomfortable number of earthquakes. Over the course of five days, these islands recorded 231 tremors. Although experts say the frequency was not extraordinary, nearly half of the tiny island’s 75 residents have been evacuated, citing fear and difficulty sleeping.

As one of the most earthquake-prone countries in the world, Japan is no stranger to such tremors. Earlier this year, the same Kagoshima island chain experienced over 200 earthquakes in just three days. On Dec. 3, eastern Yamanashi prefecture felt a 4.9 tremor. Less than three hours later, a 5.4 quake shook southern Wakayama prefecture.

Government seismologists predicted in 2018 that there’s a 70 percent chance an eight- to nine-magnitude quake would rock Japan within the next 30 years, with intensities comparable to that of the 2004 Indian Ocean earthquake and tsunami, which killed nearly a quarter of a million people. The quake is projected to come from the Nankai Trough, an ocean-floor trench that extends from central Japan to the southern island of Kyushu.

But the series of recent tremors occurring all over Japan is precisely what’s scaring some, moving them to prepare for the worst—now.

Koji Muraoka, a 51-year-old businessman in southern Japan, lives in an area that could be engulfed by over 17-meter tall waves should the Nankai Trough mega earthquake cause a tsunami.

“That tsunami could come within 14 minutes, so I look at hazard maps and remember escape routes,” he told VICE World News. Following these recent earthquakes, he’s checked evacuation plans and ways to communicate with loved ones in the event phone lines go down.

“I have a backpack with clothes, shoes and other daily necessities for when I need to go to the shelter,” he said.

Seiko Yamazaki, an emergency response instructor who lives in the greater Tokyo area, said the trauma of experiencing the 2011 Tohoku earthquake—which triggered devastating tsunamis, the meltdown of nuclear power plants in Fukushima prefecture, and killed more than 18,000 people—is still with her today. She said she was on her way home from picking up her children from nursery school when the ground suddenly shook. “It was the first time I’d experienced such a huge tremor, and I had no idea how to protect my children,” she told VICE World News.

Her naivete, she said, is what pushed her to teach herself about disaster preparedness. In addition to becoming a registered instructor of emergency response, she bought devices that prevent furniture from falling, shatterproof glass sheets to place in windows, and a radio in the event of disasters.

“After experiencing the Great Tohoku Earthquake, all the furniture I’ve purchased is shorter than myself—less than one meter in height,” she added. Other items that are placed higher than Yamazaki’s height are fixed with adhesive.

The Nankai Trough is an ocean-floor trough that extends from central Shizuoka prefecture to the southern island Kyushu. This trench is where the Philippine sea plate and the Eurasian plate, two tectonic plates that sandwich Japan, meet. The feared Nankai Trough mega earthquake is a tremor with its epicenter at these plates’ meeting point, where quakes have historically happened in 100- or 150-year intervals.

The last quake to have shaken this region of Japan was the 1946 Nankai earthquake, killing 1,362 people. The one predicted to hit Japan within the next 30 years would find 230,000 dead in the worst case scenario, with tsunamis swelling 10 meters high.

Though the predicted catastrophes of the Nankai mega earthquake are alarming, scientists say the recent tremors probably have little to do with the “big one.”

Koshun Yamaoka, a seismologist and environmental studies professor at Nagoya University, said the earthquakes in southern Kagoshima’s island chain and eastern Yamanashi Prefecture will have no effect on the Nankai Trough.

“The former series of earthquakes is simply too far from the Nankai Trough to have an effect, and as for the latter—the earthquake happened on the other side of the Izu Peninsula, which is the border for two separate plates, so it had no effect,” he told VICE World News.

“The earthquake in Wakayama Prefecture is a bit harder to tell, but I think we can ignore the effect it could have on the Nankai Trough because its magnitude was too small to have an impact,” he said.

Schools also carry out their own earthquake drills regularly, a requirement by law. At southern Tokushima Prefecture’s Shikoku University, students participated in its most recent Nankai Trough mega earthquake drill on Dec. 7.

Yoshiyuki Sano, the school’s corporate affairs director who helped carry out the drill, told VICE World News that given his school is near the ocean, a tsunami with waves five meters or higher—triggered by earthquakes with magnitude 6 or above—could inundate the school within 40 to 50 minutes.

After hearing the campus announcement, students gathered in the school’s evacuation site and practiced using fire hydrants, should a fire occur from the tremor. Sano said students responded well to the drill. “Three days before we had the drill, there was a 4.0-magnitude earthquake near here. For that reason, I think the students took it quite seriously, more than we had anticipated,” Sano said.

Sano said he was in the Fukushima prefectural office the day of the 2011 Tohoku earthquake. He recalled how everything about him fell, and having to escape from the office’s 11th floor, filled with fear. “I was prepared to die. But—and this is the truth—I remember hoping to die painlessly, and thinking there was nothing to be done,” he said.

No one knows when precisely the “big one” is coming, the uncertainty only adding to the growing likelihood that Japan will be rocked to its core.

But for Muraoka, the 51-year-old businessman who’s prepared to run with his emergency grab-and-go bag at any time, even if he lives just a stone’s throw away from waves that could potentially engulf his entire life, there’s no other place he’d call home.

“I know it’s strange, but I continue living here because this is the hometown I love,” he said.