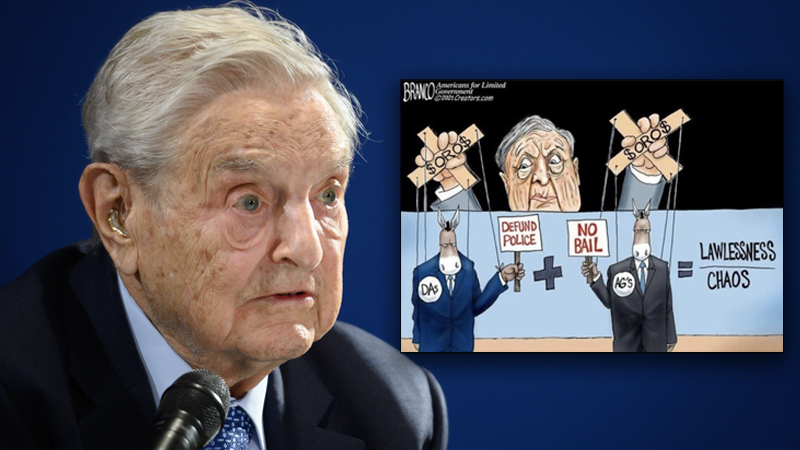 A political cartoon showing leftist billionaire George Soros as a puppeteer of radical criminal reform policies in inner cities has been decried as “antisemitic” by the Anti-Defamation League.

“As we have told @FoxNews numerous times, casting a Jewish individual as a puppet master who manipulates national events for malign purposes conjures up longstanding antisemitic tropes about Jewish power + contributes to the normalization of antisemitism. This needs to be removed,” the ADL tweeted on Wednesday.

As we have told @FoxNews numerous times, casting a Jewish individual as a puppet master who manipulates national events for malign purposes conjures up longstanding antisemitic tropes about Jewish power + contributes to the normalization of antisemitism. This needs to be removed. pic.twitter.com/gyWTrSvNtR

However, the comic in question makes no mention or even hint about Soros being Jewish.

As a practical matter, the comic depicting Soros steering criminal reform policy through Democrat DAs and AGs is not in dispute.

Soros has donated tens of millions of dollars into the campaigns of numerous DAs and AGs across the country advocating radical decriminalization policies like eliminating bail.

The resulting elections of these far-left officials has resulted in skyrocketing crime rates, especially in the blue cities these officials were elected in.

Users on Twitter noted the reach by the ADL and responded accordingly.

So to be clear, you’re not refuting the influence of George Soros’ money, you’re just complaining that portraying it is antisemitic?

Thanks for the new definition of antisemitism: Critique of a billionaire with massive engagement in politics and nearly unparalleled political donations. It will certainly help the discourse a lot.

But in this case it’s what’s actually happening

So we can claim that someone is influencing world events for malign purposes, but only if they’re not Jewish? That isn’t weird at all.

Notably, Soros in 1999 actually bragged on “60 Minutes” about collaborating with the Nazis as a 14-year-old boy to seize the belongings of fellow Jews.

As they try to build a racial straw man in this case, they also ignore other obvious racial crimes because they don’t fit with their “white supremacy” narrative.

For example, the ADL tried downplaying the racially-motivated deadly terrorist attack by black nationalist Darrell E Brooks, who plowed into a crowd of people at a Christmas parade in Wisconsin last month, falsely claiming Brooks does not “subscribe to an extremist ideology.”

According to our experts, the suspect who drove into a Christmas parade in Waukesha. WI, killing 6 & injuring dozens more shared antisemitic content on social media in 2015, but he does not appear to actively subscribe to an extremist ideology. More: https://t.co/3siqs55j5W