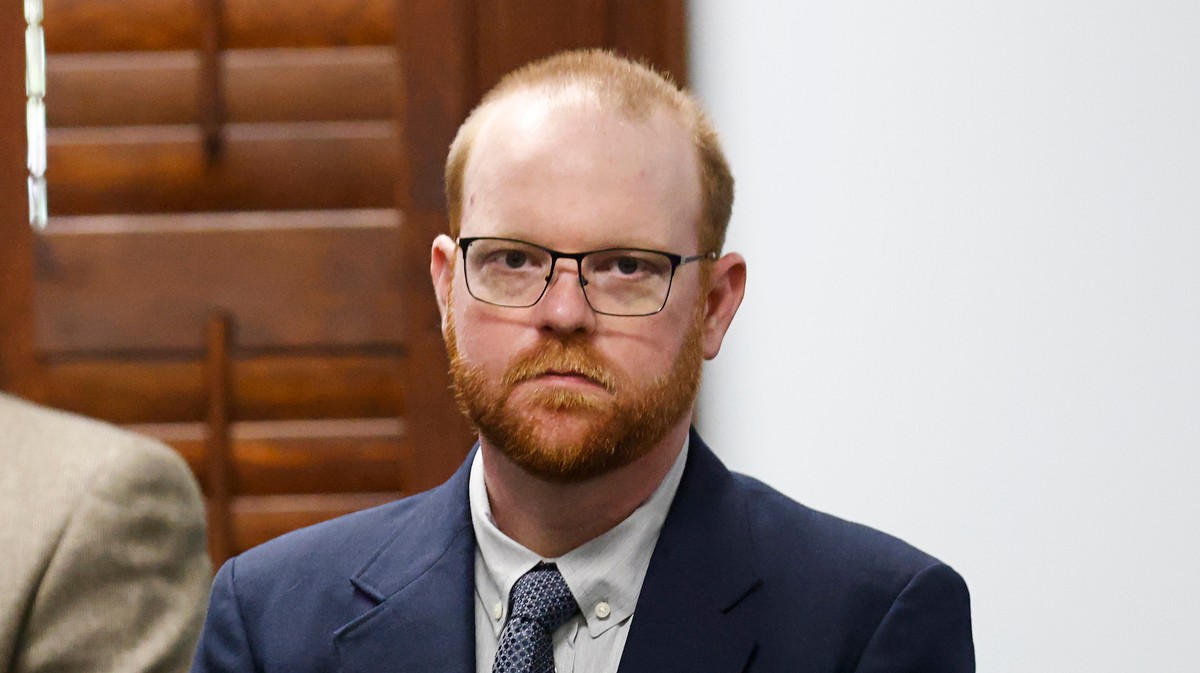 Travis McMichael attends the jury selection in his trial together with Gregory McMichael and their neighbor, William “Roddie” Bryan, at the Glynn County Superior Court, on October 27, 2021 in Brunswick, Georgia. (Photo by Octavio Jones-Pool/Getty Images)

Travis McMichael, one of the men who pursued Ahmaud Arbery in their trucks—one with a Confederate flag vanity plate—testified Wednesday that he shot Arbery during the ensuing confrontation because he believed Arbery was trying to take his gun.

“He had my gun,” McMichael said on the stand at the Glynn County, Georgia, courthouse. “He struck me. It was obvious that he was attacking me, that if he would have gotten the shotgun from me, this was a life-or-death situation.”

At times crying as he testified, McMichael, who shot 25-year-old Arbery twice at close range, insisted he never intended to harm him and even tried to deescalate the situation before pulling the trigger.

“If you pull a weapon on someone, from what I’ve learned in my training, that usually causes someone to back off or realize what’s happening,” McMichael told jurors, referring to his time serving in the U.S. Coast Guard.

But at the moment of the shooting, McMichael said Arbery went for his gun, leaving him no other choice. “He grabs the shotgun and I believe I was struck,” he said. “I was thinking of my son. It sounds weird, but it was the first thing that hit me.”

“What did you do?” defense attorney Jason Sheffield said.

“I shot him,” McMichael said.

McMichael’s three-hour testimony marked the first time any of the three defendants have talked about the fatal shooting in Brunswick, Georgia.

“I want to give my side of the story,” McMichael said at the start of his testimony. “I want to explain what happened and to say what happened from the way I’d seen it.”

McMichael spent the majority of his testimony describing his mindset in the months leading up to the day Arbery was killed, before speaking about the day of the shooting itself, Feb. 25, 2020.

He said that shortly after moving into his parents’ home in September 2018, his truck was broken into several times, in October of that year and again in February 2019. He also had a pistol stolen from his truck in January 2020. And he wasn’t the only person with this problem. Break-ins, trespassing, and reports of stolen goods like purses and guns became a common topic of conversation among his family and in the neighborhood’s Facebook group.

“You’d hear of people in the yards, suspicious persons, I’ve heard of trailers stolen,” McMichael said. “Little stuff like that, it was continuous. Every couple of months, you’d hear of something else.”

McMichael had seen a man at a vacant property in the neighborhood the night of Feb. 11, and he allegedly fit Arbery’s description. He testified that the man had reached into his waistband for what McMichael assumed was a gun, and that led him to believe this person might be dangerous.

It was this series of crimes and the Feb. 11 incident that informed his decision to chase Arbery as he jogged through the neighborhood 12 days later, along with his father Gregory. When Gregory said he saw Arbery running from the home and then saw neighbor Matt Albenze looking out in the same direction, McMichael assumed they’d be chasing after a prime suspect. They jumped in their pickup and followed Arbery, and their neighbor William “Roddie” Bryan Jr. followed in his truck.

“I thought it was reasonable that there was something to this,” McMichael said. “Matt may have just seen him, either caught him breaking in, stealing something.”

McMichael shared the extent of his Coast Guard training during his decade with the force and spoke about two instances where showing a weapon he legally owned successfully deescalated the situation: an attempted robbery in 2008, and an attempted carjacking in 2011.

McMichael believed that brandishing a weapon would would stop Arbery in his tracks. When the first shot he fired didn’t stop Arbery from wrestling with him over the weapon, Travis said he pulled the trigger again.

“He was still all over that shotgun and he was not relenting. So I shot again.”

“The second shot, I shot again because I was still fighting,” McMichael said. “He was still all over that shotgun and he was not relenting. So I shot again to stop him. That third shot he disengaged, and at that point he let go, he turned and continued to run down Satilla.”

“At that point I was in shock,” he continued, again through tears. “I turned around, we got over there and pulled his hand from under him and realized that he was deceased.”

Travis McMichael, Gregory McMichael, and their neighbor William “Roddie” Bryan, all white men, are each facing nine charges, including murder.

Arbery’s injuries were catastrophic from the first shot, as video showed blood spurting from an artery in his wrist, and he was likely dead before he hit the pavement, the medical examiner testified Tuesday.

If found guilty, each man could face life in prison.