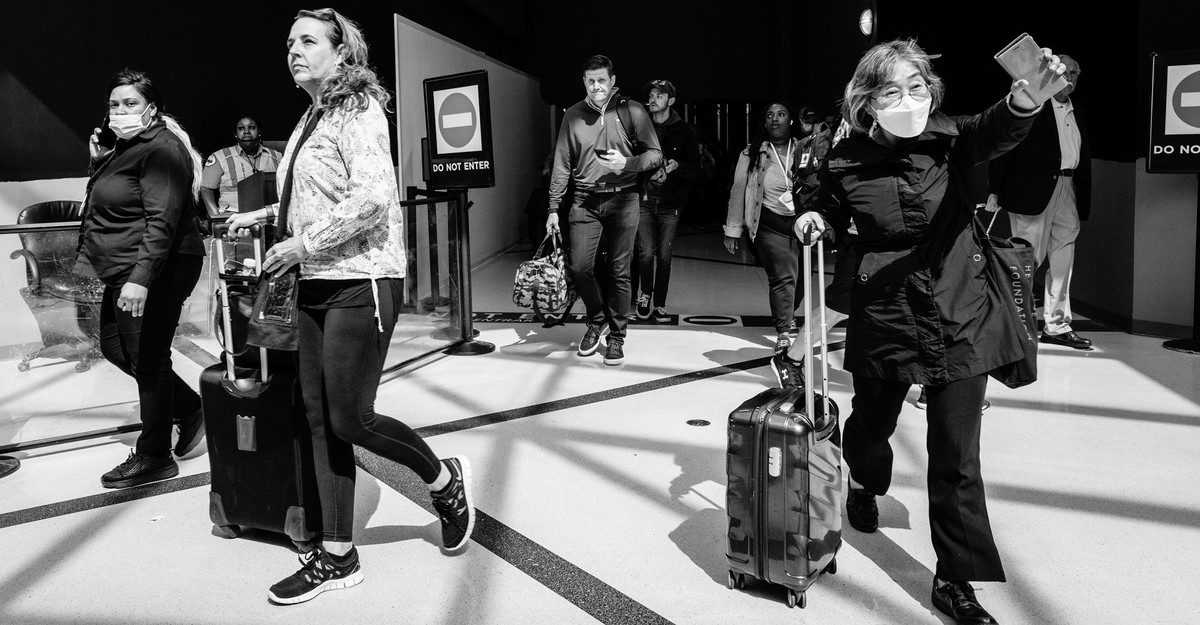 “The very first symptom of the general collapse was an old one: nothing worked.” The sentiment is old—it comes from Doris Lessing’s 1969 novel, The Four-Gated City—but it’s hard to think of a better epitaph for the economic vibes of 2022. From the oil markets to the baby-formula markets to the general sense of safety and disorder, the U.S. seems to suffer from chronic Nothing Works Syndrome.

The latest victim of acute NWS is air travel. Around the world, security lines are getting brutally long and cancellations and delays are spiking. The major carriers JetBlue, American Airlines, and Delta canceled nearly 10 percent of their flights last weekend, creating mayhem at major airports.

In an interview for my podcast Plain English, I spoke with Scott Keyes, the founder of the Scott’s Cheap Flights newsletter, about why air travel has been such a mess this summer. This transcript has been edited and condensed.

Scott Keyes: The amount of turmoil in the airline industry over the past two years is unlike anything we’ve ever seen in travel. The 9/11 attacks caused a 7 percent drop in overall travel. But 2020 travel was down 70 percent. Airlines were worried about surviving. That meant laying off staff, shedding pilots, selling airplanes, and retiring aircraft. Now, as travel rebounds, we are paying the price.

Delta shed 30 percent of their employees—almost 30,000 people cut from their staff. American Airlines laid off 30 percent of their staff, through buyouts, early retirements, or otherwise. Airlines were trying to become as lean as possible to reduce those operating expenses with the anticipation that they were not going to be making much money. They also retired older planes.

Those decisions certainly helped improve the balance sheet throughout 2020. But would they have made the same call if they had known how quickly travel demand would rebound? Almost certainly not. They assumed that this was going to be a six-year recovery period, not an 18-month recovery period. So when travel demand started rebounding much quicker than they anticipated, the airlines were caught flat-footed.

Thompson: Why is it taking so long to adjust? Why is it so hard to hire pilots or bring back more airplanes?

Keyes: Being a pilot is not an entry-level job. It takes years of training. There are many regulatory requirements, like a mandatory retirement age for pilots: 65 years old. There are mandatory training requirements for U.S.-based pilots. They have to fly 1,500 hours before they’re allowed to pilot those commercial planes.

Similarly, Boeing doesn’t have tons of 787s or 737s sitting in a warehouse waiting for airlines to come pick them up. There’s a years-long delay in a manufacturing process plagued with supply-chain disruptions, just like so many other parts of the economy.

Thompson: The industry is so woefully understaffed that whenever there’s a storm, or a pilot who calls in sick, there’s no redundancy or resiliency in the system, and you get these cascading cancellations. But wasn’t it obvious 18 months ago that we’d have vaccines? Wasn’t it obvious six months ago that Americans wanted to get out of the house? Why is all this mayhem happening now?

Keyes: There’s a labor-supply issue, not just for airlines but also the TSA. If you live in Milwaukee and you’re looking for an entry-level job, you could become a transportation security officer for $19.41 an hour, or you could go on Amazon’s website and see that there’s a job in the area for $19.50. Would you rather help load and unload bags outside in the dead of winter in Milwaukee, or work in a climate-controlled environment in a warehouse for Amazon? That’s the trade-off a lot of folks are making. Labor shortages cause delays and cancellations. In normal times, airlines might have a reserve crew of pilots or flight attendants that they can call in. But now there is not the reserve in place to bridge the gap. The result is a huge swath of delays and cancellations.

Keyes: Today’s airline that gloats about not having cancellations is tomorrow’s airline that’s experiencing a meltdown. I don’t want to pretend that Spirit and Frontier don’t experience meltdowns. They absolutely do. That said, a few factors can explain why we’re seeing higher rates of cancellations among legacy full-service airlines. First, many of the budget airlines like Spirit already trimmed their summer schedules when they realized they didn’t have enough pilots and crew to operate the schedule they had planned. The legacy full-service airlines can suffer sometimes from hubris.

Second, many of the legacy airlines have hubs in crowded corridors like New York, Chicago, and Boston, which can suffer from compounding cancellations when there’s a thunderstorm [which are more common in the summer]. Those cancellations beget more cancellations. A flight from JFK to Miami that gets canceled results in a further cancellation for that flight out of Miami.

Thompson: Has anything changed about air travelers? Are we doing something different in 2022 that is contributing to these delays?

Keyes: Leisure travel has fully rebounded, whereas business travel is still down 30 percent. Now, why does that matter? Because leisure travelers tend to be more inexperienced when it comes to travel. They need more support from the airlines handling their itinerary ahead of time. They might need more time going through security. They don’t remember to take their shoes off or to take their laptop out. When each person takes an extra 20 seconds, you multiply by 3,000 passengers, and these little micro events matter at scale.

Relatedly, the two airports with the biggest growth since the summer of 2019 are Miami, up 17 percent, and Las Vegas, up 10 percent. San Francisco is down 26 percent. Detroit is down 25 percent. Chicago O’Hare is down 18 percent. The business-heavy destinations are down, and the leisure destinations are up.

These changes have bigger knock-on effects for some airlines than others. Historically, the budget airlines have had the leisure traveler as their bread and butter. Spirit Airlines does not have a significant amount of business travel within its portfolio. Conversely, American Airlines and Delta make the most money from business travelers, who are up to seven times more profitable on a per-person basis. And they orient their entire operation around serving those business travelers and fly more to Chicago, San Francisco, and New York.

Because a pandemic came along that crushed business travel, Delta and American and United are now playing away games. The budget airlines have home-field advantage. And budget airlines have basically eaten all the growth over the past three years. Allegiant [flights] are up 17 percent since 2019. Spirit is 7 percent. Frontier is up 6 percent. Whereas Delta, United, American are down.

Thompson: To what extent do you think regulatory policy is making America’s airlines particularly fragile to the sort of problems we’re currently experiencing?

Keyes: One of the front-and-center issues discussed in the airline industry right now is this question of pilot training. Is 1,500 hours the proper amount of air time we should be expecting from pilots before we certify them to fly commercial jets? On the one hand, it’s easy to say, “You can’t be too careful.” Just imagine the attack ads if somebody votes to decrease the training requirement, and then all of a sudden there’s a crash. The optics are horrendous. On the other hand, the U.S. is a bit of an outlier. Most other countries do not require anything near this level of training ahead of being certified. The U.S. historically has not required that level of training. And we let foreign pilots fly to JFK and SFO and LAX without this requirement. All that said, there’s still no quick overnight fix that will immediately get you more flights, more pilots, and a greater supply of air travel. Certainly not for this summer.

Thompson: So when does this end? When can we expect traveling to feel more normal?

Keyes: Cheap flights aren’t gone forever. They’re just gone for this summer. The rolling delays and cancellations you’re seeing are predominantly a side effect of the demand for travel right now. So many folks are making up for trips they haven’t been able to take over the past couple of years, and summer’s always the most popular time of year to travel. By mid-September and beyond, you have less people traveling. We’ll have more pilots and planes in reserve to be able to come in when there is a thunderstorm, or an IT meltdown. We’ll have more reserves to help prevent a catastrophic wave of cancellations and delays. So, bad news for the short term. Good news for the fall and beyond.