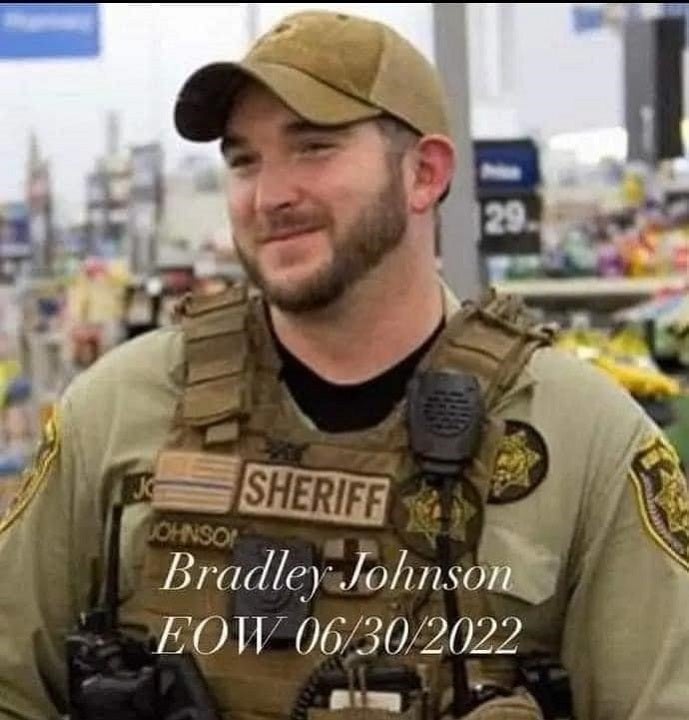 “It’s been said that a coward dies a thousand deaths, but a hero but one,” Bibb County Sheriff Jody Wade told reporters. “Brad Johnson was a hero.”

He added that investigator Chris Poole is recovering after being released from the hospital. In a statement, Alabama Gov. Kay Ivey said Johnson will be remembered as a hero.

Bibb County Sheriff’s Deputy Brad Johnson died after being shot while pursuing a suspect, authorities said. Another deputy who was shot is recovering and the suspected shooter has been arrested.
(Alabama Law Enforcement Agency)

“Today, all of Alabama grieves the loss of one of our heroes in blue, Bibb County Deputy Brad Johnson,” she said. “At only 32 years-old, he served in law enforcement for several years and was engaged to be married. He will be remembered as a hero.”

“He will not only be called a hero for protecting his community, but also through his organ donations,” she added. “Our entire state is praying for his family, his fiancé and fellow law enforcement officers.”

The shooting occurred around 5 p.m. as the deputies were chasing a stolen car. The suspect, identified as 26-year-old Austin Patrick Hall, was the subject of a “massive” manhunt after he fled the scene, authorities said Thursday.

He was arrested by the U.S. Marshal’s Service Thursday morning and remains in jail. He is being held by the Shelby County Sheriff’s Office for attempted murder, and assault on a police officer with a gun.

Johnson was a 7-year veteran of the sheriff’s office and leaves behind a fiancee and two children, Alabama Attorney General Steve Marshall said in a statement.

He also noted that Hall has a lengthy criminal history.

“My Office is closely scrutinizing the policies that allowed for a violent offender, like Hall, to walk free,” Marshall said. “The justice system failed these officers and I will do everything in my power to ensure that doesn’t happen again.”