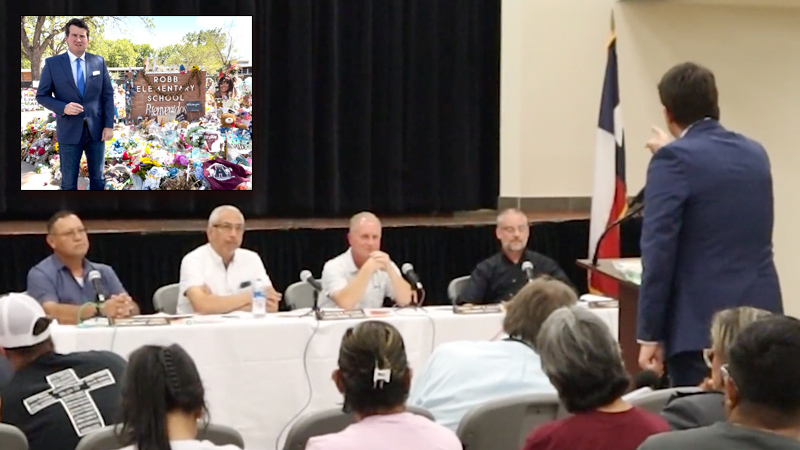 Comedian Alex Stein changed gears when he addressed the Uvalde City Council, calling out the lack of police action during a mass shooting last month that claimed the lives of 19 students and two educators.

Speaking at the Uvalde City Council meeting to hold the city leaders accountable for the mistakes that were made on one of the worst days in American history. pic.twitter.com/vvzgl77Ymu

At one point, when Stein discussed Robb Elementary’s principal knowing about security issues, one city council member interrupted him to say the city council was not the school district, in turn setting Stein off.

“Listen, I understand you’re not the school district, but this is your city. Are you the leader of this city?” Stein asked the council member.

“Do you lead this city?” he asked again, as the council member shook his head.

“You’re telling me the city council [are] not the leaders of this city? Is that what you’re telling me? So you guys don’t consider yourselves leaders? See that’s why…

“It’s because you don’t consider yourself a leader, you don’t take responsibility for your action that’s why you sit there and that’s why you are a direct reflection of these cops. They were cowards!” Stein told the council member, as the audience in attendance began applauding. “It took them 77 minutes, and you’re a coward! You sit there like a coward trying to combat what I’m saying. I’m bring awareness to your city.”

Stein continued to lambaste the council over their lack of leadership and criticized bizarre police actions caught on surveillance cameras as the mass shooting took place.

The comedian made waves earlier this month when he trolled Democrat Congresswoman Alexandria Ocasio-Cortez (NY) on the steps of the US Capitol, with AOC later admitting she’d wanted to commit violence against him.