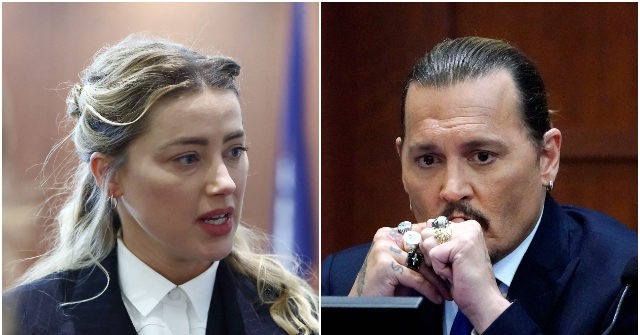 Aquaman star Amber Heard left “defecation” in Johnny Depp’s bed after an argument — a move she referred to as “a horrible practical joke gone wrong” — the actor’s bodyguard testified under oath on Thursday at the Depp-Heard defamation trial.

Depp’s bodyguard Starling Jenkins told the court on Thursday that he and Heard “had a conversation pertaining to the surprise she left in the boss’ bed prior to leaving the apartment” while he was driving the actress to Coachella one day in 2016.

When asked to clarify what he meant by “the surprise,” Jenkins specified, “The defecation.”

And that the next day she went to Coachella, where she “got sick” on “magic mushrooms and red wine.” pic.twitter.com/lAEfJDt6a2

Depp’s bodyguard went on to say that Heard had referred to the defecation as “a horrible practical joke gone wrong.”

Jenkins’ testimony corroborates Depp’s claim in the courtroom last week that Heard or one of her friends had defecated in their bed after an argument in which he said he was leaving her.

During his testimony, Jenkins also said that Heard “got sick” on “magic mushrooms” and red wine while attending Coachella.

“She was eating the magic mushrooms and drinking red wine on an empty stomach,” he said.

Jenkins also testified that before leaving for Coachella, Heard threw Depp’s belongings — including his phone — off the balcony and onto the street.

The bodyguard explained how he tracked Depp’s phone using the Find My iPhone app, and eventually found the actor’s phone “on skid row,” in the possession of a homeless man, who he paid off with “$420, chicken tacos, chips, apples, [and] Fiji water” to get the phone back.

Johnny Depp’s bodyguard explains how Amber Heard threw his belongings —including his phone—off the balcony after an argument.

He used Find My iPhone to track Depp’s phone, which was in the possession of a homeless man, who he paid off with “$420, chicken tacos and Fiji water.” pic.twitter.com/D0xmgdbBcF

Depp, who is suing Heard for defamation, has also claimed the actress threw bottles of vodka at him during an argument, which resulted in his middle finger being severed by broken glass. Depp also claims Heard put a cigarette out on his face.

On Monday, a shocking audio recording played in the courtroom revealed Heard telling Johnny Depp to “tell the world” he is a male victim of domestic violence, and see how many people “believe” him.

“See what the jury and judge thinks,” Heard says in the audio recording. “Tell the world, Johnny, tell them, ‘Johnny Depp, I, a man, I’m a victim, too, of domestic violence’ — and see how many people believe or side with you.”

“See what the jury and judge thinks — tell the world, Johnny, tell them, ‘I, Johnny Depp, a man, I’m a victim, too, of domestic violence,’ and see how many people believe or side with you.” —Amber Heard pic.twitter.com/8aMCxtKpz9

Depp’s libel lawsuit claims that a 2018 piece Heard wrote in the Washington Post — in which she referred to herself as a “public figure representing domestic abuse” — has harmed his movie career.

The Pirates of the Caribbean star, who has denied Heard’s allegations of abuse, is seeking $50 million in the defamation suit to compensate for the damage done to his career. Heard is countersuing for $100 million.