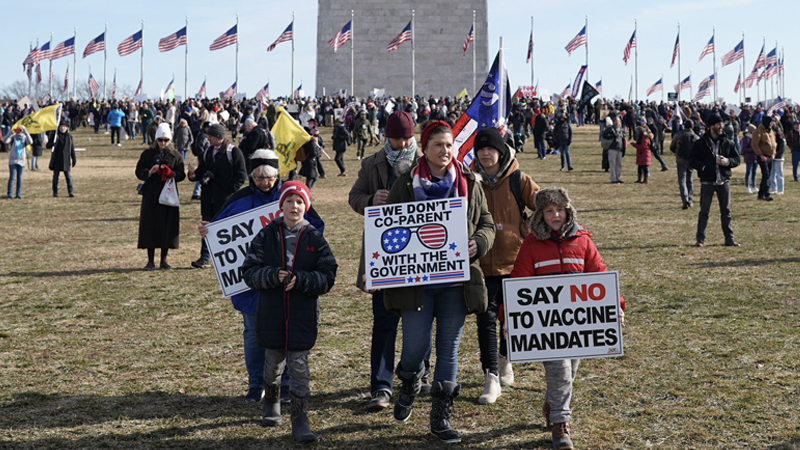 Tens of thousands of Americans are descending on the nation’s capital on Sunday to protest vaccine mandates and COVID tyranny waged by the Biden administration.

The “Defeat The Mandates: An American Homecoming” describes itself as a “peaceful, apolitical, internationally-syndicated community demonstration dedicated to emboldening grassroots citizens to push back against Covid-related restrictions in their own local cities.”

The march begins from the Washington Memorial to the Lincoln Memorial a mile away, where featured guests will be waiting to deliver remarks at approximately 12:30 EST.

The massive protest was organized by the Children’s Health Defense, Vaccine Safety Research Foundation, the International Alliance of Physicians and Medical scientists, and the Frontline COVID-19 Critical Care Alliance.

Defeat the Mandates marchers chant “My Body My Choice” pic.twitter.com/JidcHM2smd

Some of the signs at today’s “Defeat the Mandates” rally.

“Defeat The Mandates” marchers currently marching from the Washington monument to the Lincoln Memorial where speakers such as Dr. Robert Malone are set to speak pic.twitter.com/dLYSZDJUfm

Stage is set up for #DefeatTheMandates that is planned to be held today outside of Lincoln Memorial. They secured a permit for 20,000 people but are expecting tens of thousands to attend from across the US. pic.twitter.com/vDefsGG7HO

This might be one of the best signs I’ve seen so far at the Defeat The Mandates rally: “STOP KAREN.” pic.twitter.com/kqmcfosQCq

Crowds gather for the Defeat the Mandates March here in DC pic.twitter.com/8zhvlBoLSP

WATCH: An unhinged woman screams obscenities at those attending the Defeat the Mandate rally in Washington D.C.pic.twitter.com/q6LgX7os15

This also comes after Washington, D.C. Mayor Muriel Bowser banned the unvaccinated from the city entirely as part of the Democrats’ plan to divide America into a two-tiered society.

Videos from the Defeat The Mandates protest: