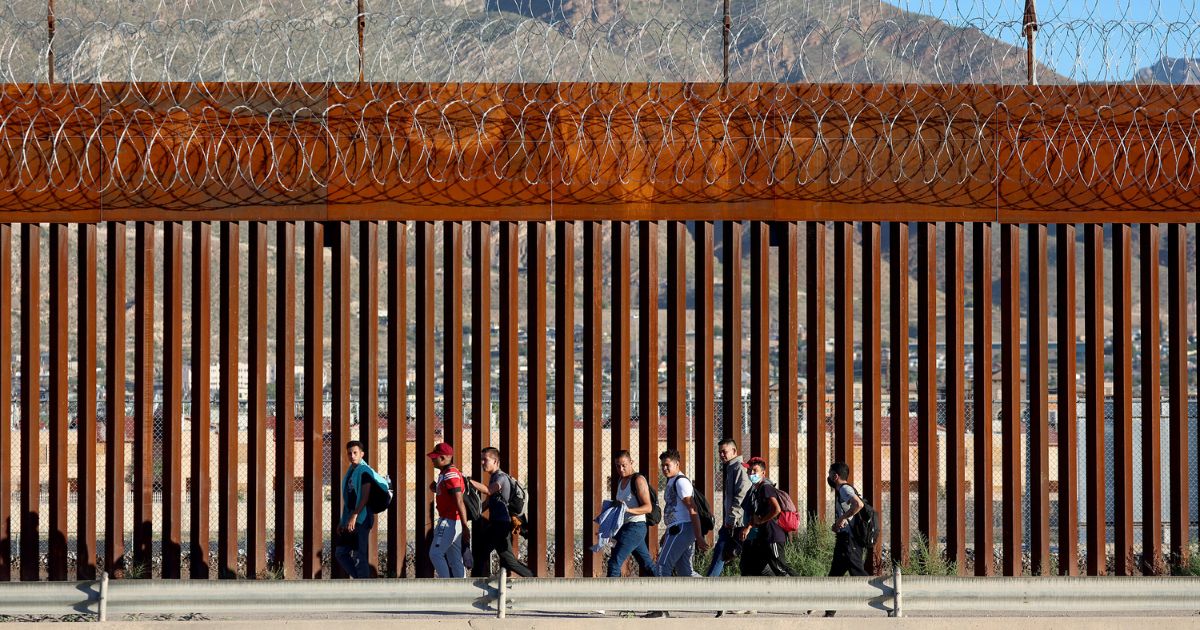 If President Joe Biden won’t let the Border Patrol fix the border crisis, maybe it’s time that their wives step into the fray.

Not as agents, mind you. No, Irene Armendariz-Jackson, Mayra Flores and Cassy Garcia have a different idea.

All three Hispanic women, all married to Border Patrol agents, are running as Republicans in border districts against Democrats who have, to varying extents, enabled the administration’s lax border policies.

As the Washington Examiner’s Anna Giaritelli put it, the three Texas candidates are “determined to give a voice to the 20,000 federal law enforcement agents who have apprehended illegal immigrants 3.6 million times since President Joe Biden took office.”

At least one of the Border Patrol wives has already gotten into Congress: Flores, who won a special election in Texas’s 34th Congressional District earlier this year. She will encounter a tougher challenge in November, however, when she faces Democratic Rep. Vicente Gonzalez Jr., who’s running against her due to redistricting.

Don Lemon Has Audacity to Suggest to Royal Analyst the Monarchy Should Pay Reparations, Immediately Regrets It

According to Ballotpedia, the newly drawn district would have gone heavily to Joe Biden in the 2020 election, with the president taking over 57 percent of the vote.

However, Flores managed to win the special election by tapping into Latino frustration with Democrats, including on illegal immigration. In the general election, she’s continued to hammer Democrats on border security.

“We have a border that is completely out of control,” Flores said, according to the Examiner.

“It’s not just a humanitarian crisis. It’s also a national security crisis. … Our Border Patrol are focused on women and children. They’re not able to focus on the terrorists coming in,” she said.

Hispanics are commonsense voters. We believe in the American dream and hard work, personal responsibility, and the importance of faith.#TripleThreat #TheAmericanDream @CasandraLGarcia@MayraFlores2022@monica4congresshttps://t.co/IFbjEqnjtW pic.twitter.com/ebk1VTNHzC

Garcia, meanwhile, beat out six other Republicans to get a shot at replacing Democratic Rep. Henry Cuellar, a fixture in Congress since 2005.

Cuellar — whose expansive district stretches from the border in Laredo to the city of San Antonio — has occasionally made token protests against unfettered illegal immigration. However, he’s been a vigorous opponent of any kind of border fence.

In 2017, he criticized then-President Donald Trump for threatening a government shutdown to “build his symbolic border wall” and said Trump “wants to punish the American people.”

“President Trump should be leading the nation, and encouraging investment in border security measures that actually work,” Cuellar said.

A Fox News Reporter Is Driving the White House Crazy by Exposing the Truth About the Border, Biden Insiders Say

Yes, and that would have been a border wall. The fact it wasn’t built has made life considerably harder for agents like Garcia’s husband, who has served with the Border Patrol for 26 years.

“The support they’re not receiving from the administration — it’s unbelievable,” said Garcia, a former aid to GOP Sen. Ted Cruz.

The Republican candidate also mocked the administration’s attempts to deal with illegal immigration by assigning Vice President Kamala Harris the task of investigating the “root causes” of unlawful migration.

Is the border the most pressing issue for the next election?

“I think she’s still trying to figure out the root causes, right? We know what the root causes are, right? They’re not enforcing laws,” Garcia said, according to the Examiner.

As for Armendariz-Jackson, her husband retired from the Border Patrol after 24 years because he refused to comply with the Biden administration’s COVID-19 vaccine mandate.

“Due to Biden’s tyrannical vaccine mandate, he has had to take an early retirement. He has served El Paso & America well — he truly loved his job. This is a sad day for our family,” she said in a December 2021 tweet thread.

“My husband was lucky enough to be able to take an early retirement, but many are simply having to quit. It is wrong & pitiful,” Armendariz-Jackson continued.

“What we inject into our bodies is our choice. This is a major part of why I’m running for Congress in Texas’s 16th district. Our country deserves better than this. The men and women who served us at [Customs and Border Protection] & in the armed forces deserve better.”

After 24 years, today will be my husband’s last day serving as a Border Patrol agent.

Due to Biden’s tyrannical vaccine mandate, he has had to take an early retirement.

He has served El Paso & America well — he truly loved his job.

This is a sad day for our family. pic.twitter.com/R1aJodVYey

Armendariz-Jackson left her job as a real estate agent to challenge Democrat Rep. Veronica Escobar. She replaced Beto O’Rourke after the then-representative embarked on a life’s journey to serially lose every higher office he could possibly run for.

While Escobar hasn’t engaged in some of Beto’s more grating habits — such as livestreaming his dental appointments to seem hip to the kiddies — she’s no better on policy issues, particularly illegal immigration.

Undocumented immigrants in El Paso and Texas contribute billions of dollars to our economy and comprise a disproportionate share of workers in essential industries yet they are being denied access to the support they need during this crisis.https://t.co/BMorzbuztG

Escobar, who once cosponsored legislation that would have decriminalized illegal border crossings, has repeatedly clashed with GOP Texas Gov. Greg Abbott over his response to the border crisis.

According to The Texan, Escobar called Abbott’s mobilization of the Texas Department of Public Safety and National Guard to the border in July “unconstitutional, dangerous, and irresponsible” and instead suggested that “[i]ncreasing legal pathways will help mitigate some human trafficking.”

In short, any of these three Republican women would be marked improvements over their rivals.

For the first time ever, arrests of illegal immigrants trying to cross at the nation’s southern border — euphemistically referred to by the sterile term “encounters” — has reached 2 million so far this fiscal year, according to the New York Post. And those, mind you, are the ones who were caught.

The Democrats don’t want a wall, they don’t law enforcement mobilized to deal with the crisis and they certainly don’t want to support the Border Patrol.

There’s only so much individual agents can do. Their wives, however, might be able to do a great deal more — if they get elected.