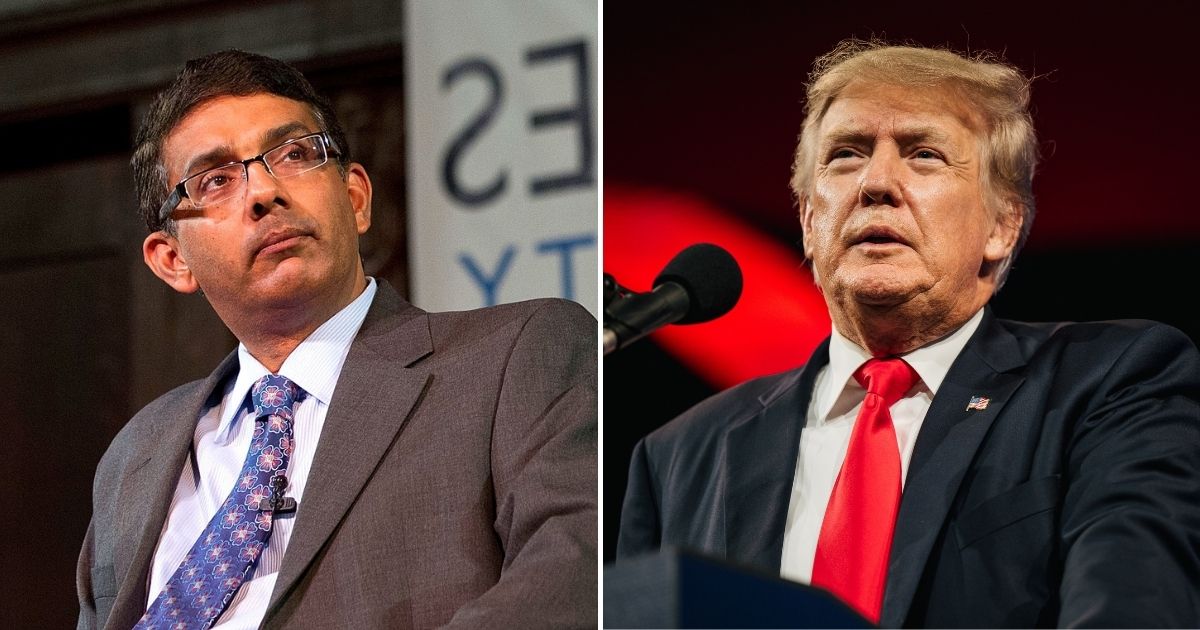 Former President Donald Trump touted the release of a trailer for conservative filmmaker Dinesh D’Souza’s latest project, “2,000 Mules,” saying the evidence it presents about alleged wrongdoing that occurred in the 2020 general election is “so damning.”

“Highly respected Dinesh D’Souza, working together with Catherine Engelbrecht of True the Vote, just released a trailer to their new movie, ‘2,000 Mules,’ that shows the world exactly how the 2020 Presidential Election was Rigged and Stolen,” Trump said in a Monday statement.

“The movie exposes the lies of the Democrats, RINOs, and Fake News who say it was the ‘most secure election in history.’ It was, perhaps, the least secure in history,” he added.

“The ballot box was stuffed, and stuffed like never before — and it’s all on video. Ballots were trafficked and sold in a massive operation in each Swing State,” Trump said.

“Highly respected Dinesh D’Souza, working together with Catherine Engelbrecht of True the Vote, just released a trailer to their new movie, “2,000 Mules,” that shows the world exactly how the 2020 Presidential Election was Rigged and Stolen… pic.twitter.com/XOyMesof1W

The 45th president lambasted those who did nothing to counter what he described as a “stolen election.”

“The evidence is so damning, what will the cowards who sat and did nothing about the stolen election say now?” Trump asked.

“The way our votes were taken away is a disgrace to our Nation. It must be fixed.”

D’Souza’s trailer has already garnered over 1 million views on his Rumble channel.

“We tracked 2000 mules making multiple ballot drops, leaving no fingerprints, snapping photos to get paid, a coordinated ring of illegal vote harvesting in all the key states where the election was decided,” D’Souza says in the film.

The trailer includes footage of drop boxes, apparently used during the 2020 election, in which it appears people dropped multiple ballots at a time.

It highlights the states of Arizona, Wisconsin, Michigan, Pennsylvania and Georgia, on a map as places where this alleged illegal conduct occurred.

“Game over,” D’Souza says at the end of the trailer.

“There is no evidence of widespread voter fraud.”

Georgia Secretary of State Brad Raffensperger confirmed last month that his office is investigating allegations that large-scale illegal ballot harvesting took place during the 2020 general election in his state.

The investigation came in response to complaints filed by True the Vote in November.

The group said it had “assembled evidence that scores of activists worked with nonprofit groups to collect and deliver thousands of absentee ballots, often during wee-hour operations, to temporary voting drop boxes distributed around the state during the pandemic,” Just the News reported.

Georgia law required ballot drop boxes to be under 24-hour video surveillance, according to Raffensperger.

True the Vote reportedly obtained access to some of the video footage through an open records request when it began its investigation.

More than 40 percent of the alleged drop-offs occurred between midnight and 5 a.m., the group said.

Ballot harvesting is illegal under Georgia law, which requires absentee ballots to be either mailed in or personally delivered unless the voter is disabled, in which case a family or household member can deliver the ballot.

True the Votes says on its website it will be releasing “shockingly similar findings” in five additional states.

Separate from True the Vote’s efforts, Republican lawmakers in Wisconsin are currently investigating the role a non-governmental organization called the Center for Tech and Civic Life, which reportedly received large financial contributions from Facebook CEO Mark Zuckerberg, may have played in the handling of absentee ballots in Wisconsin’s five biggest cities: Milwaukee, Green Bay, Madison, Racine and Kenosha.

Additionally, a Pennsylvania court Friday struck down Act 77, the 2019 law that among other changes established no-excuse mail-in voting in the state.

Commonwealth Court Judge Mary Hannah Leavitt concluded in her majority opinion that Pennsylvania’s legislature did not have the constitutional authority to change the state’s strict absentee voting requirements.

Pennsylvania’s constitution requires votes to be cast in person, unless certain requirements are met, Leavitt wrote.

Further, the Democrat-controlled Pennsylvania Supreme Court allowed drop boxes to be deployed in the Keystone State for the 2020 general election and ruled that absentee ballots did not require signature verification and could arrive up to three days after the election.

Absentee ballots played a decisive role in Democrat Joe Biden defeating then-President Donald Trump in the Keystone State. Trump’s 600,000-vote lead the morning after the election in Pennsylvania dwindled and eventually disappeared in the following days as absentee votes continued to be counted.

Kudos to those who aren’t letting the irregularities that occurred during the 2020 election go unchallenged.

And thank you Dinesh D’Souza for putting the allegations of wrongdoing on the big screen so Americans can evaluate their validity for themselves.

The film “2,000 Mules” is slated for release this spring.