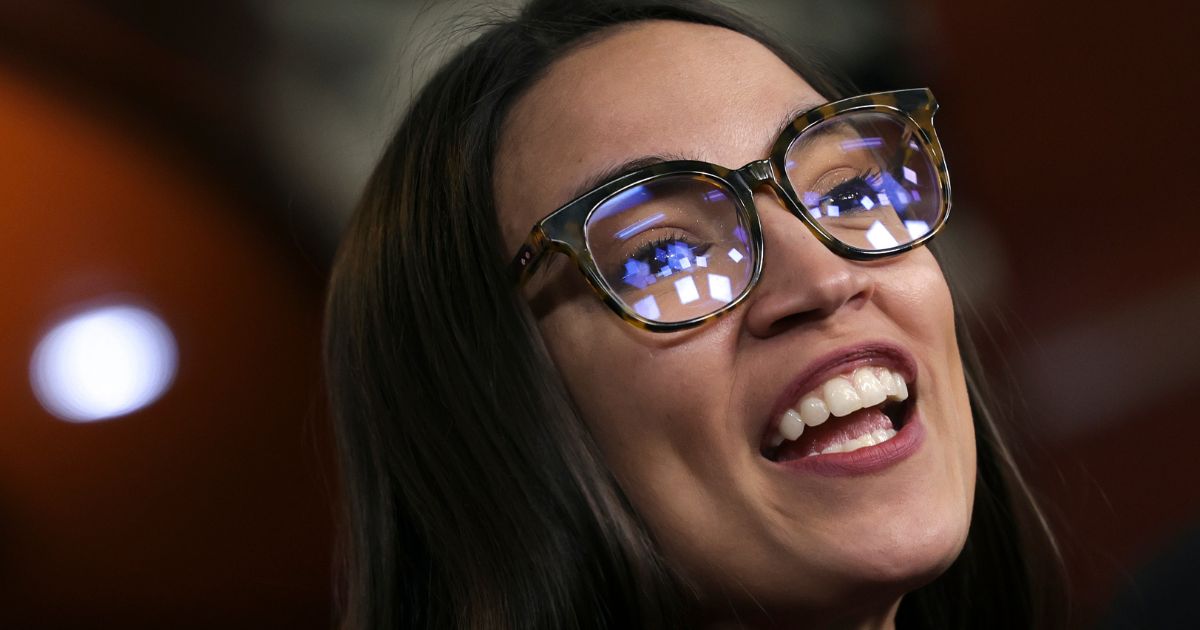 Gracing the cover of the men’s magazine GQ in October is none other than Rep. Alexandria Ocasio-Cortez. She’s having, “A conversation about masculinity, power and politics in post-Roe America,” according to the publication. Of course, Ocasio-Cortez’s appearance in a prominent men’s magazine seems about as tone-deaf as having Sen. Ted Cruz grace the cover of Cosmopolitan to discuss the troubles of being a 21st-century woman.

As Amanda Litman, co-founder of Run For Something, a Democrat non-governmental organization tweeted, “So much of this interview is about the challenges @AOC has dealt with – from the GOP, from within our party & from abundant racism & sexism. And yet! As @WesleyLowery poignantly describes it, at the core, she is (pragmatically) optimistic.”

In a few excerpts, beyond describing her history of being abused and her harrowing — if fictionally dramatized — account of the Jan. 6 Capitol incursion, the congresswoman from New York makes a few observations about abortion and her view of masculinity and what it means to be a man.

Presenting GQ’s October cover star: @AOC. The congresswoman opens up on the critical need for men to join the fight for abortion rights, whether she believes she’ll ever be president, and much more https://t.co/uwWSexYB8h pic.twitter.com/UqOnSNwZ2y

On the subject of abortion, GQ wrote, “The battle for bodily autonomy and human dignity, she said, will only be won if men themselves join in the fight.” Ocasio-Cortez then elaborated on her radical pro-infanticide stance by making a claim that would gall any man who lost a child to abortion without the right to even object.

“For almost every woman that has gotten an abortion, there’s a man who has either been affected or liberated by that abortion, too,” she told Lowery. “In this moment, it’s really only going to be the vulnerability of men, and men talking to other men, that gives us the greatest hope of shifting things the fastest, soonest.”

Ocasio-Cortez then elucidated to the GQ writer why she believes men choose to “opt-out” rather than “combat misogyny.”

Do you value AOC’s opinion on masculinity?

“I think there’s plenty of well-meaning reasons why men may feel like it’s not appropriate for them to talk about it,” she continued.

“I think sometimes the way white folks don’t like to talk about race and they say, ‘We just want to center the person who’s most impacted, so it’s not my role to do anything or take a space and speak up.’ But we know that when white folks take up space and say the right thing in rooms of other white people, that is the most shifting activity that can happen, more sometimes than any protest or any person writing a letter to the editor or anything like that. And we need men to be speaking up in that way as well. But I think men, sometimes they think, I’m not a woman. This doesn’t affect me the most.”

In a single swipe, Ocasio-Cortez, to paraphrase, accuses both white people in general and men of any race in particular, of being intellectual cowards. So essentially here’s the rhetorical trap that’s been laid here: You either agree with her, but you’re too much of a coward to speak up; you disagree, and you’re a racist/misogynist; or you agree with her whole-cloth and snap in line behind your stronger, smarter feminine leader.

But she didn’t stop there, the 32-year-old Democrat-socialist went on to point out that men “keep quiet,” as Lowery writes, “because of the burdens and antiquated expectations of masculinity.”

“Men suffer from being under patriarchy,” the congresswoman said. “They don’t go to the doctor. They suffer from much higher rates of completed suicides. Even though they report lower levels of depression, that doesn’t mean that they suffer from it less. Just a couple years ago the American Psychological Association released a very deep paper and a campaign about how these traditional cultural markers of masculinity — stoicism, competition, domination, dominance — are leading to mental health issues for men. There’s a stigma around men being vulnerable.”

“I think something that’s really powerful for men is to share their stories of growth,” she said.

GQ’s Lowery then proceeded to tee up the grand slam for AOC, “I asked her about men who may be angered by the conservative attacks on bodily autonomy and committed to personal change but carry shame about past behavior.” Again, the framing here is breathtaking. She replied that those men, too, should speak up of course.

Lowery writes, “It’s not about men posturing in public as if they are perfect, she said, rather explicitly noting that they are not.”

In a later conversation, the GQ writer would quote Ocasio-Cortez saying, “There are amazing men in this world, and not men as a final product. There are men on incredible journeys, internal journeys, journeys of transcending beyond just anger as the acceptable masculine emotion. Men who dive into their compassion, into their sadness, into their insecurity and explore it and work through it.”

So there we have it, masculinity according to Alexandria Ocasio-Cortez: “stoicism, competition, domination,” three of the hallmarks that have molded strong, loving, fathers, brothers, husbands and truly compassionate protectors for millennia. Bad. “Men who dive into their compassion, into their sadness, into their insecurity,” the latter two of which are commonly held signs of weakened or broken men. Good.

You might have paused on “domination” being positive, but hold that thought for a second.

Let’s break this down in order, stoicism first. Zeno of Citium, arguably the founder of stoicism as a philosophical movement, is credited with the phrases: “Man conquers the world by conquering himself,” and “All the good are friends of one another.” Merriam-Webster defines stoicism as “indifference to pleasure or pain.” It is essentially a belief that values abstention from material or physical pleasures in favor of the greater good — the good of the family, of the village, of the nation over the self.

Competition is “the effort of two or more parties acting independently to secure the business of a third party by offering the most favorable terms,” by definition, or “a contest between rivals” the means by which conflicting interests have been decided through strength, cunning, preparation or even luck ranging from the peaceful transaction of business to the battlefield. It is both beautiful and terrible, glorious and tragic. Competition is morally innocuous and is fundamental to the natural order, thus impossible and indeed undesirable to escape.

Finally, domination. AOC duplicates this by also referring to “dominance.” This is clearly cast as a pure negative, and domination certainly has a harsh sound to it. But let’s take this logically. Domination is, “supremacy or preeminence over another, exercise of mastery or ruling power or exercise of preponderant, governing or controlling influence.” It’s ultimately about governance, about control. The root word dominion is literally defined as “supreme authority” or “absolute ownership.”

But this is a limiting definition of masculinity that only establishes the gentlewoman from New York’s utter incapacity to speak with any authority on matters of masculinity. She makes no mention of fatherly love, brotherly love or the love of a husband.

Not a word is given to courage, self-sacrifice or willing self-deprivation. She doesn’t speak at all of the quiet dignity of a grandfather who watches his grandchildren playing in the halls that he built or beneath the trees he planted, knowing that he would not be the one to enjoy their shade.

With all due respect to the 32-year-old Congresswoman from the State of New York, Ms. Alexandria Ocasio-Cortez, she is no more equipped to lecture the nation on what it means to be masculine than any man is equipped to so describe the meaning of feminine. Perhaps instead she should take a page from Matt Walsh’s recent documentary and ask, “What is a man?” She may learn something from the exercise.