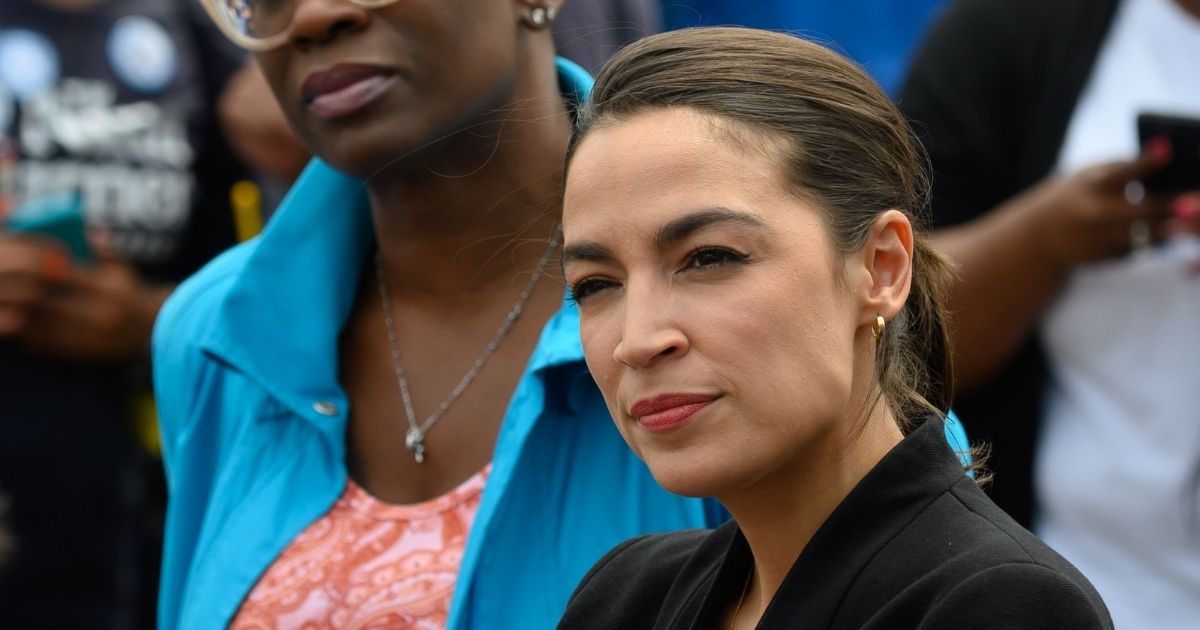 Rep. Alexandria Ocasio-Cortez might have thought she had a final slam dunk for conservatives to close out the year — instead she got slammed and dunked herself.

On the national stage since 2018, the New York Democrat has established a well-deserved reputation for a combination of narcissism, arrogance and self-righteousness that sets conservative teeth on edge and keeps her mainstream media sycophants salivating.

But when she claimed on Saturday that her political opponents are motivated by “sexual frustration,” she took things to a whole new level — and the scorn poured in.

Ocasio-Cortez — better known by the rock-star initialism AOC — was responding to reactions to a story broken by National Review that reported that she was spending the New Year holiday in Miami Beach with her longtime beau, Riley Roberts, enjoying the freedoms offered by Florida in the face of the COVID-19 pandemic.

Another kind of politician might have acknowledged the hypocrisy of being from a political party and political movement that has crucified Florida Gov. Ron DeSantis and the Sunshine State’s realistic approach to dealing with the coronavirus — pretty much the opposite of the vaccination-obsessed, mask-fetishizing approach of her native New York City and the Empire State.

But humility isn’t how AOC rolls. So, naturally, the criticism sparked by the story had to be due solely to … Republican “sexual frustration” due to GOP  members not being able to enjoy the congresswoman’s physical favors. She took particular issue with a Twitter post by Steve Cortez, a commentator and former adviser to former President Donald Trump, who commented rudely on Roberts’ footwear.

“If Republicans are mad they can’t date me they can just say that instead of projecting their sexual frustrations onto my boyfriend’s feet,” Ocasio-Cortez wrote on Twitter.

If Republicans are mad they can’t date me they can just say that instead of projecting their sexual frustrations onto my boyfriend’s feet.

That kind of message from a federal lawmaker should disturb any American, regardless of politics, considering it sounds like the pouting of a particularly spoiled high school diva more than a duly elected member of the legislative branch of government.

AOC herself might have realized how the message came off, because she followed it up with a tweet apparently aimed at broadening the circle of oppression beyond her own undeniably photogenic person to “woman, &LGBT+ people in general.”

Putting aside the fact that that didn’t make a whole lot of sense, the damage had already been done. AOC had declared that her political opponents are just venting their feelings of being unable to consummate an irresistible desire for the belle of the Bronx.

It being the leftist cesspool of Twitter, AOC had plenty of supporters, of course. But conservatives weren’t buying it — very much including conservative women.

“You just want to have sex me” is potentially the filthiest, most immature response I’ve ever heard uttered from an elected official that is facing critique.
She’s quite literally creating a Republican sexual fantasy about herself. #AocMeltdown https://t.co/u3AGcomtJh

This woman needs therapy, not a seat in Congress. What a pathetic attempt to use sex to deflect from your COVID hypocrisy. No, @AOC, Republican men are not interested in you. They know that dating or marrying a Communist is a recipe for misery. https://t.co/CvUkGntmrs

People: Kind of weird that while NY kids are being forced to eat their lunches in 30 degree weather “bc of COVID,” AOC is vacationing in free FL, the state Dems have criticized the most

AOC: What I’m hearing you say is that you’re upset you can’t have sex with me https://t.co/PMtsiwHz1c

Remember when AOC had someone really sharp tweeting for her and that person was king/queen of the clapback? She…should rehire them. https://t.co/n5bvfs1mGr

And then there were the ones like these — trying to communicate with AOC in the kind of language she really understands: The beauty contest school of political competition.

Love the child like response like you would expect from a high school mean girl “they just hate me bcz I’m sooo hot”. Ya your cute but so many things tarnish the looks and quite honestly there are millions of cute 30 somethings out that don’t come with the baggage.

I know this may be hard for you to hear, but the conservative side of the aisle has many more and much hotter women, in general.

Political philosophy isn’t about physical attraction, it’s about the power of ideas and their results. And the power of the ideas that created the United States — individual liberty to find success or failure, equality under the law respect for private property rights — are undeniable, because of their results.

They haven’t been perfectly implemented, of course — no endeavor by humans will ever be perfect. But they’ve resulted in the richest, freest and most powerful nation the world has ever seen.

Do you think Ocasio-Cortez actually believes what she’s claiming?

The socialist, collective ideas espoused by Ocasio-Cortez and her ilk, meanwhile, have resulted in pretty much the exact opposite: poverty, the grinding subjection of the individual to the power of the state and the deaths, over and over again, of countless millions of human beings. (Leftists don’t like admitting that regimes that count their victims in the tens of millions — Stalin’s Soviet Union, Hitler’s National Socialist Germany, Mao’s Communist China — all have a totalitarian ideology in common. Guess which side of the aisle it’s on.)

In her short time in the public eye, Ocasio-Cortez has been wrong about many things, but it’s tough to get anything more wrong than she got this.

The congresswoman’s relative physical charms are not the issue. When it comes to conservatives and when it comes to what matters, it’s not desire that AOC arouses. It’s disgust.