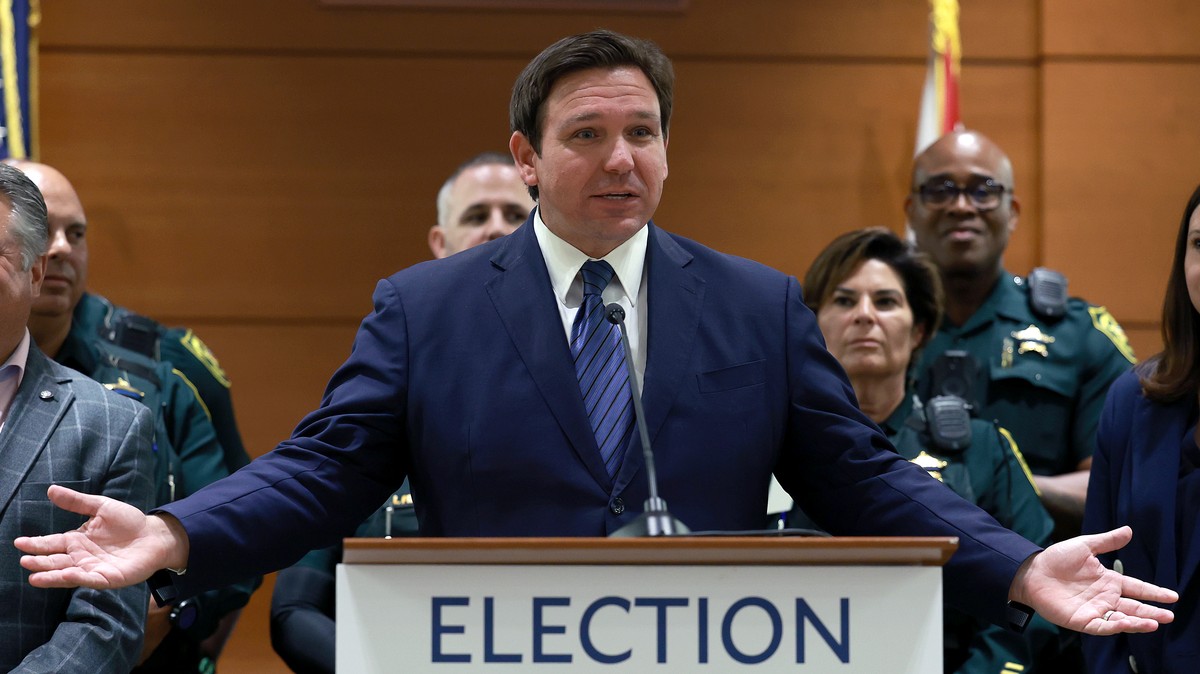 Florida Republican Gov. Ron DeSantis made a big show of announcing the arrests of 20 people accused of illegally voting in the 2020 election Thursday evening—and revealed what his new political scapegoat will be as he looks for a big reelection win in November and ramps up for a possible presidential run.

These are the first arrests made by DeSantis’ new Florida Office of Election Crimes and Security, created after the 2020 election. Florida allows former felons to vote, but the law is confusing—and those convicted of murder or a felony sexual offense don’t qualify. DeSantis said all the arrested individuals fell into that category. They now face felony charges and could serve up to five years in prison.

The splashy press conference (not to mention the creation of the office in the first place) was classic DeSantis. He excels at punching down, finding convenient political targets, and “triggering the libs” in a way that will keep the fight in the news and the political donations coming. A prime example was his “Don’t Say Gay” law, which targeted trans kids and their supporters by banning any mention of gender identity or sexual orientation in young classrooms.

Now, DeSantis is scoring easy political points with a GOP base that’s paranoid about voter fraud as he looks to further build his national brand. And what could be an easier political target for DeSantis than murderers and those convicted of sexual assault?

DeSantis’ venue to announce the arrests was also a calculated choice: Democratic and heavily diverse Broward County, in South Florida. And he made clear more arrests will be coming. “This is just the opening salvo,” DeSantis said.

DeSantis and Republicans have repeatedly sought to undermine the will of the people since Floridians overwhelmingly backed a referendum to reinstate that right for former felons in 2018. The state Legislature also undercut the referendum by banning former felons who still owed fees to the state from voting.

Voting rights advocates worry these efforts could scare off former felons who are allowed to vote legitimately.

And even though DeSantis has called Florida’s election the “gold standard” in 2020, he and Republicans in the state moved to make it harder to vote in future elections. They’ve limited ballot drop boxes and targeted so-called “ballot harvesting” to make it a felony for anyone to possess more than two ballots, which voting rights advocates say undoes long-held efforts in Black churches to gather ballots from parishioners.

DeSantis announced the recent arrests less than a week before Florida’s primary election, which will determine whether he faces Democratic Rep. Charlie Crist or Florida Agriculture Commissioner Nikki Fried this fall.

And his presidential aspirations couldn’t be clearer. DeSantis’ press conference was sandwiched between campaign events for statewide candidates in Arizona, Ohio, and Pennsylvania scheduled for this week—an obvious way for him to get national exposure as well as earn political favors from GOP candidates who might soon hold significant positions of power and influence in their states.

He also just so happens to be campaigning for four candidates who were endorsed by former President Donald Trump, giving him a foothold for potential endorsements in the future from hardline conservatives who owe something to his most likely 2024 primary rival.

His latest political stunt shows she might be right.