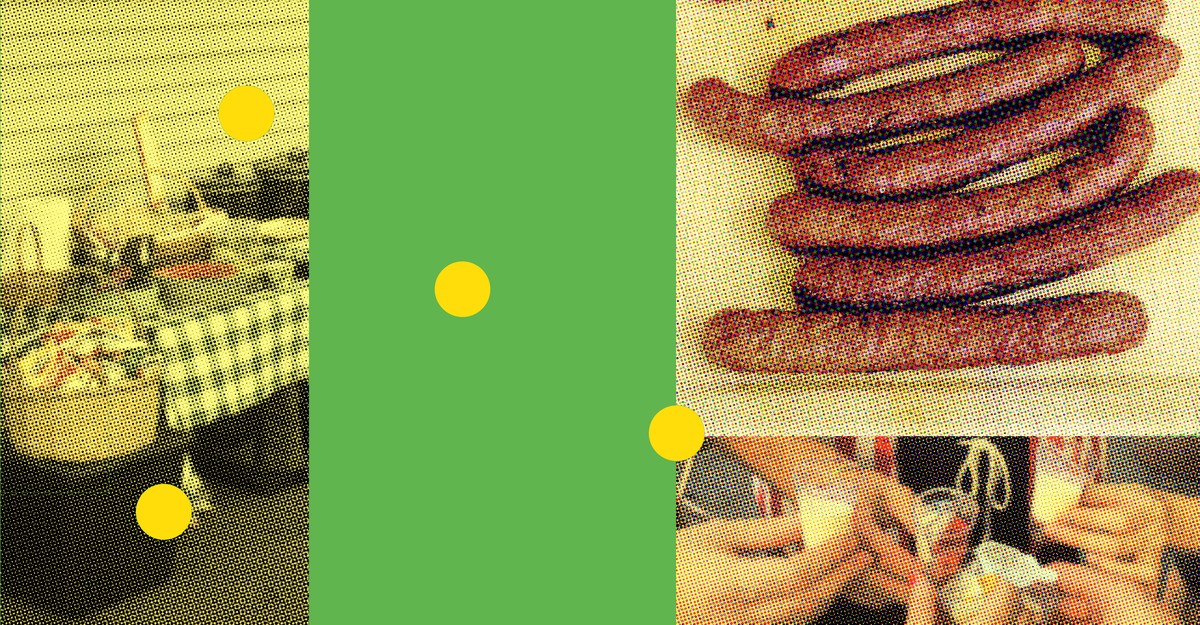 Lizzie: Despite what you may have heard, I’m not so eager to attend a party that I’ll accept any commute in order to do it. For example, if the journey to your party location involves wading through some kind of mosquito marsh in August or walking over one of those rickety swinging bridges made out of two slats of wood, I’ll probably pass. But some parties are worth the commitment it takes to get there—you just never know which ones until you’ve already arrived.

So you have to make some calculations, as was the case last weekend when my friend Colin invited us to his Summer Sausage Slam in Harrison, New Jersey, which would involve a weekend PATH ride. As someone who grew up in Hudson County, I’ve spent close to the majority of my life on the PATH, but it’s not always my first choice for a Saturday activity.

Luckily, Kaitlyn is a committed train buff with a unique interest in the northeastern part of the Garden State, so when I asked her if she wanted to go, she agreed almost immediately, saying, “I want to see New Jersey so bad!!!”

Kaitlyn: Honestly, that was me trying to hide my enthusiasm.

For years, I have been begging to learn something of Lizzie’s childhood and adolescence. Though she has ridden in my parents’ car and gotten a stick-and-poke tattoo from my sister and eaten ice cream across from my high-school crush’s house, and though I am an open book and hide nothing from her, and though at one time I even pressured her to do “The 36 Questions That Lead to Love” in a hot tub with me and Ashley so that I could reveal even more of myself than it had already occurred to me to reveal, I know much less than I would like to about the environment that made Lizzie into who she is today. And not for lack of trying. In early 2019, I even went so far as to sign up for a devastating three-hour Sopranos bus tour with someone who had theatrically dumped me just two weeks prior. I did this not only because I was experiencing, as you might guess, heartbreak-induced psychosis, but also because I was aware that several of the tour stops would be in Lizzie’s hometown.

Go ahead and picture it: I’m fragile and freezing, wiping snot on a puffy coat, staring at a piece of sidewalk where Christopher Moltisanti once took a bunch of newspapers out of a newspaper box … Young Lizzie was here. My ex-boyfriend is like, “Do you want me to take your photo?” (No.)

Moving on (and I have!). The barbecue invitation that Lizzie texted me was a work of art. On a blazing grill, Colin’s face smiled up from a crisping-sausage body. His cat’s face was part of a bell pepper and was not smiling. Seconds after I texted Lizzie back, I got down to barbecue business and Googled Martha Stewart pie recipe.

Lizzie: I asked Colin if he wanted me to bring anything and he said, “Only if you find something weird.”

The plan was for Kaitlyn and Nathan to meet at my apartment so we could take our various trains together and I could dish out travel tips along the way, like, “You can use your MetroCard for the PATH as long as you have money, not time, on it, and remember, the turnstile is an insert, not a swipe.” Whenever I take someone new on the PATH I always hope it doesn’t do anything to disappoint me, like make us wait more than 10 minutes on the platform or stop and loiter too long at Journal Square.

Our ride was mostly uneventful and the classic Journal Square pause gave us plenty of time to talk about the concept of being Final Destination-ed.

Kaitlyn: I loved being walked through the Fulton Street subway complex and then the horrible alien-rib-cage mall that is attached to it. Lizzie led the way and pointed out the sights, such as a bunch of tourists who were confused by the MetroCard vending machines and a dim corner where there is sometimes a guy selling Krispy Kreme doughnuts.

I was surprised to learn that the PATH looks basically exactly like the subway, if a bit cleaner. I don’t remember how we got on the topic of Final Destination during the 30-minute ride. If you’re unfamiliar, Final Destination is a movie about a group of teenagers who are claimed by Death in freakish ways after initially evading Death by getting off an airplane just before it blows up. The reason it’s fun to talk about is that—unlike those teenagers, who had the control group of the rest of the airplane passengers with whom they could compare themselves—you hardly ever know whether you have recently cheated Death, meaning you can’t ever be sure whether Death is now stalking you. When I get the strange feeling that I am approaching the end of my life via an improbable accident, I like to say that I am “Final Destination-ing.”

Anyway, at this point Matt shared with the group that Lizzie has a habit of opening pairs of scissors and setting them down in unexpected places. This seemed to unlock something for him. “She also sets glasses right on the edge of the table,” he told us. I guess Lizzie felt the need to distract from the pieces that were being put together in Matt’s mind, because she suddenly pointed at Nathan, who was cradling the lemon pies I’d made, and asked me, “Does that make you want to have a baby?”

We soon arrived at our destination and Lizzie was able to further distract us by leading another walk and pointing out local landmarks, such as a QuickChek and a bar that Colin goes to sometimes.

Lizzie: Often I’ll set a glass down slightly over the edge of the table so that only 70 to 80 percent of the glass’s bottom is being supported. I have, of course, broken dozens and dozens of glasses this way. Sometimes I’ll try to set a glass down without looking where my hand is going and drop it right into the air! It’s slapstick.

Back to the barbecue: After stopping at a liquor store for some Funyuns, Bud Light Lime, and multiple varieties of cream-based premade shots from a brand called “Twisted Shotz,” we made it to Colin’s. We were greeted by everything you could want at a barbecue: a tub of leis, buckets of Airheads, coolers stocked with near-infinite beverage options, a pre-batched lemonade cocktail, chips chips chips, enough seating for a small wedding, and, of course, a meticulously curated spread of sausages—both sweet and hot Italian, chorizo, kielbasa, andouille, some kind of chicken sausage—alongside multiple kinds of pickles and mustards.

I started with a seltzer and downed half the bag of Funyuns before trying one of Michele and Jorye’s Limón y Sal Modelos, which I had been warned were “very salty.” The first sip was a little too flavorful, and the intense saltiness paired with the Funyuns made my veins throb. But, as my body is wont to do when presented with a new challenge I’ve given it, my taste buds (and veins) started to adapt.

Kaitlyn: It was a big day for artificial flavoring. Before most had even put on their sunscreen and settled in, Colin’s very beautiful sister, Amy, was tricked into picking up the biggest bottle of Smirnoff Ice I have ever seen (a cultural practice known as “icing”). She gamely kneeled on the pavement and chugged until everyone agreed she could and should stop. In our first hour at the party, I had the other half of Liz’s bag of Funyuns plus three watermelon Airheads and two Bud Light Limes. I could feel a film over my teeth by 3 o’clock. Then Colin asked if Lizzie and I would like to see a dead cicada he was keeping in a cabinet in his dining room, so we did that. Only when Colin picked it up did I realize that I had not seen a cicada before.

Back outside, I had an andouille sausage with ketchup and onions, a mini cupcake with “unicorn” frosting, several handfuls of Flamin’ Lime Turtle Chips (and of Seaweed Turtle Chips, which were not as good), plus a Modelo, a glass of lemonade, and a slice of the lemon pie. After a couple of Miami Vice novelty shots, I started asking around about Lizzie’s childhood home and how far away it was—might a girl get there on foot?

Lizzie: A girl could definitely get there on foot. I don’t know why I was being cagey about my youth—admittedly, this was a real hometown event. I’ve known Colin since first grade, and although I have no concrete memories of my childhood, I’m pretty sure he’s always been able to captivate a room, or a driveway. I laughed until I cried when Colin talked about his diabetic cat Ms. Zibby’s increasingly frantic attempts to eat anything in sight, including a tub of party nuts. I laughed until I cried again when he recounted his experience smoking a synthetic cannabinoid called “Down to Earth Climaxxx” out of a gourd 10 years ago (“I left out of the top of my head”).

Read: How to pivot on a Thursday night

Kaitlyn: Colin told us that he has to tape the freezer shut or Zibs will get in there and get into the English muffins! I had never even heard of a cat doing anything like that.

Because of my sheltered childhood, I was also unfamiliar with the concept of “robo-tripping,” which Colin courteously explained at length. He even told me about a Robitussin cocktail called a “Tussi Temple” that, I have to say, it seemed like he made up on the spot. I can’t list them here, but he shared many things that made Lizzie say “Colin!” at a higher pitch than her usual speaking voice. He kept surprising and horrifying her, and in the process delighting her, which was thrilling to watch because she is normally cool as a cucumber. This was the highlight of the party because it felt like a real glimpse into Lizzie’s early life. It was a successful afternoon for me!

After another round of novelty shots—these ones labeled “Buttery Nipple”—I asked for a piece of kielbasa out of a pile that someone was carrying around in his bare hand, which is as good a sign as any that it’s time to head back to the train.

Lizzie: After Kait and Nathan left, it was more of the same, except darker outside. People started tossing around a watermelon and Colin tried to crush it with his thighs before giving in and using a knife. We ate watermelon and even more sausages and drank salty Modelos into the night, until everyone’s stomach hurt and it was time to go.

Kaitlyn: When we got back to Brooklyn, Lizzie texted to ask how the PATH had treated us on the ride home. I told her everything went fine. Actually, my impractical sandal had slid wildly out from under my foot, leading me to trip. I just barely avoided falling down the stairs of the train platform … to my death? The rest of the way back to our apartment, I walked in the most careful way I knew how, which was by stomping.

I could not shut up. I flung my arms out in front of me while I told Nathan: “Final Destination is a movie about the hubris of youth!”