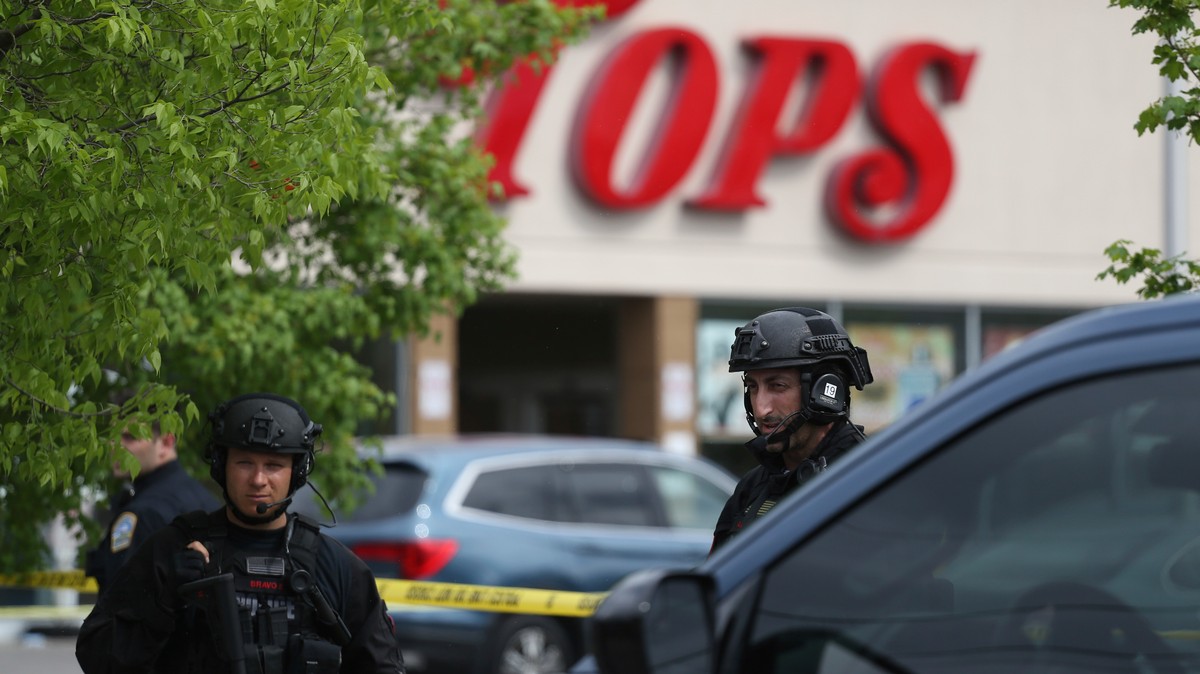 At least 10 people were killed in a mass shooting in a Buffalo, New York grocery store Saturday in an attack that authorities called racially motivated.

The suspect, who was dressed in military-style tactical gear and a helmet, has been arrested, officials said.

The suspect is an 18-year-old white male and a total of 13 people were shot, including three with non-life threatening injuries, Buffalo Police Commissioner Joseph Gramaglia told reporters on Saturday. The shooting took place at a grocery store located in a predominantly black neighborhood, and 11 of the victims are black.

“This was pure evil,” Erie County sheriff John Garcia told a press conference Saturday. “It was straight up racially motivated hate crime from somebody outside of our community.”

The mass shooting has garnered the attention of the FBI.

“The FBI is assisting in this investigation and has no other information to provide at this time,” a spokesperson for the bureau told VICE News.

The gunman live-streamed the attack, Gramaglia said, and fragments of video clips that had apparently been live-streamed on Twitch appeared on social media after the event.

The suspect drove from a location hours away to the Tops Friendly Supermarket and initially shot four people in the parking lot, Gramaglia said, killing three, with one victim who initally survived their wounds from the attack.

He then entered the supermarket and began “engaging customers inside the store,” Gramaglia said. A former Buffalo police department officer working as a security officer in the store shot the suspect, but the bullet was absorbed by his heavily-plated armor, and the suspect shot and killed the security guard, Gramaglia said.

Bystanders gather under an umbrella as rain rolls in after a shooting at a supermarket on Saturday, May 14, 2022, in Buffalo, N.Y. Officials said the gunman entered the supermarket with a rifle and opened fire. Investigators believe the man may have been livestreaming the shooting and were looking into whether he had posted a manifesto online. (AP Photo/Joshua Bessex)

The suspect also allegedly wrote a manifesto which has been circulating online and was obtained by VICE News.

Opening the nearly two-hundred page document is an image of a sonnenrad or sunwheel: known popularly as the “Black Sun” it was a symbol of the Third Reich later popularized by neo-Nazi terror groups, the Christchurch shooter, and is now a shorthand signifier for violent white nationalism in online far-right circles.

The screed makes persistent reference to a perceieved “white genocide” and rails against a surge of illegal immigration in the U.S., and nods to a global conspiracy holding that a cabal of Jewish businessmen run world governments. The gunman makes clear that he was inpsired by the terrorist who gunned down fifty people at a mosque in New Zealand in 2019, who was himself inspired by other white nationalist terrorists from Canada and Norway.

“The manifesto is interesting for several reasons,” said Amarnath Amarasingam an assistant professor of religion at Queen’s University in Canada and a far-right terrorism expert. “For one, it is dripping with Great Replacement conspiracy theories, about a coming demographic collapse of white Europeans.”

“It copies the Christchurch shooter’s question and answer style as well as the Halle synagogue shooter’s style of providing in depth instructions on how to plan another attack.”

Amarasingam, who along with another source familiar with the neo-Nazi underground confirmed the authenticity of the manifesto, said the most troubling aspect of it was that it shows “these attackers are learning from each other and attempting to emulate each others’ killing sprees. It’s deeply worrisome.”

“It’s like walking onto a horror movie, but everything is real. It is Armageddon-like,” a police officer at the scene told The Buffalo News.   “It is so overwhelming.”