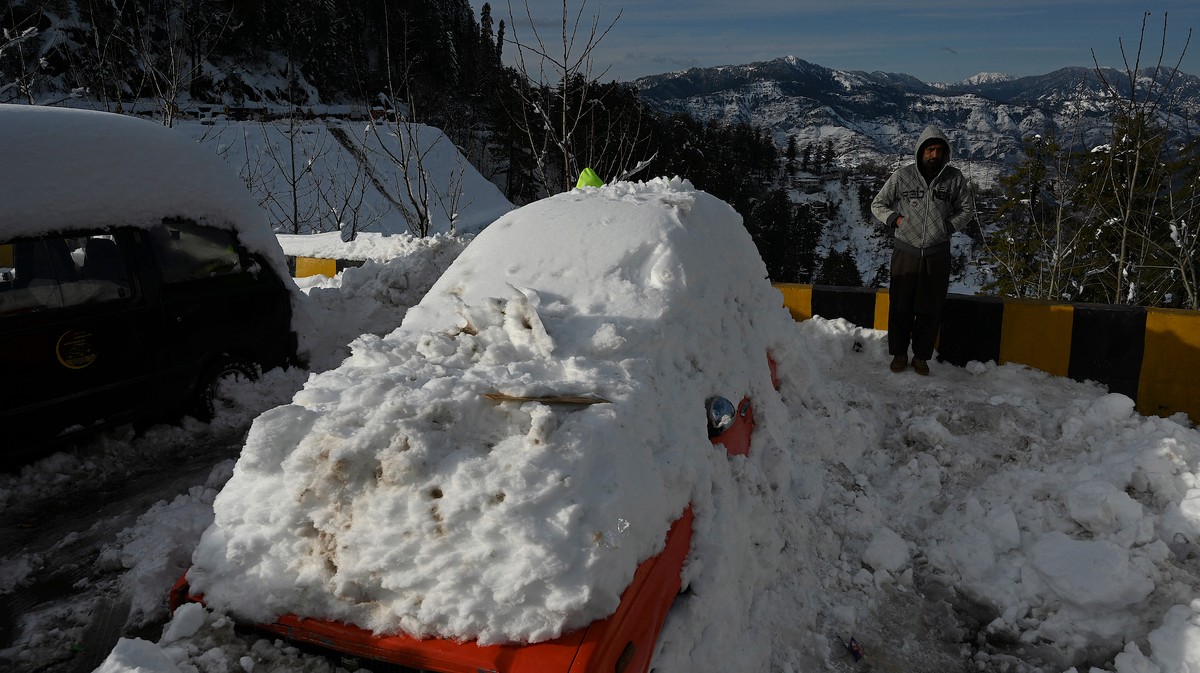 A man stands next to a snow-covered car stuck on a road 24 miles northeast of Islamabad. A blizzard in the Pakistan hill town of Murree led to 22 tourists dying after they got trapped by heavy snow inside their cars. PHOTO: Aamir QURESHI / AFP

The Pakistani government has come under fire for “victim blaming” and negligence after 22 tourists trapped in their cars during a blizzard died in the popular Pakistani tourist destination and hill town of Murree on January 8.

The dead included 10 children, a police officer and seven members of his family. Some of them froze to death while the others died from carbon monoxide poisoning, authorities said.

Videos that circulated on social media over the weekend showed people stranded in cars covered in snow on winding roads in the hill town about 24 miles from the capital Islamabad.

In one of his last phone calls, the ill-fated police officer Naveed Iqbal can be heard saying: “There are children in all the cars trapped here. They are crying. There hasn’t been any food or water since morning, the children are in a poor condition.”

Some people have blamed the tourist town’s authorities for the incident. “It was my worst experience. The management of this area, they are responsible for all of us,” Aafia Ali, a tourist from Karachi, told Dawn News.

In the past few days, despite severe weather warnings issued by the Pakistan Meteorological Department, more than 100,000 cars were allowed to pass through highway toll plazas to enter Murree in Punjab province.

Three days before the incident, Information Minister Fawad Chaudhry had praised the number of tourists rushing into the hill station in a tweet, claiming that the increase in tourism was a testament to the economic prosperity of the “common man.”

Officials, meanwhile, blamed the disaster on the large numbers of tourists. In a tweet, Prime Minister Imran Khan wrote: “Shocked and upset at tragic deaths of tourists on road to Murree. Unprecedented snowfall and rush of people proceeding without checking weather conditions caught the district admin unprepared. Have ordered inquiry and putting in place strong regulation to ensure prevention of such tragedies.”

Interior Minister Sheikh Rashid said that the tragedy had occured due to the large number of tourists entering the town.

The government’s response has been heavily condemned by opposition leaders, journalists and social media users. They have accused the state of “victim blaming” and of shirking responsibility for their lapses in tourist regulation and disaster management in the colonial-era town.

Critics said the government heavily promoted tourism but proved ill-equipped to handle the influx of families keen to see snow, and was underprepared to deal with an emergency.

“This was a criminal act of negligence and inefficiency, and cannot be pardoned. When the Met Office had warned of excessive snowfall, what measures did the government take?,” opposition politician Shehbaz Sharif said in a national assembly meeting. “They said that the administration was not prepared. If that was the case, then what are you there for? Resign and go home.”

The aftermath of the blizzard which left Murree, a hill town first established by British colonists in the 1853, covered in snow. Photo: Aamir QURESHI / AFP

Members of opposition parties have called for the formation of an independent judicial inquiry into the events preceding the deaths.

On January 9, Punjab Chief Minister Usman Buzdar announced the creation of a five-member committee to probe into the lapses that led to the tragedy. According to a statement by provincial government spokesperson Azhar Mashwani, the committee will “complete the inquiry and determine responsibility [within] seven days.”

The committee is set to investigate whether adequate traffic flow measures were in place and if weather warnings were sufficiently disseminated. The provincial chief minister also announced plans to grant Murree district status to ensure improved administration, and for the establishment of two police stations and two new parking plazas in the heart of the town.

A preliminary investigation report submitted to the provincial government revealed that roads within and surrounding the hill station had not been repaired for the past two years.

A day after the tragic deaths, army rescuers cleared routes around Murree, finally ending the ordeal. Thousands of stranded tourists had been given shelter by locals.

Meanwhile, some observers have accused hotels of cashing in on the disaster by heavily increasing room rent fees, which allegedly forced people to just sleep in their cars. The hashtag #BoycottMurree began trending on Twitter as a response to the allegations. Murree Hotel Association Chairman Raja Irfan rejected claims that exorbitant hotel rents led to the deaths of tourists.