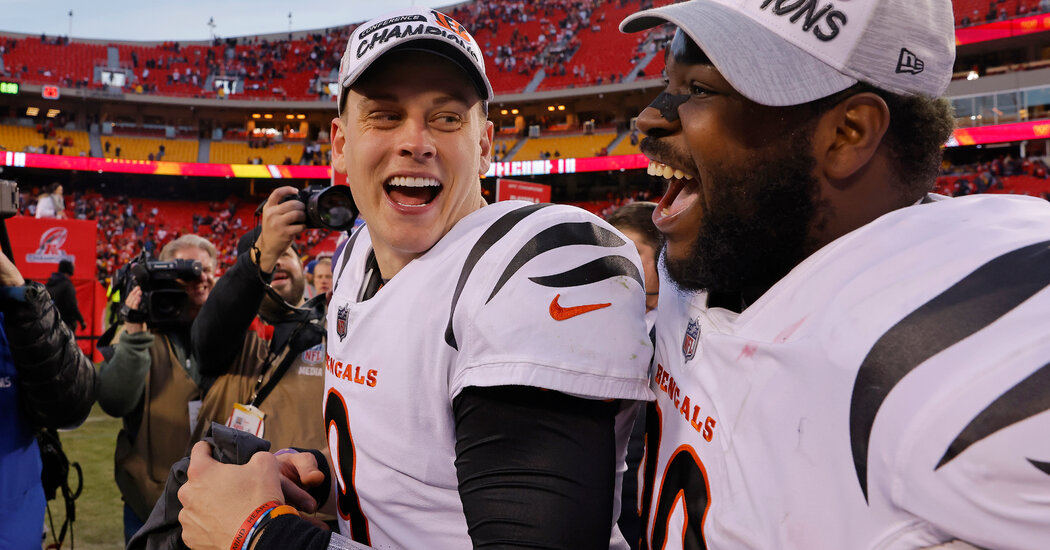 KANSAS CITY, Mo. — Over the last three decades or so, the Cincinnati Bengals have dabbled in wretched football and entertaining football, tedious football and effective football, but not until this postseason had they managed to play the brand of football they desired most.

After going 31 years between playoff victories, a stretch of futility unmatched in major professional sports, the Bengals have now triumphed three times in two weeks. Their latest, craziest conquest vanquished the reigning A.F.C. champion Kansas City in a second-half comeback that the good folks of southwestern Ohio and neighboring areas will hail for eons.

And Sunday’s final score — 27-24, in overtime, secured on Evan McPherson’s 31-yard field goal — will linger on their tongues, too, numerical confirmation that the Bengals’ new penchant for playing winning football escorted them to the Super Bowl. Not since Ickey Woods shuffled and Boomer Esiason flung lefty passes and David Fulcher prowled the secondary, in the 1988 N.F.L. season, had Cincinnati reached the final game of the season. The franchise has never won a championship.

“This is a special team that’s capable of doing special things,” Coach Zac Taylor said, “and we believed from the get-go whether people believed in us or not.”

The group that returned Cincinnati, seeded fourth, to the Super Bowl against the Los Angeles Rams, is led by a cigar-smoking, Cartier-sunglasses wearing, diamond pendant-bearing quarterback who feels neither pressure nor pain.

In becoming the first quarterback drafted No. 1 overall to reach a Super Bowl within his first two seasons, Joe Burrow sent Cincinnati into a certified tizzy by leading his team to 21 consecutive points, erasing a 21-3 first-half deficit. Growing up a Kansas City fan, Burrow attended high school in Athens, Ohio, about 150 miles east of Cincinnati, when the Bengals endured three of their eight consecutive playoff losses.

In overtime, he followed Patrick Mahomes’s interception on the opening possession by driving the Bengals 42 yards downfield to set up McPherson’s fourth field goal of the game, and prevented another crushing defeat.

“I knew after we got that first stop it was in Joe’s hands,” defensive end Sam Hubbard said, “and we were good.”

It was McPherson’s 12th field goal in a row these playoffs, and unlike last week, when he told the backup quarterback Brandon Allen before his game-winning kick at Tennessee that the Bengals were headed to the A.F.C. championship game, this time he kept his confidence to himself. But that ball, he said Sunday night, was absolutely sailing through the uprights.

The Bengals, after going 6-25-1 the past two seasons and finishing at the bottom of the A.F.C. North last season after Burrow tore knee ligaments in Week 11, seized on his unflappable nonchalance to rampage through the conference bracket. Afterward, he said he was more surprised that one of his favorite rappers, Kid Cudi, had contacted him — and that LeBron James, another Ohio native, had congratulated him in a Twitter post — than at Sunday’s outcome.

“That part is surreal,” Burrow said. “The football part, not so much.”

Burrow spoke about an hour after dealing Mahomes his first playoff loss to a team quarterbacked by someone other than Tom Brady. He wore all black and, oh yes, that pendant.

“They’re definitely real,” Burrow said, smiling, of the gemstones that spelled JB9 on his chest. “I make too much money to have fake ones, so these are real.”

And so was everything else that transpired over 3 hours and 14 minutes of unadulterated mayhem. Kansas City’s three touchdowns in three drives to start the game. The dexterous interception by the defensive tackle B.J. Hill that positioned the Bengals for the tying score late in the third quarter, Burrow’s 2-yard, back-shoulder pass to his former Louisiana State teammate Ja’Marr Chase. The throngs of Cincinnati fans, wearing Bengal-striped shawls and jerseys of heroes past and present, that congregated in the lower bowl to watch the presentation of the A.F.C. championship trophy, named for Lamar Hunt, the founder and original owner of the Kansas City franchise.

After an uneven beginning to the season, Kansas City had dropped only one game since Halloween — a 34-31 defeat to the Bengals in Cincinnati on Jan. 2 — and precedent suggested that Sunday would proffer the opposite result. Over the last three years, it had won all five rematches against teams it lost to earlier in the season, while scoring more than 39 points per game.

The most recent payback occurred at this same venue last week, when Kansas City kindled an absurd comeback — a three-play, 44-yard, 13-second field goal drive — to tie Buffalo at the end of regulation before winning the divisional-round game in overtime.

As then, Kansas City won the overtime coin toss. But instead of driving for the clinching touchdown on Sunday, Mahomes, looking downfield for Tyreek Hill, tossed an interception — his second of the game — that appeared to carom off the hands of Hill and Cincinnati’s Jessie Bates and into those of defensive back Vonn Bell.

Eleven plays later, McPherson drilled his kick long and true, denying Kansas City its third consecutive trip to the Super Bowl and sending his Bengals teammates spilling onto the field, nearly a repeat of the teams’ Week 17 meeting.

Sunday’s game unfolded as if adhering to the basic template from that game, with Mahomes flaunting his magnificent, improvisational and unstoppable version of football in the first half before the Bengals rediscovered their compass.

And just as in that earlier game, Kansas City amassed a first-half lead that it eventually ceded. On Sunday, Kansas City headed into halftime leading, 21-10, and the margin could have been — should have been? — wider if not for both a curious play call and excellent tackling by Bengals cornerback Eli Apple.

With five seconds left in the first half, no timeouts and the ball at the Cincinnati 1-yard line, Coach Andy Reid, eschewing the close field-goal attempt, tried to blowtorch the Bengals out of commission. Mahomes flipped a pass to Hill at the 5-yard line, and Apple — after committing the pass-interference penalty that gave Kansas City the ball by the goal line — preserved the 11-point deficit by standing him up.

It was the first of six consecutive defensive stops by the Bengals, who held an offense that had scored 84 points the last two weeks to just 3 after halftime.

“We’re made for this moment,” Bell said.

Last week, Burrow proclaimed his disgust with what he called the “underdog narrative” surrounding the Bengals, demanding the team be taken seriously. Already he had changed the team’s slogan, to “It Is Us” from “Why Not Us?”, and his teammates agreed.

“That’s not really the idea you want in your head when you step in the ring,” left tackle Jonah Williams said last week. “It’s not, ‘Why can’t I knock this guy out?’ It’s, ‘I’m going to knock this guy out.’ It’s a much more powerful attitude to have.”

But not this year. Once beleaguered, now the best in the A.F.C., the Bengals are going to the Super Bowl.