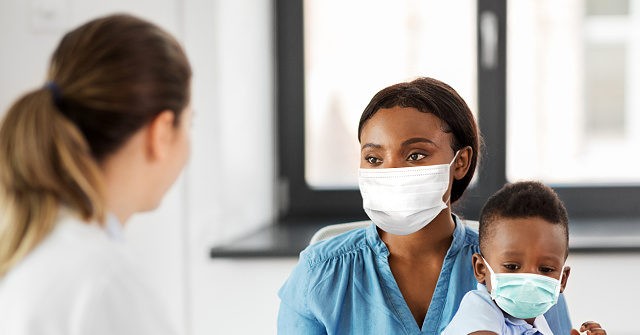 According to the Washington Free Beacon:

Effective Jan. 1, Medicare doctors can boost their reimbursement rates by conducting “a clinic-wide review” of their practice’s “commitment to anti-racism.” The plan should cover “value statements” and “clinical practice guidelines,” according to HHS, and define race as “a political and social construct, not a physiological one”—a dichotomy many doctors say will discourage genetic testing and worsen racial health disparities.

HHS justified the rule because “it is important to acknowledge systemic racism as a root cause for differences in health outcomes between socially-defined racial groups.”

This move is the latest in Biden’s embrace of critical race theory and other related ideologies. Biden launched a “whole-of-government equity agenda” to ensure “equitable delivery of government benefits” in an executive order on his first day of office.

Joe Biden replaces the mask he wears to reduce the risk posed by coronavirus after addressing union members outside the United Auto Workers Region 1 offices on September 09, 2020 in Warren, Michigan. (Photo by Chip Somodevilla/Getty Images)

The HHS rules modify Medicare’s Merit-Based Incentive Payment System, a scoring rubric determining doctors’ reimbursement rates. “Anti-racism” is now on the list of “improvement activities” that go rewarded by the payment system. In addition, the activities are either “medium” or “high-weighted,” with “anti-racism” plans falling in the latter, therefore giving doctors extra incentive to implement them.

The highest possible bonus a doctor can receive is reportedly 1.79 percent of their Medicare reimbursements.

In addition to “anti-racism” plans, doctors may boost their reimbursements by implementing “a Trauma-Informed Care Approach to Clinical Practice.” This approach must seek to “avoid re-traumatizing or triggering past trauma,” including “multi-generational trauma, whereby experiences that traumatized earlier generations, such as the genocide of Native American tribes, are passed down.”

Generational trauma has also been at the forefront of the push for reparations for black Americans. However, the New York Times said evidence for multi-generational trauma was “circumstantial at best” and it “falls well short of demonstrating that past human cruelties affect our physiology today.”