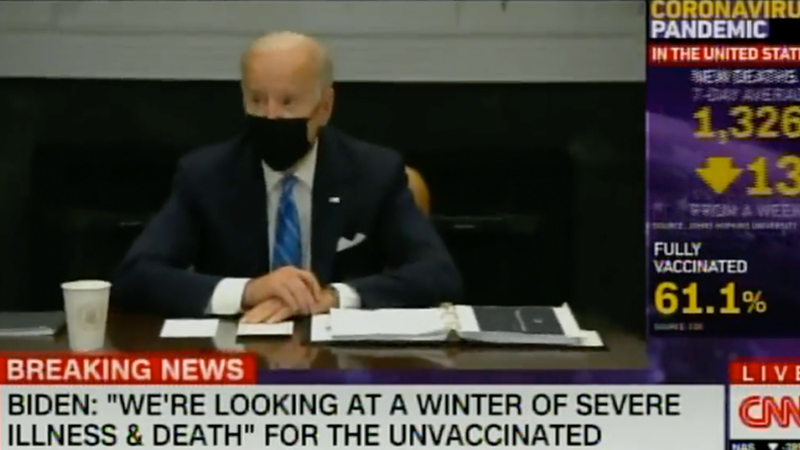 Bumbler-in-Chief Joe Biden announced a winter of death and severe illness for people refusing to get jabbed with experimental mRNA vaccines.

Meanwhile, those who received the jab will be spared, Biden proclaimed.

Biden made the remarks during a short press conference Thursday with his Covid-19 response team.

“…I want to send a direct message to the American people: Due to the steps we’ve taken, Omicron has not yet spread as fast as it would’ve otherwise done and as is happening in Europe.  But it’s here now, and it’s spreading, and it’s going to increase,” Biden claimed.

“For unvaccinated, we are looking at a winter of severe illness and death — if you’re unvaccinated — for themselves, their families, and the hospitals they’ll soon overwhelm,” he added.

“But there’s good news: If you’re vaccinated and you had your booster shot, you’re protected from severe illness and death — period.“

So much for healthy living, or natural immunity. Guess it’s also over for all those people who’ve been medically advised not to get vaccinated.

Elsewhere during the press conference, Biden bungled the number of booster jabs and had to be aided by Dr. Fauci.

“Fifty-seven -– excuse me –- five hundred and seventy –- excuse me –- I don’t want to read -– I’m not sure I got the right number,” Biden stammered. “The — the total number of boosters is what?”

“I must return to the issue of ‘top up vaccines’ (booster shots) and it is this whole narrative which I fear will he exploited and used to gain unparalleled power over us.

“PLEASE warn every person not to go near top up vaccines. There is absolutely no need to them.

“As there’s no need for them, yet they’re being made in pharma, and regulators have stood aside (no safety testing), I can only deduce they will be used for nefarious purposes.

“For example, if someone wished to harm or kill a significant proportion of the world’s population over the next few years, the systems being put in place right now will enable it.

“It’s my considered view that it is entirely possible that this will be used for massive-scale depopulation.”