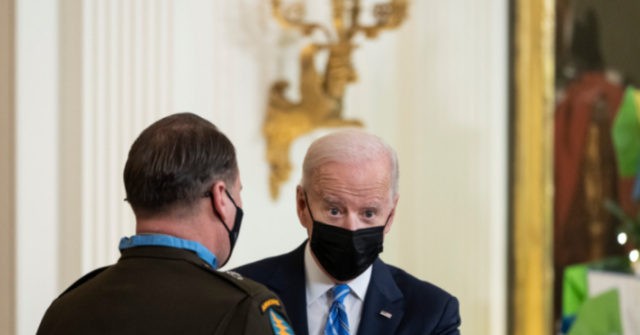 President Joe Biden repeatedly got the name of Medal of Honor recipient Alwyn Cashe wrong during a White House ceremony on Thursday.

“To the family of Sergeant First Class Alwyn Chase, this has been 16 years in coming,” Biden said, appearing to read from his teleprompter.

Later in the ceremony Biden again called Cashe, “Chase” while saying it was his “great honor” to ask for the citations to be read to honor the medal posthumously.

The president was also 37 minutes late for the ceremony.

Sgt. 1st Class Alwyn Cashe is the first the black service member to be awarded the Medal of Honor since the terrorist attacks of 9/11.

Cashe was awarded the Medal of Honor for his heroic efforts and ultimately sacrificing his life to rescue his fellow soldiers from a burning military vehicle while serving in Iraq on October 17, 2005.

During the ceremony, Biden gave the medal to Cashe’s widow, Tamera Cashe.

Biden’s verbal flub was not the only mistake in the ceremony.

As the narrator read Biden’s citation, he announced the Medal of Honor was being awarded to Master Sgt. Earl Plumlee “posthumously” even though he was standing right next to the president.