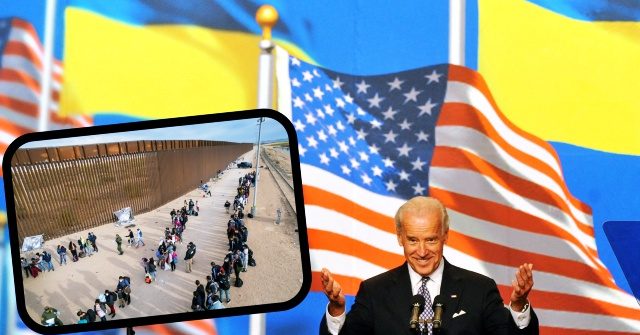 The migrants will be brought into the United States via the “parole” side door in the border that was created to help individual foreigners in emergencies.

“They don’t have the [legal] power to do it,” said Andrew Arthur, a former immigration judge who now works with the Center for Immigration Studies.

The parole side-door was created by Congress for rare and small-scale emergencies, such as when a foreign ship needs to transfer a sick crewmember to a U.S. hospital, “only on a case-by-case basis for urgent humanitarian reasons or significant public benefit.”

But Biden will likely get away with the plan unless a state Attorney General takes him to court, he added. “The biggest [political] issue is that [the Ukrainians] a sympathetic group of people … consequently, nobody’s actually going to challenge this in federal court. So the Biden administration is going to be allowed to go ahead and do what it wants.”

Biden’s Ukraine immigration program does not increase the safety of Ukrainians, he noted, because they would otherwise be able to settle in Europe. “There’s no reason to do this … The EU [European Union] has already said that the [Ukrainian refugees] can remain in the EU for up to three years,” Arthur said, adding:

I’m sympathetic, which is why I wholly support what the EU is doing to protect those people. And if the United States wants to do the most that we can for the largest number of people, [we should help the] bear the burden of the good work that they’re doing. For the money that we’re going to be spending to bring 100,000 [Ukrainians] to the United States, we could probably take care of half a million in Ukraine or in Europe.

Bringing the Ukrainians to the U.S. is also bad for Ukraine, he said:

We all hope the Ukrainian war will be over quickly and then those people are going to be needed to rebuild their country. If they come to the United States, the longer they’re here, the more roots they put down, the more likely it is that they’re never going to leave. [So] they’re not going to be there to rebuild the country, nor are they going to want to. They’ll start a new life in the United States. It might be good for these migrants, but it’s not good for Ukraine.

Meanwhile, other Ukrainians are expected to stay in Ukraine to fight Russian artillery and tanks. “I’m going to be sending to Congress a supplemental budget request to keep weapons and ammunition flowing without interruption to the brave Ukrainian fighters,” Biden said as he announced the migration program.

Ukrainian evacuees board a train en route to Warsaw at the rail station in Przemysl, near the Polish-Ukrainian border, on March 26, 2022. (ANGELOS TZORTZINIS/AFP via Getty Images)

Ordinary Americans will pay the price for Biden’s generosity to the Ukrainian migrants, Arthur said:

When they come here, they’re going to use public services, they’re going to send their kids to school. If they get sick, they’re going to go to the local emergency room. These are all costs the taxpayers have to pay, which is why we have [annual] limits on the number of foreign nationals who are allowed to come to the United States. They’re also going to be put in direct competition with American workers — both citizens and aliens — with similar skills …[and] they drive up housing prices.

On the same day that Biden announced the extraction plan, the Washington Post reported:

Rents continue to rise at the fastest pace in decades, making housing costlier than ever for many Americans. Nationally, rents rose a record 11.3 percent last year, according to real estate research firm CoStar Group. That fast pace of growth remained elevated in the first months of 2022, as many parts of the country continued to notch double-digit jumps in rent prices.

The higher rents will be paid by most young Americans, including many college-trained Americans who support immigration.

The vast majority of the economic benefits go to investors and landowners in a few coastal states where migrants prefer to live. For example, more than half of the Ukrainian-American population lives in the four states of New York, Pennsylvania, California, and New Jersey.

Most Americans want to help Ukrainian refugees, but just one-in-three say they support permanent residency for more than 50,000 refugees, according to a March poll by Rasmussen Reports.

I’m announcing a program, Unite for Ukraine, a new program to enable Ukrainians seeking refuge to come directly from Europe to the United States. This new humanitarian parole program will complement the existing legal pathways available to Ukrainians, including immigrant visas and refugee processing. It will provide an expedient channel for secure, legal migration from Europe to the United States for Ukrainians who have a U.S. sponsor such as a family or an NGO [Non-Government Organization].

This program will be fast. It will be streamlined and will show the United States honors its commitment to go to the people of Ukraine and [they] need not go through our southern border.

Agency officials identified one of the participating NGOs as Welcome.us, which was recently created by elites and billionaires to import more migrants. The NGOs will be allowed to spend charitable funds to import the Ukrainians, rent housing for them, and train them for jobs.

The group’s leadership consists of Fortune 500 CEOs and investors who gain whenever the federal government extracts more consumers, renters, and workers from poor countries.

Much of this economic policy has never been approved by Congress. For example, aides to President George W. Bush created the uncapped Optional Practical Training work-permit program for foreign graduates of U.S. colleges.

The Ukraine inflow accompanies the recent arrival of 70,000 Afghans, 40,000 Cubans, at least 10,000 Cameroonians, and roughly 1 million other migrants who crossed the southern border since January 20. These inflows are in addition to the annual inflow of roughly 1 million legal immigrants and to the resident population of roughly 1.5 million foreign white-collar contract workers. Overall, the federal government has imported 45 million foreigners who are now living legally or illegally in the United States.

To quickly pull more people out of Ukraine, U..S. officials are looking beyond the regular programs for legal immigrants and refugees. They are trying to identify groups of pitiable Ukrainians that can be quickly imported through myriad humanitarian and work visa programs. For example, CBS reported:

But the administration on Thursday also announced an effort to refer more Ukrainians to the U.S. refugee program, focusing on identifying vulnerable displaced individuals in eastern Europe, including women, children, the elderly, people with severe medical conditions and members of the LGBTQ community.

The State Department, a senior administration official said, is also working to track down 18,000 Ukrainians who had entered the U.S. refugee pipeline before the Russian invasion under the so-called Lautenberg program, which allows religious minorities in former Soviet republics to obtain expedited U.S. resettlement.

Since at least 1990, the D.C. establishment has extracted tens of millions of migrants and visa workers from poor countries to serve as legal or illegal workers, temporary workers, consumers, and renters for various U.S. investors and CEOs.

This economic strategy of Extraction Migration has no stopping point. It is brutal to ordinary Americans because it cuts their career opportunities, shrinks their salaries and wages, raises their housing costs, and has shoved at least ten million American men out of the labor force.

Migrants heading in a caravan to the US, walk towards Mexico City to request asylum and refugee status in Huixtla, Chiapas State, Mexico, on October 27, 2021.(Isaac Guzman/AFP via Getty Images)

Extraction migration also distorts the economy and curbs Americans’ productivity, partly because it allows employers to use stoop labor instead of machines. Migration also reduces voters’ political clout, undermines employees’ workplace rights, and widens the regional wealth gaps between the Democrats’ coastal states and the Republicans’ Heartland and southern states.

The policy is hidden behind a wide variety of excuses and explanations, such as the claim that the U.S. is a “Nation of Immigrants” or that Americans have a duty to accept foreign refugees. But the economic strategy also kills many migrants, exploits poor people, splits foreign families, and extracts wealth from the poor home countries.

Immigrant families from Haiti walk from Mexico through a gap in the border wall into the United States on December 10, 2021, in Yuma, Arizona. (Photo by John Moore/Getty Images)

The economic policy is backed by progressives who wish to transform the U.S. from a society governed by European-origin civic culture into a progressive-led empire of competing identity groups. “We’re trying to become the first multiracial, multi-ethnic superpower in the world,” Rep. Rohit Khanna (D-CA), told the New York Times on March 21. “It will be an extraordinary achievement … we will ultimately triumph,” he insisted.

Not surprisingly, the wealth-shifting extraction migration policy is very unpopular, according to a wide variety of polls. The polls show deep and broad public opposition to labor migration and the inflow of temporary contract workers into jobs sought by young U.S. graduates.

The opposition is growing, anti-establishment, multiracial, cross-sex, non-racist, class-based, bipartisan, rational, persistent, and recognizes the solidarity that Americans owe to one another.