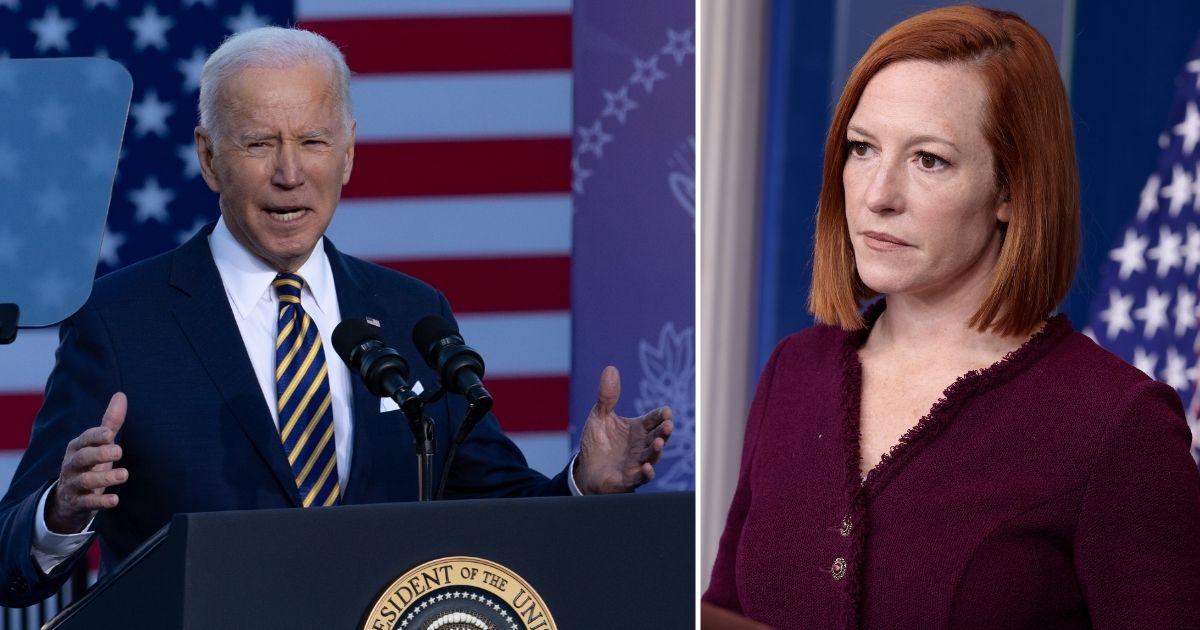 On Tuesday, President Joe Biden made a demagogic appeal to get Democrats’ voting overhaul legislation through the Senate by invoking the nuclear option and doing away with the 60-vote threshold required by the filibuster.

In it, he drew an explicit comparison between senators who refused to do away with the filibuster and infamous segregationists from the Jim Crow-era South.

In a media briefing, Psaki claimed Biden “was not comparing them as humans, he was comparing the choice to those figures in history” and where they stood on the “the fundamental right to vote.”

(Biden very much was comparing them as humans, of course, and that wasn’t the only demagogic claim he and other Democrats have made to try to get their federal voting overhaul passed. We’ve been bringing America the truth about the left’s shameful tactics here at The Western Journal. You can help us continue equipping readers with the facts by subscribing.)

There were problematic moments aplenty during Biden’s Tuesday speech, but the one that garnered the most attention was his comparison of filibuster proponents to segregationists and figures from the Confederacy.

“Here’s one thing every senator and every American should remember: History has never been kind to those who have sided with voter suppression over voters’ rights. And it will be even less kind for those who side with election subversion,” Biden said.

“So, I ask every elected official in America: How do you want to be remembered?

Joe Biden said during this speech that people who disagree with his bill to federalize elections are “domestic enemies” and are on the side of George Wallace, Bull Connor, and Jefferson Davis.

What you see here is truly the soul of nation being restored. pic.twitter.com/P2gZi5K0nS

By Friday, the White House had every reason to back off this rhetoric. First and foremost, it had failed to move the two Democratic senators it needed to get the 50 votes necessary to eliminate the filibuster — Joe Manchin of West Virginia and Kyrsten Sinema of Arizona. (Sinema, in particular, spoke for almost 20 minutes on the Senate floor in defense of maintaining the 60-vote threshold.)

Senate Republicans blasted the rhetoric — including Utah Sen. Mitt Romney, of all people, who likened Biden to former President Donald Trump for “casting doubt on the reliability of American elections.” Even Democrats said Tuesday’s rhetoric had gone too far.

“Perhaps the president went a little too far in his rhetoric,” said Majority Whip Dick Durbin of Illinois, while still arguing “there are parallels there.”

“Perhaps the President went a little too far in his rhetoric… But the fundamental principles and values at stake are very, very similar,” Sen. Dick Durbin says about Biden’s remarks on voting rights in which he referenced Jefferson Davis and Bull Connor. https://t.co/PQIos3OHA0 pic.twitter.com/UBwrSjFQwt

One America News Dropped from Direct TV in Shock Decision

Psaki was called upon to do the backpedaling. She’s supposed to be the pro at this, after all. Which is telling, because her response could be summed up with, “C’mon, people — he didn’t mean it personally.”

Psaki was asked by Fox News White House correspondent Peter Doocy, “What happened to the guy who, when he was elected, said, ‘To make progress, we must stop treating our opponents as our enemies’?”

“I think everybody listening to that speech who’s speaking on the level, as my mother would say, would note that he was not comparing them as humans,” Psaki responded.

“He was comparing the choice to those figures in history and where they’re going to position themselves as they determine whether they’re going to support the fundamental right to vote or not.”

Do you support maintaining the filibuster?

Psaki, let’s note, had three days to come up with this excuse. I’ve written term papers in less time. The best she came up with is that, if you listened to Biden’s speech “on the level,” he wasn’t actually comparing those senators to segregationists.

Except he literally was. Filibuster side: George Wallace, Bull Connor, Jeff Davis. Nuclear option side: Dr. Martin Luther King Jr., John Lewis, Abraham Lincoln. If you’re on someone’s “side,” it’s safe to say you’re signing on to their views. The comparison couldn’t be much clearer.

Biden was literally comparing his opponents to figures who weren’t just enemies of democracy but who opposed it out of unregenerate racism.

George Wallace was a four-term governor of Alabama who declared during his first inaugural address in 1963 that he was for “segregation now, segregation tomorrow, segregation forever.” Until his final years in politics, he did everything in his power to see that happen.

Jefferson Davis, of course, was president of the Confederate States of America, which sought to form a country in order to, inter alia, preserve slavery.

The individuals defending the filibuster are doing so because they don’t believe two voting overhaul bills, both aimed not so much at “voting rights” as tipping the electoral scales toward Democrats, are worth permanently eroding the norms of Congress’ upper chamber for.

Any comparison to those historical figures isn’t just hyperbole — it’s poisoning the well of American politics, particularly coming from a president who so oft talks about unity and healing.

Offense was taken, and rightly so.