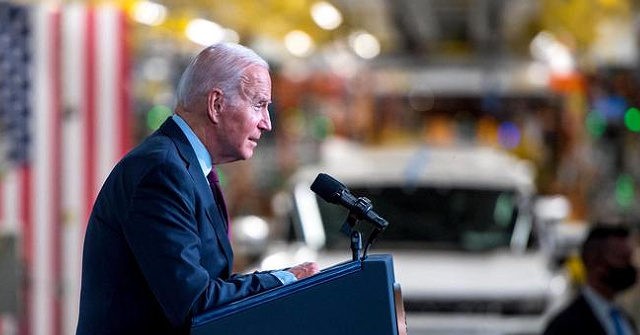 President Joe Biden test drove the all-new electric Hummer during his visit to a General Motors (GM) factory in Michigan on Wednesday, promoting the future of electric vehicles in the United States.

“This sucker is something else,” Biden said after he pulled up to the group of reporters who watched him drive the new electric vehicle.

President Biden floored it behind the wheel of an electric Hummer today in Michigan. pic.twitter.com/BOQpqiBlhE

The president drove around with GM CEO Mary Barra in the passenger seat, at one point revving the engine and squealing the tires.

President Biden drives electric Hummer @GM: “Anybody want to jump in the back? On the roof? This sucker’s something else.” pic.twitter.com/3WbEwArRJW

Biden said he did not know how fast he got the vehicle up to, claiming he did not have time to look at the speedometer.

Cheaper models of the electric vehicle will be put on the market next year, and the cheapest version is nearly $80,000.

The president visited a General Motors factory to promote electric vehicles and celebrate the passage of his $1.2 trillion infrastructure bill that includes funding for electric vehicle charging stations.

An electric car and a plug-in hybrid car charge at a public charging station on October 12, 2019, in Berlin, Germany. Germany is hoping to encourage electric car sales as a means to bringing down CO2 emissions and combat climate change. (Photo by Sean Gallup/Getty Images)

“It’s good to be back in Detroit. And that Hummer is one hell of a vehicle,” Biden said during his remarks. “Zero to 60 in three seconds. Whoa!”

Biden praised Barra for investing in the Detroit factory, ignoring GM’s announcement in April they would invest $1 billion into their factories in Mexico to produce electric vehicles.

“Mary, you are an incredible leader. You really are,” he said.