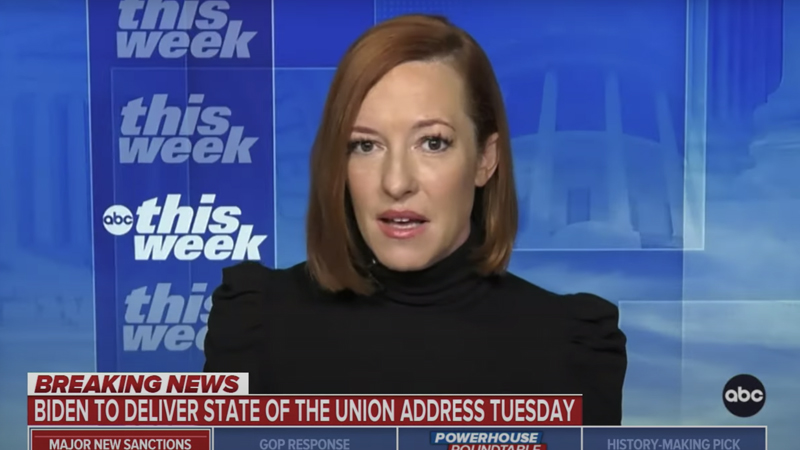 Joe Biden will apparently speak about US “optimism” during his State of the Union address despite terrible polling over his handling of a range of issues, according to White House press secretary Jen Psaki.

When confronted about Biden’s terrible poll numbers and a majority of the country who “question the president’s mental capacity”, Psaki pivoted and insisted Biden discuss his efforts to “build a global coalition” regarding the Ukraine-Russia conflict.

“I think there’s no question that in the State of the Union, the American people and anybody watching around the world will hear the president talk about the efforts he has led over the past several months to build a global coalition to fight against the autocracy and the efforts of President Putin to invade a foreign country,” Psaki said Sunday on ABC’s “This Week.”

Biden’s contrived message of “optimism” at the State of the Union will come amid skyrocketing domestic fuel prices, surging inflation, and record disapproval over his handling of the Ukraine-Russia conflict and his COVID vaccine mandates.

Quite a lot to be optimistic about!

And despite Biden’s assurances that he will do “everything in my power to limit the pain the American people are feeling at the gas pump”, Psaki undercut his message by telling host George Stephanopoulos that his administration won’t make any effort to increase oil production, but rather continue to push for the reduction in reliance on foreign oil through “green energy.”

BREAKING: Jen Psaki just said that we need to reduce our reliance on foreign oil, but doesn’t want to increase American gas and oil production pic.twitter.com/QNXx2drbMy

How exactly will that bring fuel prices down? Psaki didn’t say.

Biden’s overall approval stands at a record low of 37% and a disapproval of 55%, according to a Washington Post-ABC poll released Sunday.