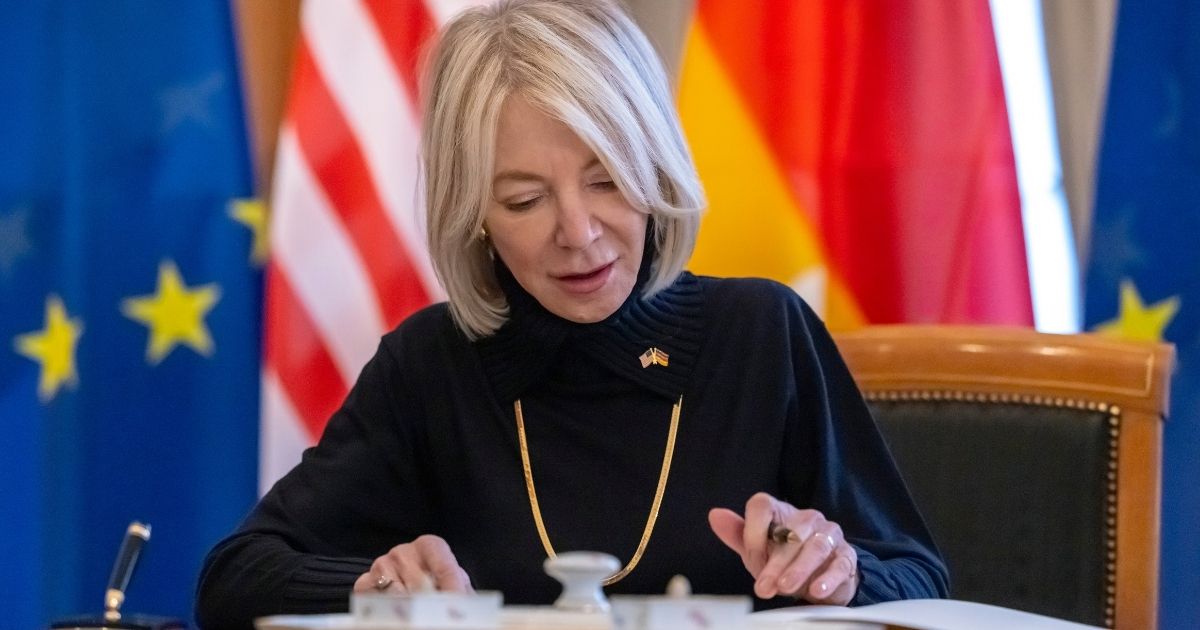 Ambassadors usually do not have to announce they are against suicide bombers.

But for one Biden nominee, it turned out to be necessary.

In 2006, Amy Gutmann was the president of the University of Pennsylvania. During a Halloween party in her home, she posed for a photo with a student who was dressed as a terrorist.

The picture resurfaced after Gutmann was approved by the Senate on Feb. 8 to be President Joe Biden’s ambassador to Germany.

This is an actual photo of Biden’s ambassador to Germany, Amy Guttmann pic.twitter.com/GX4V4KxMlR

‘Epstein’s Pimp’ Found Hanged in Jail Cell; All Public Action in Case Ends with the Death

According to a Jerusalem Post article from 2006, Gutmann only issued an apology after days of growing controversy over the costume worn by the Syrian-born engineering student.

In a statement, Gutmann said, “I abhor terrorism, suicide bombers and everything they do. My record is unabashedly clear on this point.”

Not just clear, but unabashedly clear. She must have really meant it.

Is this ambassador already embarrassing the Biden administration?

Whoever made Biden’s decision to nominate Gutmann must have been impressed by such a keen diplomatic stance.

To be fair, Gutmann, who was dressed as Glinda the Good Witch from “The Wizard of Oz,” was mingling at a busy event back when the picture was taken.

The young man’s tasteless idea of a costume was not in her control. Gutmann said the student apologized to her for the incident, once it was exposed, according to the Jerusalem Post.

While Gutmann, now 72, did nothing wrong in the moment of the snapshot, it does raise questions.

Why did it take days of criticism before she acknowledged how bad the image was?

A student knew it would be OK to show up at her house dressed as a suicide bomber. What does that say about Gutmann’s reputation and judgment?

Other serious questions came up during Gutmann’s Senate confirmation hearings.

The Hill reported that, while Gutmann was in charge Penn, Joe Biden was appointed the Benjamin Franklin Presidential Professor of Practice at the university. Biden was paid over $900,000 while he held the position.

In a letter, Republican senators questioned whether this was a quid pro quo deals that led to her ambassadorship. Biden is infamous for alleged bribery.

There were also concerns raised about Chinese donations to the school, according to The Hill. Gutmann denied any wrongdoing.

The Biden administration has become infamous for bad personnel choices as well.

In January Sam Brinton was given the weighty title of Deputy Assistant Secretary of Spent Fuel and Waste Disposition in the Office of Nuclear Energy for the Department of Energy. Brinton claimed to be the first gender-fluid person in federal leadership.

Social media revealed imagery of Brinton in a series of grotesque outfits. He was almost as flamboyant as Justin Trudeau.

It’s hard to take these grown people playing dress-up seriously. And yet, in their positions of authority, they can cause some very serious consequences.