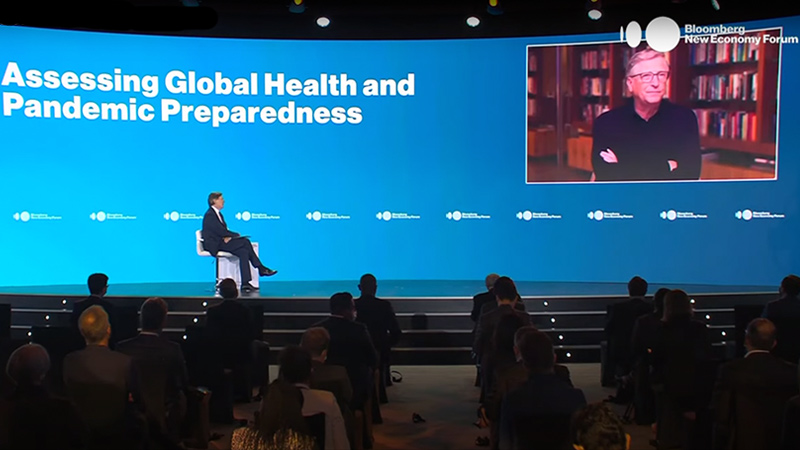 During Wednesday’s Bloomberg New Economy Forum, billionaire Bill Gates discussed how the world can get past the Covid-19 pandemic and prepare for the next hypothetical outbreak he keeps warning about.

Beginning his interview with Bloomberg’s John Micklethwait, Gates touched on the global vaccine rollout, complaining that in some “sub-Saharan African countries where the epidemic has not been as visible, demand for the vaccine is challenging to generate,” adding, “but we’ll do the best we can on that.”

Of course, the Gates Foundation head never mentioned how or why African nations with low Covid numbers would need to be vaccinated against the virus.

Regarding the next year of Covid, Gates said, “The death rate and the severe disease rates ought to be coming down dramatically, and by next summer getting to be quite a bit lower than the average seasonal flu level is assuming there’s no surprise variants, which right now is unlikely but can never be ruled out.”

Micklethwait oddly said Covid “is like the flu” during the next question, which is strange considering the grief many people received for making similar comparisons last year.

Next, Gates praised China for stopping Covid early, calling it a “huge blessing” before admitting the low amount of natural immunity in their population will force the communist nation to “drive their vaccination coverage up dramatically before they drop the wall” of strict Covid lockdowns and regulations.

Micklethwait noted many people assume China is not telling the truth about their Covid numbers, but he said that “even if they fibbed a bit, they’re still amazingly good.”

The Bloomberg editor-in-chief mentioned that Singapore, New Zealand, and Australia have good covid numbers, but are starting to “open up” unlike the Chinese who will likely be locked down for another year.

At one point during the interview, Gates complained that attendees of COP26 in Glasgow, Scotland were taking their masks off during the climate conference’s receptions.

Continuing, Micklethwait asked what the world can do to prevent another pandemic once Covid is brought down to flu-like levels.

Gates said countries need to engage in “germ games” in order to fund more Big Pharma solutions to the next epidemic.

Questioned on whether or not governments would be willing to spend the money to fund a World Health Organization surveillance body that Gates has recently been calling for, the Microsoft founder claimed the money would be “the best insurance policy that anybody ever talked about.”

This global spy-grid would be able to obtain and spread information in areas where local governments might not be interested in “trumpeting the information.”

When it comes to people handing over their personal health information and subjecting to vaccine passports, Gates admitted Covid has been “an interesting test in people’s trust in their politicians or their health system.”

“Statistically we didn’t do as well as I would have expected,” he continued. “In fact, I’m cited as some mastermind in some evil plot in many, many cases. I didn’t expect any of that. In some ways the politicization of taking vaccines and helping to protect other people, we’ve taken a step backwards.”

The unelected global health guru alleged, “A meaningful minority in most countries were led down a path of believing that not only were there rare side effects, but the vaccine was not properly tested was part of some evil conspiracy.”

When Micklethwait asked Gates if vaccine hesitancy could be a global problem going forward, Bill referred to “rumors” about the Polio vaccine that have made it difficult to disperse.

While Bill dismisses scientific data proving more polio cases are currently caused by the Gates-sponsored vaccines than by wild virus, even mainstream media has been forced to admit this fact.

Near the end of the conversation, Micklethwait requested that Gates outline the largest societal change to come out of Covid other than healthcare issues.

Returning to his tech roots, Gates explained that people realizing they don’t have “to go on lots of trips” or “to go into the office every day” thanks to software like Zoom or Facebook’s impending Metaverse.

Basically, locking people in their homes is rapidly speeding up the rate at which people are accepting virtual reality and other potentially dystopian technology.

Every time Bill Gates makes a public appearance, the world gains more insight into the globalist agenda… all we have to do is pay atttention.

The medical/scientific technocracy is here! Alex Jones breaks down this takeover in the following show segment: