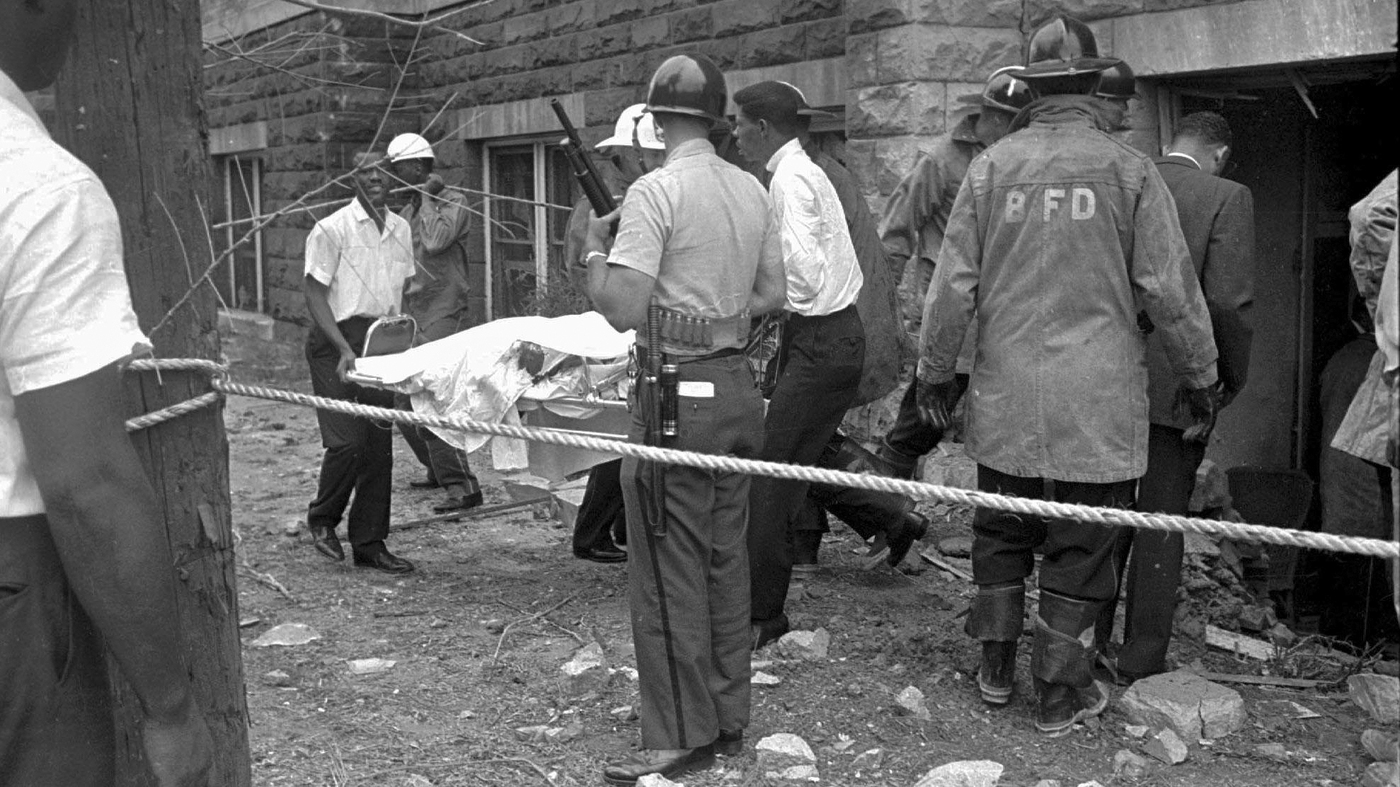 Firefighters and ambulance attendants remove a covered body from the 16th Street Baptist Church in Birmingham, Ala., after a deadly explosion detonated by members of the Ku Klux Klan during services in 1963. Leaders say the history of violence against people of color should be passed on to new generations so the lessons of the past can be applied.

Firefighters and ambulance attendants remove a covered body from the 16th Street Baptist Church in Birmingham, Ala., after a deadly explosion detonated by members of the Ku Klux Klan during services in 1963. Leaders say the history of violence against people of color should be passed on to new generations so the lessons of the past can be applied.

From her office in Birmingham, Ala., DeJuana Thompson looks across the street and sees a daily reminder of terror. Her window overlooks the 16th Street Baptist Church, where a bomb in 1963 killed four young Black girls.

“Living in the era of bomb threats is not new to people of color,” said Thompson, president and CEO of the Birmingham Civil Rights Institute.

Nearly six decades after that bombing by the Ku Klux Klan, the FBI is now investigating last week’s bomb threats against at least 17 historically Black colleges and universities across the U.S. Thompson said the threats underscore the need to teach new generations the history of violence targeting people of color so the lessons of the past can be applied to the present.

The FBI said the hate crimes probe involves more than 20 field offices and “is of the highest priority.” Investigators have identified at least five “persons of interest,” a law enforcement official told The Associated Press. The official could not discuss details of the investigation publicly and spoke to the AP on condition of anonymity.

In one of the cases, a caller claiming to be affiliated with the neo-Nazi group Atomwaffen Division described a plot at Bethune-Cookman University in Florida involving seven bombs hidden in bags, Daytona Beach Police Chief Jakari Young said.

University campuses are considered “soft targets,” but “they’re not as soft as they used to be,” said Robert McCrie, a professor at the John Jay College of Criminal Justice in New York. Universities have traditionally been easily accessible to the public, but many hardened their security after the Sept. 11, 2001, terror attacks. Now, picture IDs are needed to enter buildings on McCrie’s campus and others, he said.

Though no devices were found at the schools threatened last week, “people of color don’t have that privilege to think it’s not real,” said Lance Wheeler, director of exhibitions at the National Center for Civil and Human Rights in Atlanta.

The bomb threats against Black institutions are deeply rooted in U.S. history. In Alabama, people used to call Birmingham “Bombingham” because of how many bombs and bomb threats occurred, Thompson said. Among the many victims: the Rev. Fred Shuttlesworth, a civil rights leader whose home was damaged on Christmas Day in 1956 by 16 sticks of dynamite placed beneath his bedroom window. When a KKK member suggested he leave town, Shuttlesworth responded that “I wasn’t saved to run,” U.S. Rep. John Conyers Jr. told the House of Representatives after Shuttlesworth died in 2011.

A man speaks with a police officer in a patrol vehicle outside the Spelman campus earlier this month after 17 historically Black colleges received bomb threats.

A man speaks with a police officer in a patrol vehicle outside the Spelman campus earlier this month after 17 historically Black colleges received bomb threats.

The Congressional Bipartisan HBCU Caucus’ statement on the latest bomb threats recalled 1969 racial segregation protests at North Carolina A&T that prompted an armed response by the National Guard and police. One student was killed, dozens injured and more than 300 people arrested as gunfire was exchanged from campus buildings. The protests followed the first sit-in at a whites-only lunch counter by four Black men, later known as the Greensboro Four.

“We know from history that in spite of external threats, HBCUs are resilient institutions that will persist through all forms of adversity,” the statement said.

Universities in Arkansas, Delaware, Florida, Georgia, Kentucky, Louisiana, Maryland, Mississippi, and other states targeted last week have resumed operations since the lockdowns. But many still worry about future threats and efforts to prosecute those responsible.

Maurice Mitchell, national director of the Working Families Party and strategist for the Movement for Black Lives, said HBCUs and independent Black institutions are targeted because they represent independence and resilience for African Americans, which is a threat to a white supremacist ideology.

The attacks are “ways to try to put fear into communities that are trying to obtain freedom,” Wheeler said.

The impact of the Black vote this last election has been felt at the ballot box, such as Georgia flipping two Senate seats for Democrats including the election of Raphael Warnock as the first Black senator to represent the state. And the Black Lives Matter movement has led a national push for protests against police violence and injustice, including murder convictions for the men who killed Ahmaud Arbery in Georgia and George Floyd in Minneapolis.

There is a “culture of fear of Black independence, of Black people building our own institutions, our own power and setting out our own direction politically, economically. There’s always efforts to suppress that, and I think that is what’s happening right now,” Mitchell said. “The best way to challenge these white supremacists and haters is by doubling down and investing in HBCUs long term and strengthening them as institutions.”

National Urban League President Marc Morial called the latest bomb threats “part of the poisonous tree of hate,” putting them in the same category as legislative proposals that would suppress the vote, the Jan. 6 insurrection at the U.S. Capitol, a spike in hate crimes and backlash against affirmative action.

“Here is what I say to these bullies, these fearmongers of our day: ‘We shall not be moved,'” he said.