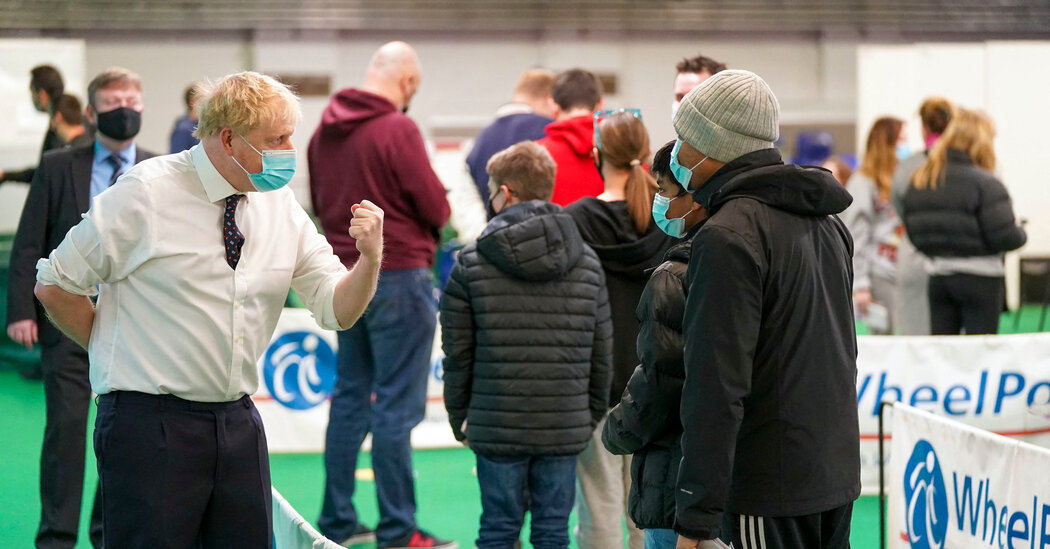 Prime Minister Boris Johnson of Britain on Tuesday said that despite the record surge in coronavirus cases, the limited restrictions currently in place in England were the right approach and would be maintained.

“We have a chance to ride out this Omicron wave without shutting down our country once again,” Mr. Johnson said at an evening news conference, adding, “We can keep our schools and businesses open, and we can find a way to live with this virus.”

The prime minister said he would urge the cabinet to carry on with the current coronavirus contingency measures, called “Plan B,” which were introduced in early December as the Omicron wave took hold. They include masking mandates, guidance to work from home and the use of vaccine passports, but they fall short of the stricter lockdown measures some opposition lawmakers and scientists had called for.

“I do think the balance of measures that we have is the right one,” Mr. Johnson said. He said he believed there was a “good chance” of getting through the wave without further restrictions.

As Mr. Johnson’s government has pushed for the Britain to remain open in recent weeks, a surge in coronavirus cases driven by the highly transmissible Omicron variant has added to the pressure to shut down. On Tuesday, some 218,000 new coronavirus cases were reported, and hospitalizations have continued to rise.

Absences at a number of hospitals across England have left a number of facilities critically short of staff, field hospitals have been set up to deal with an overflow of patients, and public transportation has been hit with shutdowns as workers called in sick.

Mr. Johnson acknowledged that the weeks ahead would be challenging. But he pointed to support being given to key industries and said he believed the staff shortages would be far less disruptive than a lockdown. He said the government has identified 100,000 critical workers who will be offered daily virus tests to help keep essential services open.

Schools in England reopened on Tuesday with new measures, including extended masking requirements and testing. Recently retired teachers were being asked to return to cover absences. And as England’s national health service moved to a “war footing,” the government was working to identify hospitals most likely to need military support.

Despite the rise in cases, there were some glimmers of good news.

England’s chief medical officer, Chris Whitty, said on Tuesday that new data showed that a booster shot gives a person around 88 percent protection against hospitalization, and that protection was likely to be even greater when it came to mortality.

The global surge. The coronavirus is spreading faster than ever at the start of 2022, but the last days of 2021 brought the encouraging news that the Omicron variant produces less severe illness than earlier waves. As such, governments are focusing more on expanding vaccination than limiting the spread.

Return to office. For many businesses, the recent surge has brought a swift reversal of return-to-office plans. In recent days, companies including Goldman Sachs and Chevron have begun to backtrack on workplace policies. Some are telling employees to stay home with just days, or even hours, to spare before their planned returns.

Earlier in the day, Neil Ferguson, an epidemiologist at Imperial College London, said that he was “cautiously optimistic” that coronavirus infection rates in London in the key 18 to 50 age group that has been driving the Omicron outbreak “may possibly have plateaued.”

Professor Ferguson told the BBC that it was too early to say whether new infections were going down, but the growth in some areas had slowed. He cautioned, however, that it could be weeks before the full impact of social mixing over Christmas was known. Holiday socializing may prove especially risky for older populations, he said.

“Hospitalizations are still generally going up across the country and we may see high levels for some weeks,” Professor Ferguson said, adding that the numbers are still far below levels seen during a peak last year.