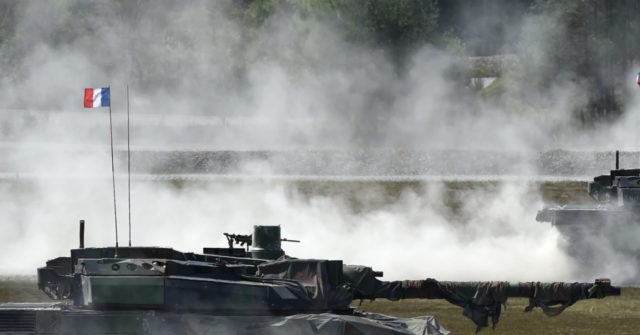 French presidential hopeful Marine Le Pen has been denounced by a former British ambassador to France for talking up a military alliance with post-Brexit Britain.

Right-wing populist Marine Le Pen’s desire for a defence alliance with post-Brexit Britain is “ignorant” and “superficial”, according to British deep stater Peter Ricketts, a former ambassador to France.

The career diplomat went on to claim that Le Pen’s France would be a “dangerous” ally for the United Kingdom, while also stoking fears about the presidential candidate’s alleged desire to boost strategic ties with Russia.

According to a report by The Guardian, Ricketts believes that Le Pen sees a Britain free from the European Union as a natural ally to her reformed version of France, with the candidate openly calling for France to leave NATO’s integrated command in favour of smaller defence agreements.

However, the former ambassador has denounced such suggestions.

“It is a recipe for disaster for France,” the publication reports Ricketts as saying, quoting the diplomat as going on to claim that Le Pen’s supposed plans are “ignorant, superficial and completely [misunderstand] the basis of France’s cooperations with all her allies”.

“There is a lingering assumption in her proposals that a Brexit Britain will be a natural ally for a nationalist Le Pen France,” Ricketts said.

“But what her proposals bring out is that France under her leadership would be a very dangerous ally for the UK with her plan of leaving the NATO military command structure, renegotiating its alliance with America, being much more nationalistic in its purchase of defence equipment and continuing a strategic partnership with Russia in all sorts of areas,” he alleged.

“It is frankly inconceivable that she would be able to drive a wedge between the U.S. and the UK,” he went on to say, as if it was an established fact that this was her goal.

“Apart from her relationship with Russia, I don’t see how any of France’s traditional alliances would survive her presidency. It would have been far better if she had been honest in her defence manifesto and replaced the Union Jack with the Russian flag, because that is the only potential ally she is likely to find,” he concluded, continuing the long tradition of establishment figures accusing anyone who challenges the globalist status quo of being a Russian stooge — whether during the Brexit campaign, the 2016 U.S. presidential race, or the recent Hungarian elections.

Marine Le Pen Calls For ‘Referendum Revolution’ To Hand Power Back To The Peoplehttps://t.co/1NQOpHU4nf

Ricketts is far from the only person who anticipates the trumpets of Armageddon sounding should Marine Le Pen be elected.

Le Pen’s only remaining opponent in the race for the Élysée Palace, incumbent president Emmanuel Macron, has been repeatedly beating the anti-Russia war drum, arguing that the populist Rassemblement National candidate has been too friendly towards Russia — even as NATO allies like Poland accuse him of the same.

However, while Macron and many others have denounced Le Pen for her perceived position towards Moscow, the French electorate does not seem to be all that concerned, with Le Pen — who has vowed to hold a referendum on immigration should she be elected — having seen considerable electoral gains since the Russian invasion of Ukraine.

Both Macron and Le Pen are now only within a few percentage points of each other in a number of polls, with the possibility of the veteran populist becoming France’s first woman president seemingly becoming less remote by the day.