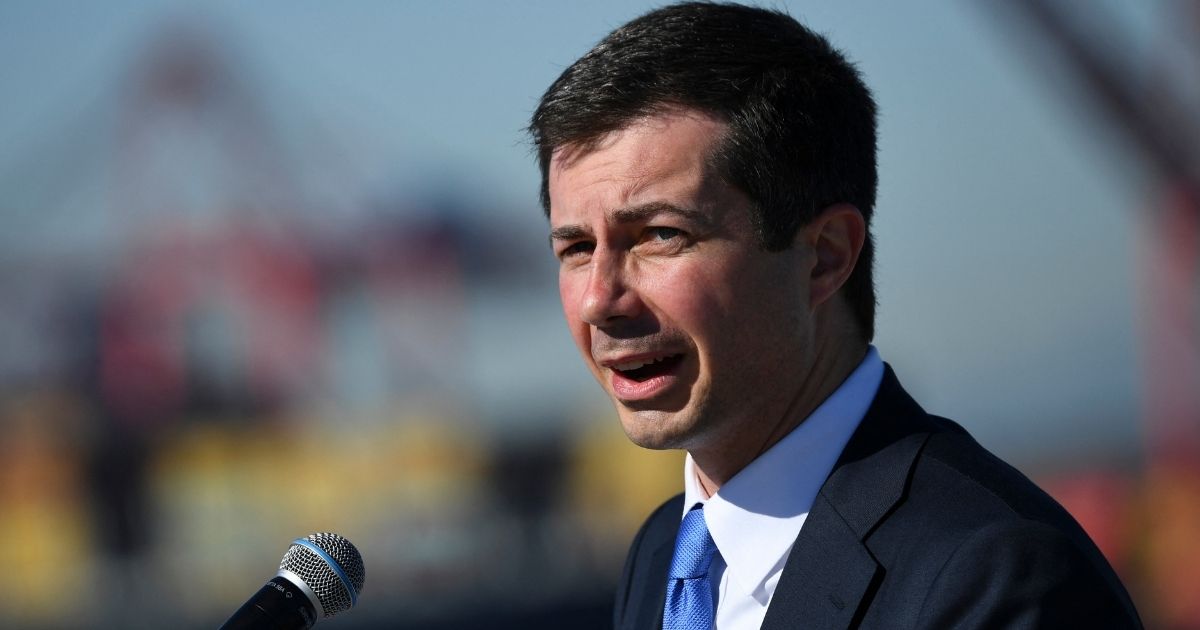 At the height of the supply chain crisis, Transportation Secretary Pete Buttigieg was on paternity leave — something he was roundly criticized for. Don’t worry, though. He got back just in time to save Christmas, according to the mayor of the city which is home to one of our biggest ports.

Never mind that Buttigieg is finally visiting the ports of Los Angeles and Long Beach, two of the biggest supply-chain bottlenecks in the United States, months into a supply-chain crisis that has limited what Americans can buy and jacked up the prices we pay for it. After all, it took Vice President Kamala Harris how long to visit the border after she was put in charge of taking care of the “root causes” of the border crisis?

Rather, let’s take a look at the fact that — as Buttigieg did a victory lap at the ports — evidence that the crisis still hadn’t been solved was lurking over his shoulder.

And yet, there are plenty in the administration and on the left who would prefer to pretend this crisis didn’t exist. When they play pretend, we here at The Western Journal hit them with the facts about our snarled supply chain in the United States — and how President Joe Biden is responsible. You can help us bring readers the truth by subscribing.

According to The Hill, Buttigieg was introduced by Los Angeles Mayor Eric Garcetti (a Democrat, as if you needed to ask) as the “man who saved Christmas” before his Tuesday speech.

It’s been a sunny and productive day here in LA, meeting with elected officials, port leaders, labor, and others invested in improving our supply chain. pic.twitter.com/9XMgtr3fXL

Buttigieg wasn’t about to disown the moniker, calling the movement of goods at the ports “an extraordinary achievement,” noting they set a record high.

“One of the reasons why Christmas was not in fact canceled is that ports like L.A. and Long Beach moved record levels [of] goods, allowing an all-time record high in terms of retail sales his holiday season,” he said.

Is the Biden administration responsible for the supply chain crisis?

“When there is an issue affecting ports here, you will feel it as far away as my Indiana hometown,” said Buttigieg, the former mayor of South Bend, Indiana.

“Not only is this about the presents under the tree, this is about essential goods like medical goods that are needed in this moment of continued public health challenge,” he added.

It’s a beautiful day here at the Ports of LA and Long Beach where workers are meeting unprecedented retail demand with help from @POTUS‘ Supply Chain Task Force. pic.twitter.com/mOW3DUqMHF

And, of course, he acknowledged challenges — which is nothing that a little (or a lot) of infrastructure spending couldn’t fix.

CNN Worries About Biden’s Age and Popularity, Drops Names of 11 Candidates to Replace Him in 2024

“As long as the pandemic persists, as long as we are making up for decades of past disinvestment, we are going to see impacts on shipping times and shipping cost,” Buttigieg said.

But overall, Buttigieg and the Biden administration had saved Christmas, right? Sure, unless you happened to look over Pete’s shoulder:

The problem hasn’t much changed, it seems. On Monday, the day before Buttigieg’s visit, National Review reported that on Friday, “there were 105 ships waiting for berths at Los Angeles and Long Beach” — the highest number ever.

On Friday, “there were 105 ships waiting for berths at Los Angeles and Long Beach. That’s the highest number ever”https://t.co/0b5fKbrqEc

The difference, according to National Review’s Dominic Pino, is that you don’t notice it quite so much anymore because of how the ports in Los Angeles and Long Beach are handling incoming ships.

“Back in November, the port authorities in southern California adopted a new queuing system for ships that allows them to wait anywhere in the world without losing their spots in line,” Pino wrote. “They did this because the exhaust from all the ships idling near the ports was harming the air quality. For a few weeks, this change made it appear as though the number of ships waiting had declined because they were no longer clogging up the harbor. But the Marine Exchange of Southern California adjusted its counting method soon after.

“Only 16 of the 105 ships waiting are within 40 miles of the ports, FreightWaves says. The other 89 are scattered all over the world, with many congregating off the Baja peninsula.”

Buttigieg “saved Christmas,” in other words, because someone hid the problem elsewhere for him. A few post-holiday grinches noticed, however:

That must be why the stores are all empty. 🤦🏻‍♂️

Oh, and they are pretty empty.

The meat section at my local store. pic.twitter.com/SUURfDAXeV

However, to shamelessly tout your accomplishments, there have to be accomplishments. A desultory look over Pete’s shoulder — and a more comprehensive look at the ships idling off the coast because they can’t dock in Los Angeles or Long Beach — showed there are none.