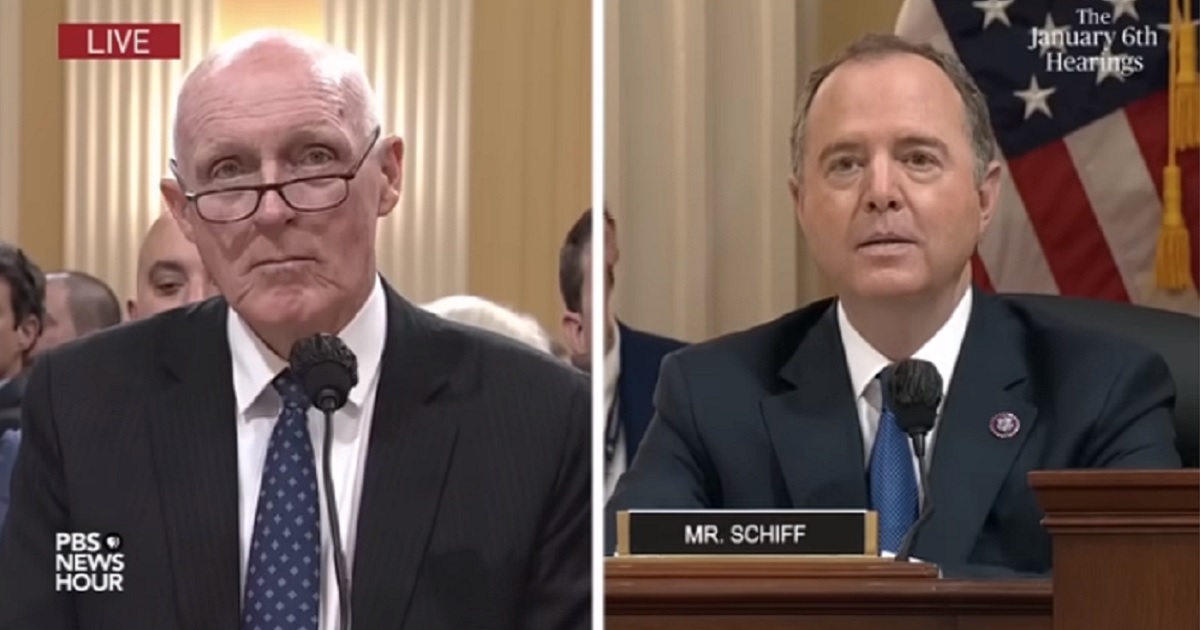 People seated immediately behind Arizona House Speaker Russell Bowers struggled to stay awake as he testified before the Jan. 6 committee on Tuesday.

Three men could be seen with heavy eyes as Bowers, a Republican, recounted phone conservations he had in December 2020 with former New York City Mayor Rudy Giuliani and then-President Donald Trump about holding a hearing at the Arizona Capitol to review allegations of voter fraud related in the last presidential election.

Rep. Jim Jordan of Ohio, whom House Speaker Nancy Pelosi would not allow on the Jan. 6 committee, is the GOP ranking member on Judiciary Committee.

Hillary Clinton Finally Throws in the Towel Against Trump

In the video, Bowers discusses his opposition to holding a hearing, given Giuliani’s hoped-for end game would be to replace Biden’s electors with Trump ones, if fraud could be shown to the satisfaction of a majority of state legislators.

Bowers told the Jan. 6 committee he flat out refused the request, though suggested he would be open to a hearing if “qualified attorneys” told him it was legally acceptable.

“That’s totally new to me. I’ve never heard of any such thing,” the speaker said he explained to Giuliani.

Do you think the Jan. 6 committee hearing is too one-sided?

Bowers then argued it would be contrary to his oath to the U.S. and state constitutions.

“This is totally foreign as an idea or theory to me, and I would never do anything of such magnitude without deep consultation with qualified attorneys,” he recalled saying.

Maybe it was foreign to him, but remember the Democratic push for “faithless electors” in 2016, based on the false narrative that Russia had compromised the election or perhaps even Trump himself was some sort of Manchurian candidate?

The hope was to deny Trump the 270 electors needed to secure the presidency. House Speaker Nancy Pelosi’s daughter, Christine, helped spearhead the effort.

Celebrities like Martin Sheen, Debra Messing and James Cromwell pleaded with the electors via video to make the stand for “democracy” or whatever, and ultimately seven electors did.

For Bowers, it’s unclear how simply holding a hearing to review allegations of election fraud would run contrary to his oath of office.

The U.S. Constitution recognizes the state legislatures’ authority over how electors are chosen. Article II, Section 1, clause 2 provides, “Each State shall appoint, in such Manner as the Legislature thereof may direct, a Number of Electors, equal to the whole Number of Senators and Representatives to which the State may be entitled in the Congress.”

More of the Bowers-Schiff exchange is below:

The state legislature also has authority over how the elections are conducted, according to Article I, Section 4, Clause 1.

In December 2020, when this call took place, a lot of people had questions here in Maricopa County in the Phoenix metropolitan area, where I live and voted in the last presidential election.

Arizona was one of five states to flip from Trump to Democrat Joe Biden in 2020 and did so with the narrowest margin among them: .03 percent or 10,457 votes.

Maricopa County was the only county to flip in the Grand Canyon State from red to blue from 2016, when Trump carried it over Democrat Hillary Clinton, to 2020, when Biden took it against Trump.

What was strange at the time and still strange now is that Republicans won every county-wide office, save sheriff, which went to the Democratic incumbent.

By December 2020, when the Bowers call took place, a legal fight was brewing between GOP members of the Arizona Senate and the Maricopa County board of supervisors, who refused to comply with requests for data to audit the election results.

The legal wrangling continued into the spring of 2021 until a judge ordered the board of supervisors to turn over the ballots and other information needed.

A hand recount of the ballots started in April 2021 determined in September 2021 that Biden had, in fact, won the county, though questions remain if all the ballots were legally cast.

On Tuesday, Trump put out a statement prior to Bowers’ testimony before the Jan. 6 committee saying, “Arizona speaker of the House Rusty Bowers is the latest RINO to play along with the Unselect Committee.”

“In November 2020, Bowers thanked me for getting him elected. He said he would have lost, and in fact expected to lose, if I hadn’t come along. During the conversation, he told me that the election was rigged and that I won Arizona,” Trump added.

Bowers represents District 25, which is in Maricopa County in the city of Mesa.

“He said he got more votes than I did which could never have happened,” Trump recalled. Trump said Bowers acknowledged that he would not have been re-elected without the 45th president’s rallies.

Trump concluded, “Bowers should hope there’s not a tape of the conversation.”

Jan. 6 committee member Democratic Rep. Adam Schiff of California asked Bowers to respond to Trump’s statement. (The question comes at about the 1-minute mark in the video above.).

Bowers conceded that they two did speak and parts of what Trump said are true.

However, he said, “Anywhere, anyone, any time someone has said that I said the election was ‘rigged,’ that would not be true.”

Well, Trump’s statement at least added some spice to an otherwise boring hearing.

Most Americans have tuned out the Jan. 6 committee hearings, which have been a ratings flop.

It turns out viewers just aren’t that interested in what amounts to highly scripted infomercial for the Democratic Party.

All it has primarily done is rehash what was already addressed in the second Trump impeachment — the one that ended after he was out of office.

It’s no wonder the audience might be falling asleep.