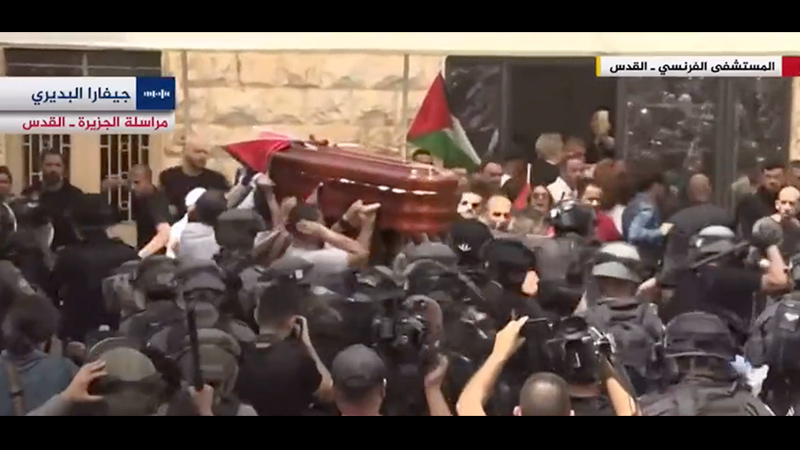 Jerusalem’s old city erupted in chaos and violence on Friday as thousands of Palestinians descended on the Christian quarter to pay their final respects to slain Al Jazeera journalist Shireen Abu Akleh.

“Israeli police on Friday moved in on a crowd of mourners at the funeral of Al Jazeera journalist Shireen Abu Akleh, beating demonstrators with batons and causing pallbearers to briefly drop the casket,” The Associated Press describes.

The Qatar-based network has accused Israeli forces of shooting her in the face when two days ago she was covering a West Bank raid, and had a press flak jacket and helmet on. An Al Jazeera statement alleged that it was an intentional “assassination”.

Mourners of the 51-year-old Palestinian-American Christian had draped her casket in a Palestinian flag, and that’s reportedly what triggered the beefed up Israeli security presence from allowing her funeral procession to pass.

“The funeral procession began at the hospital in east Jerusalem, with last respects then to be paid at a church in the Old City before her body was laid to rest alongside her parents in a nearby cemetery,” CBS News reports. “But the violence began as soon as Abu Akleh’s casket was carried out of the hospital gates, where Israeli security forces had gathered.”

The report continues, “Video showed them surging toward the funeral procession before grabbing and roughing up some of the mourners, including those carrying the coffin.” Indeed the footage shows a brutal attack with batons and kicking, which even targets the pallbearers…

The Israeli police claimed in a statement they were “forced to act” after rocks were thrown, as the procession began leaving the hospital.

“This is awful to watch. I’m traveling in Connecticut today but I have my team working to get answers about what happened here,” Democratic Sen. Chris Murphy said in a tweet.

Al Jazeera, which has been devoting round-the-clock coverage to Abu Akleh’s killing, given she was their longtime star reporter in the region, cited an eyewitness who claimed Israeli security blocked the funeral in order to ensure only Christians were in attendance.

“The Israeli army is asking people if they are Christian or Muslim. If you’re Muslim you weren’t allowed in,” the source stated. Other reports said the Israelis wanted to clamp down on any Palestinian symbols and flags.

Below: initial memorial prayers by local church leaders on Wednesday after her death, prior to the burial on Friday.

CBS noted that “At one point her casket appeared to nearly topple to the ground amid the melee. Projectiles could be seen flying through the air as Palestinians chanted anti-Israeli slogans.”