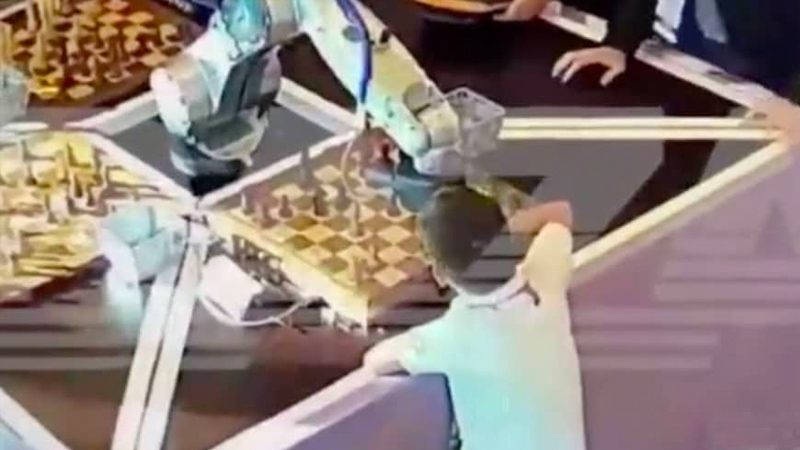 A chess-playing robot broke the finger of a seven-year-old boy during a match in Moscow earlier this month.

The incident happened July 19 during the Moscow Open tournament as the boy apparently interrupted the robot’s move.

There is no violence in chess, they said.

Video of the incident shows the robot make a move, then the boy make a quick movement on the board, which appeared to startle the robot prompting it to grab his finger and break it – supposedly mistaking it for a chess piece.

A crowd of people then rush to the boy’s aid.

According to Sergey Lazarev, president of the Moscow Chess Federation, the boy interrupted the robot’s turn. It had just taken a piece when the boy then rushed to move again before the robot had finished. Once nearby adults realized what was happening, they intervened to try and free the kid.

“There are certain safety rules and the child, apparently, violated them. When he made his move, he did not realize he first had to wait,” Chess Federation vice president Sergey Smagin told the Baza Telegram channel. “This is of course bad,” Lazarev said.

The officials say the robot completed previous matches that day, as well as at previous exhibitions, without incident. In addition, based on the video footage, it does look like the child tried to move pieces while the robot arm was still in motion. At the same time, chess prodigy or no, what else would you expect from a seven-year-old?

The boy returned to play the next day wearing a cast.

Despite the accident, the vice-president of the Russian Chess Federation, Sergey Smagin, claimed the incident was a “coincidence” and stated the robot was “absolutely safe.”

The boy’s parents, however, have “contacted the public prosecutor’s office,” according to the Guardian.