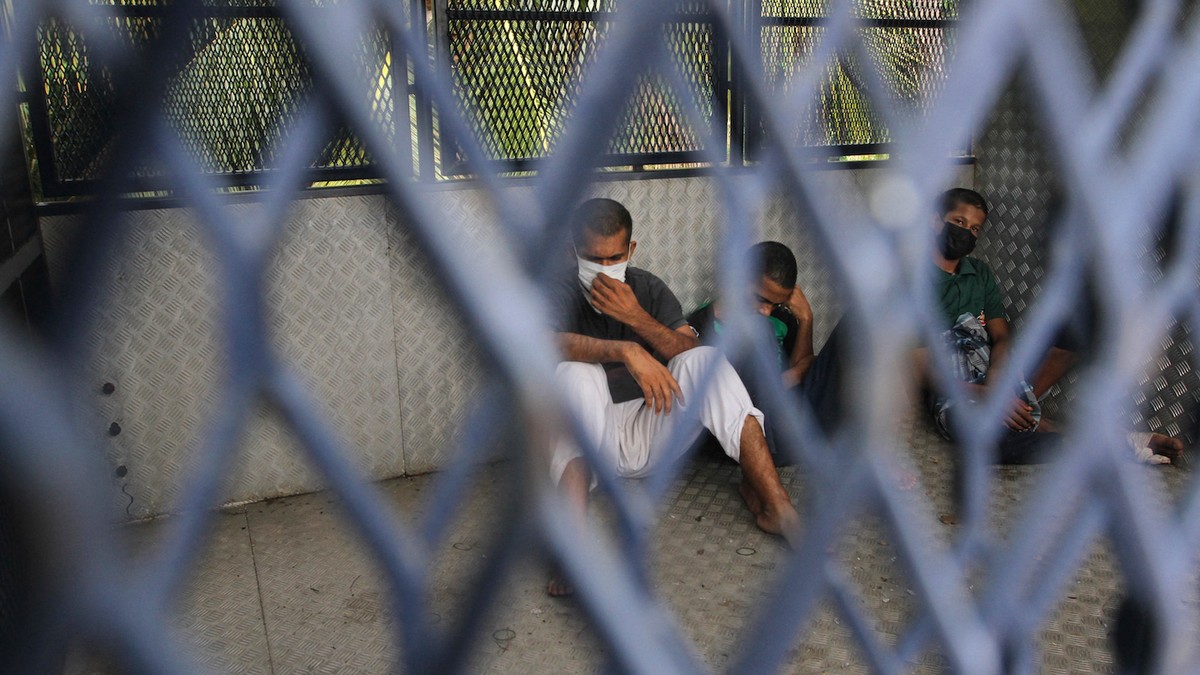 Rohingya migrants who escaped from a detention centre sit in a Malaysian Immigration truck after being recaptured on April 20, 2022. Hundreds broke out of the compound after a riot erupted. Photo by STR / AFP

In the early hours of Wednesday morning, in the midst of a pre-dawn riot, hundreds of Rohingya refugees broke out of an immigration detention centre in Malaysia’s north.

Police and volunteer security services were deployed to capture 528 refugees who fled the compound in Bandar Baharu, Kedah at about 4:30AM. By 10AM, 362 people had been rearrested—88 of them after being apprehended by nearby villagers. Six, including two women and two children, were struck and killed by fast-moving vehicles as they tried to cross a nearby highway.

“The bodies were thrown all over the highway,” Atan, a local resident who saw the accident while driving his children to school, told the New Straits Times. “It was a sad scene. Innocent lives were lost just like that.”

The cause of the riot and break-out is under investigation, and more than 100 people have not been located. Multiple agencies from two states are searching for them, according to the state police chief, Wan Hassan Wan Ahmad.

“All 528 detainees who escaped were ethnic Rohingya refugees transferred from a camp in Langkawi after being arrested for trespassing in Malaysian waters and violating the Immigration Act in 2020,” he said, claiming that detainees smashed a door and fence at the detention centre and that the 23 security personnel on duty were unable to stop them.

“Because there were so many of detainees in a cramped space, things got out of control and the detainees took the opportunity to break out.”

Ahmad warned villagers in the area surrounding the immigration detention centre to not help refugees who have fled, noting that such an act would constitute a legally punishable offence.

Malaysia is not party to the 1951 Refugee Convention, and therefore does not recognise refugee status. Unless given special dispensation by government officials, those who come to the country without the proper materials are classified as illegal immigrants.

Nonetheless, according to the UN, about 181,000 people designated by UNHCR as refugees and asylum-seekers are currently living in Malaysia. Some 103,000 of them are Rohingya, a heavily persecuted Muslim minority group from Myanmar. An ongoing trial at the International Court of Justice in the Hague is currently determining whether the Myanmar military committed acts of genocide against the group.

In light of Wednesday’s events, Human rights groups are demanding to know how many secretive detention centres—where people are held indefinitely and incommunicado—are operating across Malaysia.

“Conditions at these immigration detention centres should be documented, given past incidences of human rights violations in immigration depots in Malaysia,” Katrina Jorene Maliamauv, executive director of Amnesty International Malaysia, said in a statement, according to BenarNews. “The government… needs to answer not only on the deaths of the six individuals but also why so many refugees, including children, are being detained.”

Once a relatively welcoming destination for Rohingya refugees, public sentiment in Malaysia has soured during the COVID-19 pandemic, as viral outbreaks and related government restrictions prompted many citizens to turn against migrant communities.

A Reuters report, published in May 2020, found that Rohingya were being fired from their jobs and threatened with legal action, while hate speech and online attacks had surged. Since then, thousands of refugees have been rounded up by Malaysian authorities and thrown into crowded detention centres like the one in Kedah.

“Malaysia is unlawfully treating as criminals people who fled atrocities in Myanmar,” Phil Robertson, deputy Asia director of Human Rights Watch, said in July 2020. “Rohingya arriving by boat should be considered as refugees who have a right to protection under international law.”