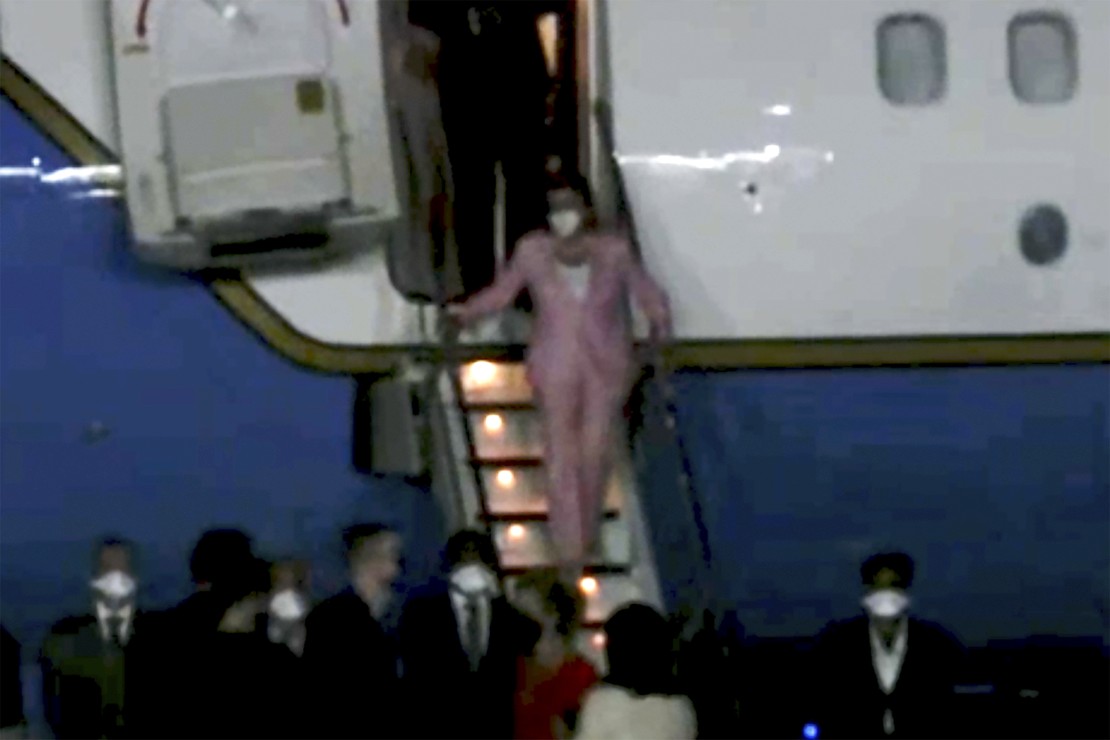 Nancy Pelosi held a joint press conference with Taiwanese President Tsai Ing-wen during her brief visit to Taiwan. During the press conference, Pelosi accused Chinese officials of sexism over their criticism of her visit. Does she have a point?

Pelosi claims that when six male senators visited Taiwan in April, the Chinese officials “didn’t say anything.” That isn’t exactly true, though. At the time, the April visit by the all-male delegation was described as “condescending” and “irresponsible”. It’s a far cry from the criticism lodged at Pelosi.

‘They made a big fuss because I’m the Speaker, I guess. I don’t know if that was a reason or an excuse,’ she said during a news conference with the Taiwanese president. ‘Because they didn’t say anything when the men came.’

Senators Lindsey Graham (R, SC) and Bob Menendez (D, NJ), Chairman of the Foreign Relations Committee, led a six-member group of US senators on the trip. They traveled on a US Air Force jet, meaning the Biden administration had sanctioned the trip.

Chinese Foreign Ministry spokesman Zhao Lijian called the April visit ‘condescending’ and ‘irresponsible’ at the time – a far cry from the rage and fury and live-fire military exercises that Pelosi’s visit has drawn.

Pelosi stumbled upon the truth as she complained of alleged sexism. The ramped up criticism she received is because of her position in the U.S. government. Her appearance ranks higher than that of a delegation of senators. In the presidential line of succession, Pelosi is second, with Kamala being first in line. The Chinese know that. She isn’t just a regular lawmaker coming to show support to Taiwan – who has a female president, by the way. Chinese officials have been concerned about a visit from Pelosi for months. Chinese foreign minister Wang Yi called Pelosi’s plans for a trip to Taiwan “a red line for U.S.- China relations.”

Tsai Ing-wen is Taiwan’s first female president. Pelosi said her meeting with Tsai was a moment to take ‘pride in women’s leadership.’ She went on to say that both she and President Tsai Ing-wen had “smashed the glass ceilings in their respective governments.” That’s an American expression. It is a reminder, too, that Pelosi’s trip was all about her legacy as the first female Speaker of the House.

Let’s be honest. Pelosi went to Taiwan to make headlines and to be hailed as an American lawmaker who stood up to the Communist Chinese. Essentially, she created the firestorm when her office – or the White House – leaked her plans to go to Taiwan. It didn’t have to happen that way and since it did, my conclusion is that she did it on purpose for the publicity. Pelosi is an 82 year old women, the most powerful woman in Washington, D.C. and she is on her way out. During her first term as speaker, the House swung back to Republican control, in the Obama days, and now it is happening again in the Biden term. This time around, there is no reason for her to stick around and wait for a Democrat comeback. She’s already in the stage of her career where she had to promise progressives she would not serve more than two terms if she was reelected speaker in 2018. Well, it’s four years later and you can bet that there are plenty of Democrats waiting in the wings to remind her of her pledge, if by some miracle the control of the House doesn’t flip in November.

Pelosi’s legacy will be as the first female speaker, that’s a given. But, she is also a legendary fundraiser for Democrats and she is a strict taskmaster who demands Democrats fall in line with whatever agenda she is pushing. Trust me, I am not singing her praises, just giving an honest assessment of her time in party leadership. She also has some history with pushing back against Chinese brutality and speaking up for human rights.

Does Pelosi have it right about alleged sexism exhibited by Chinese leadership?

But how threatened does the Chinese Communist Party feel by female empowerment?

‘The Communist Party aggressively perpetuates traditional gender norms and reduces women to their roles as reproductive tools for the state, dutiful wives, mothers and baby breeders in the home,’ Leta Hong Fincher, a Hong Kong-American writer, wrote in the Washington Post.

‘The party also is carrying out an unprecedented crackdown on feminist activists because China’s all-male rulers seem to think that China’s entire security state would collapse were it not for the subjugation of women.’

Since 2015, women’s rights in China have been rolled back under Xi Jinping, starting with the arrest of five female activists for ‘picking quarrels and provoking trouble’ after planning a multi-city protest aimed at bringing an end to sexual harassment on public transport.

While feminism is occasionally viewed as a controversial ideology in Western society, it is little-remarked how comprehensively the central tenets have been integrated into the thinking of the average person in comparison to cultures and societies in Asia.

All forms of activism are viewed as a form of civil disobedience that the CCP cannot afford to tolerate, meaning that progressive ideas such as gender equality are viewed as potentially destabilizing.

I think that Pelosi’s visit created extra strong posturing from Chinese officials – and a threat issued to Biden by President Xi (playing with fire) – was more about her position in government, not so much about being a woman. Other American women lawmakers have traveled to Taiwan without extra rhetoric put upon their visits. Her first mistake was broadcasting that she was going in advance. That gave the Chinese plenty of time to start saber-rattling. She wanted the publicity and it was selfish (and dangerous) on her part to expose herself and other Americans to possible retaliation. Her time left in the House is limited. She’s on her way out and that is good news for Republicans.