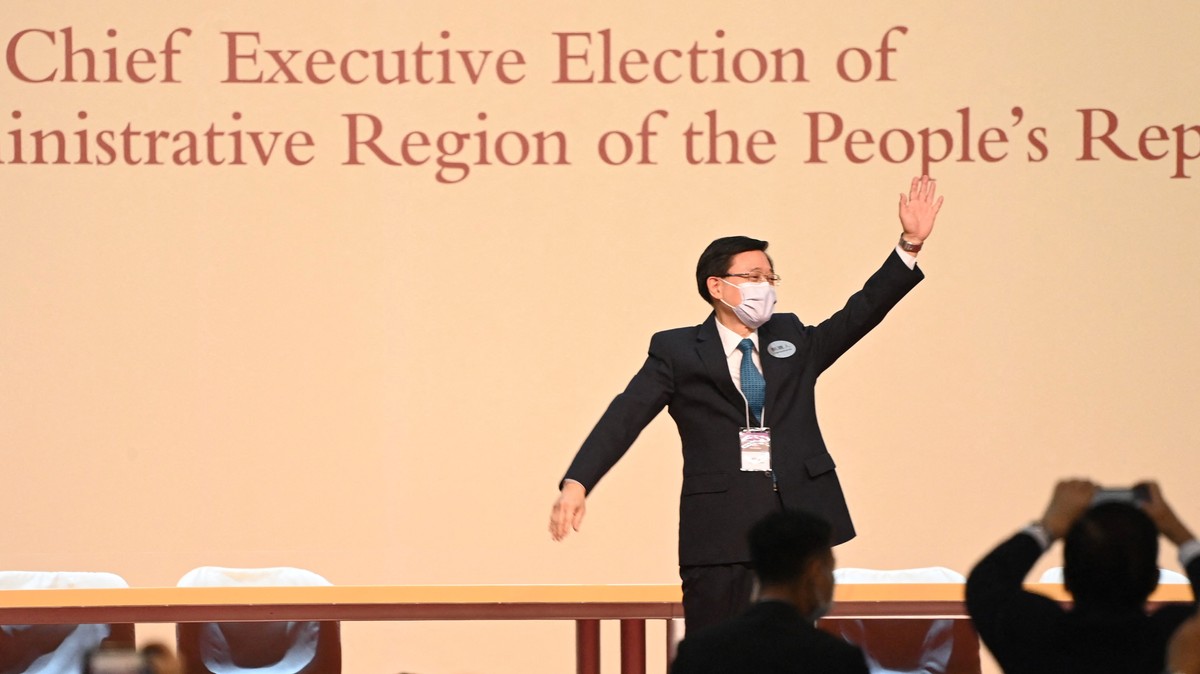 John Lee celebrates his election as Hong Kong’s new leader on May 8, 2022 in a rubber-stamp vote by a committee of Beijing loyalists. Photo: Peter PARKS / AFP

With about 1,500 voters and just one approved candidate out of 7.5 million residents, the process that put a pro-Beijing former cop at the helm of the Hong Kong government stretched the definition of election.

John Lee, the 64-year-old former security chief who led a crackdown on the city’s pro-democracy movement, was anointed the city’s new leader on Sunday. His victory surprised no one—he was the only candidate approved by Beijing, which has suppressed a democratic opposition in semiautonomous Hong Kong following a series of popular unrest and dictated that only those it deems to be patriots could run for public office.

“Beijing clearly does not bother to pretend that this is an election in any sense of the word,” Steve Tsang, director of SOAS University of London’s China Institute, told VICE World News.

Best known for his hard line on dissent, Lee was sanctioned by Washington in 2020 for his role in crushing pro-democracy protests in 2019. In the following years, armed with the draconian national security law imposed by Beijing, he led the security apparatus that arrested activists, union leaders, journalists, and most of the city’s opposition politicians, effectively dismantling the city’s once-vibrant civil society.

But the same track record that landed him on the U.S. blacklist earned him Beijing’s trust. Despite his lack of experience in fields outside of security, Beijing last year appointed Lee as the city’s second-most senior official, paving the way for his candidacy.

“Lee has no experience in all the most important policy areas, such as economy, finance and foreign trade, or fields such as social welfare, housing, education, healthcare and labour. He has only been a cop,” said Chung Kim-wah, the former deputy head of the Hong Kong Public Opinion Research Institute. “My fear is that under his rule, things will go wrong in every aspect of Hong Kong.”

“Choosing Lee as chief executive shows Beijing doesn’t mind picking a completely incapable person to do nothing but carry out its will,” Chung said.

Lee will in July replace Carrie Lam as Hong Kong’s top official, inheriting an Asian financial hub with a reputation battered by its security crackdown and harsh pandemic measures. Lam’s 5-year tenure was marred by large-scale anti-government protests that sank her approval rating to a historical record. Lee is expected to broadly carry on Lam’s policy, including further integrating the city’s economy with that of mainland China.

Seizing on what it saw as growing challenges to its rule in the former British colony, Beijing overhauled its electoral system last year to ensure only “patriots” could hold public offices. The sweeping changes put an end to any formal opposition in the city’s legislature and local councils, where popularly elected pro-democracy representatives once traded barbs with their pro-Beijing counterparts.

In the 25 years since Hong Kong returned to Chinese rule, democracy campaigners have wanted the city’s leader to be popularly and directly elected. What happened on Sunday could not be further from their ideals.

As with the previous elections, only a tiny committee stacked with pro-Beijing figures and political elites had the right to vote for the city’s leader. But under new rules imposed by the Chinese leadership last year, members of the committee were also vetted by a panel of top Hong Kong officials—chaired by Lee himself.

Unsurprisingly, nearly 97 percent of this group of 1,461 voters backed Lee and just 8 electors voted against him, according to election authorities. When asked about the lack of mandate after the polls concluded, Lee said that the election was conducted in accordance with the laws and “in a transparent and fair manner.”

While Lee’s victory was secured even before Sunday’s vote, he tried to keep up the veneer of a competitive election. He claimed to seek public support for his manifesto, including holding a campaign rally on Friday (that took place behind closed doors). In his platform, Lee vowed to bring unity and boost the city’s economy after it took a hit from months of strict pandemic controls.

But Lee simply went through the motions to put up a facade of legitimacy, observers say.

“Lee is not stupid and knows that he would have no credibility at all locally if he does not pretend to run for office, hence the charade,” said Tsang, of the SOAS China Institute.

Chris Fraser, the former chair of the philosophy department at the University of Hong Kong, said the election was “merely an elaborate public confirmation ceremony for a preordained appointee.”

“To the millions who marched in the streets in 2019, the whole charade is little more than another waste of taxpayer money on a pointless ceremony demonstrating that the Hong Kong government will never be accountable to its own citizens,” said Fraser, who is now a scholar at the University of Toronto.

Though most Hong Kong citizens did not have a say in the election, some have voted with their feet. Lee’s rise to the top accelerated an exodus of local residents triggered by the city’s authoritarian shift. Hong Kong saw a net outflow of nearly 68,000 residents in the last two months alone, compared to nearly 90,000 in all of 2020, according to government data.

Among them was Chung, the senior pollster, who packed his bag and left for the UK in April, fearing the same fate that befell dozens of pro-democracy activists and lawmakers.

“I refused to be governed by fear, but I am also worried I’ll wake up at six one morning to find national security police knocking on my door.”