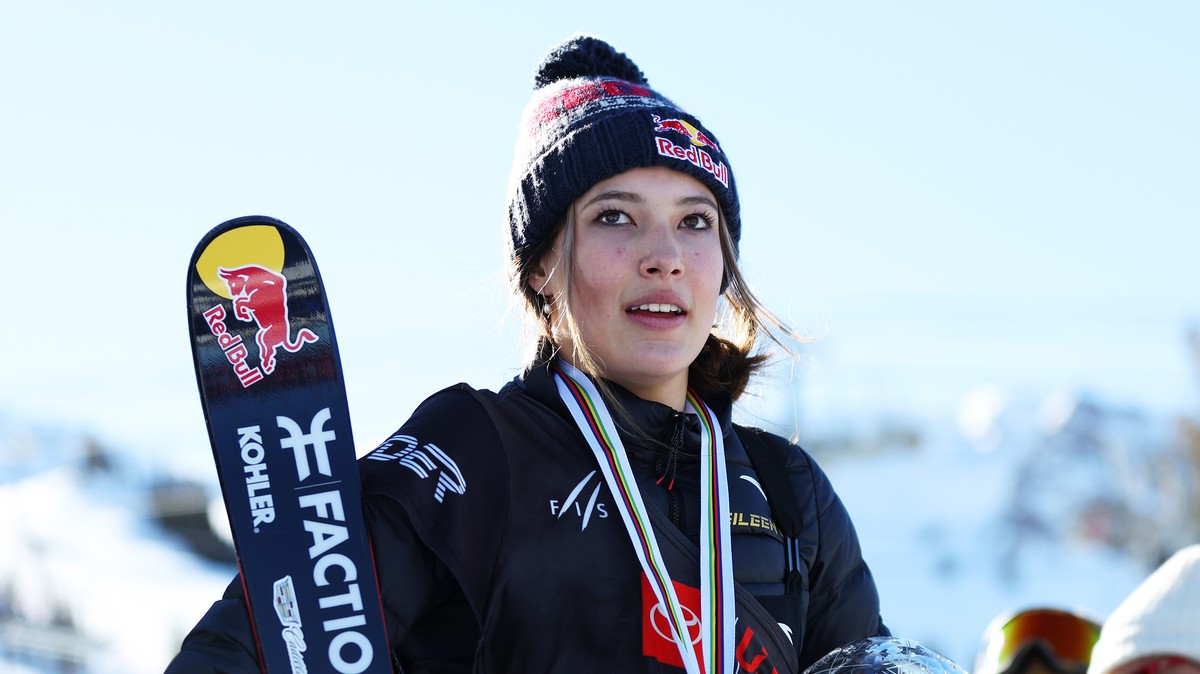 Eileen Gu, who was born and raised in the U.S., has become one of the most beloved Chinese athletes. Photo: Maddie Meyer/Getty Images

If you’re in China now, you would think 18-year-old Eileen Gu is the only one competing in the Beijing Winter Olympics.

The U.S.-born skier’s cardboard cutouts greet customers at Luckin, the most popular coffee chain in the country. Posters of Gu wearing a traditional Chinese qipao adorn elevators in apartment buildings. Inside Beijing’s subway cars, photos of the athlete, having changed back into her skiing suit, invite commuters to buy protein supplements. If you log on to Weibo, China’s Twitter, you would meet the skier again, in a full-screen ad for a dairy company, her fists held up as if preparing to fight.

Before she switched her allegiance from Team USA to compete for China in 2019, Gu was virtually unknown in the country of 1.4 billion people. But at the Winter Olympics, she is a Chinese skiing star, expected to pick up potentially as many as three medals for China and inspire more young Chinese to take up winter sports.

Thanks to her popularity in China, she has become one of the country’s highest-earning athletes, representing more than two dozen brands that span beverage, cosmetics, kitchenware, and luxury labels like Victoria’s Secret, Cadillac, and Tiffany & Co.

“She must really love China,” said Yee Xu, a fan of Gu who is also managing her Weibo fan forum, with 83,000 members. Xu proudly said Gu’s favorite color is red—the color of China. “She became a Chinese citizen probably because she wanted to bring glory to the nation.”

Gu is among the growing ranks of foreign-born-and-raised athletes China has recruited to boost its performance at the Winter Olympics. Olympic golds are seen as a key indicator of national strength in China, but the country has long failed to deliver at winter sports the same dazzling successes it has at Summer Olympics.

Winter sports such as skiing and snowboarding started gaining modest traction among the public only in recent years, and the country lagged behind in building advanced training systems to cultivate future Olympians. At the 2018 Pyeongchang Winter Olympics, China only got one gold medal, in men’s 500m short-track speed skating, ranking behind 15 other countries.

In 2015, when Beijing won the bid for the 2022 Olympics, the Chinese leadership vowed to raise the country’s winter sports profile. It set a goal to have 300 million people, or more than one-fifth of the population, engaged in winter sports. And a key to improving its medal chances was to bring foreign coaches and athletes into Team China.

China’s figure skating team, for example, launched an international program in 2018 to recruit foreign athletes and send domestic skaters to train in the U.S. One of its participants, 19-year-old California-born Beverly Zhu, is representing China in women’s singles at the Beijing Olympics.

China’s ice hockey teams are able to compete this year only because of the qualification spot specially reserved for the host nation. Among the 48 players in men’s and women’s teams, 28 are foreign-born and six have no Chinese heritage at all. The naturalized Chinese citizens include Jake Chelios, son of NHL legend Chris Chelios, Russian native Denis Osipov, and Anna Segedi, who was adopted by a Michigan family at the age of one.

The Olympic Committee requires athletes to be nationals of the countries they represent, but it’s unclear how many of the foreign-born athletes have actually acquired Chinese citizenship. Jeremy Smith, an American-born player in China’s men’s hockey team, told the Associated Press he was never asked to renounce his U.S. citizenship.

It’s not uncommon for countries to recruit foreign-born athletes to help compete against their home countries. Some athletes have also chosen to switch citizenship to a country where they could more easily qualify for the Olympics.

But for China, a country with one of the most restrictive immigration policies in the world, the Beijing Winter Olympics shows it has no problem embracing outsiders when it’s convenient to do so.

Team China in 2022 features more foreign recruits than it did in any previous Olympics. While these athletes are expected to improve China’s performance, they have also been caught in controversies at a time of growing tensions between China and their home countries.

Outside of China, they would face questions of representing a country despite concerns over its human rights abuses. The U.S. government has staged a diplomatic boycott of the games, citing the ill treatment of Muslim minorities in China’s Xinjiang region. The Chinese leadership is also under attack for censoring tennis player Peng Shuai’s sexual assault allegation against a former Communist Party leader. Many tennis stars have demanded an investigation, but most other Olympians have declined to comment.

International media’s coverage of Gu, the star skier, often focuses on her silence on such human rights issues as well as the growing geopolitical tension between her birth country and the country she now represents. She told TIME her decision to compete for China had elicited death threats. Three years after she announced her switch on Instagram, internet users are still leaving hateful comments and calling her a traitor to America under the post. “You’re an American,” a recent comment said. “You need to represent the community where you actually learned skiing.”

Inside China, the foreign-born athletes’ citizenship and political stances also regularly lead to heated debates. China does not allow dual citizenships, and most foreign-born players, including Gu, have yet to publicly address whether or not they have relinquished their original passports. Chinese internet users have questioned the special treatment they suppose these athletes were afforded.

Even overseas Chinese have faced questions regarding their political and cultural loyalty. Zhu, the Chinese American figure skater, was criticized for not being able to speak Chinese fluently. The soccer authority in 2020 pledged to educate the naturalized citizens about Chinese culture to foster their national identity.

Mark Simon, a hockey consultant who has worked in developing the sport in China, said the Chinese authorities would prefer all-ethnic-Chinese teams, but following years of failed attempts to train and recruit qualified players, they have likely included the white athletes as a last resort to avoid embarrassment.

“I hate it. I I don’t think the team should participate in the event,” Simon said. “I don’t want kids or families to think, well, if you can’t do it, just throw the white guys on the team and then, they’ll make your team OK.”

Tobias Ross, a researcher with the University of Nottingham who studies China’s soccer development, said the inclusion of foreign-born players took place when sports authorities were under great pressure to improve the country’s performance at major events, such as the Olympics or the World Cup.

“It’s not so easy to be naturalized in China. So this is very political,” Ross said. The government in 2021 recorded 17,000 “foreign” naturalized citizens among 1.4 billion people in the country, although foreign-origin ethnic Chinese immigrants might have been excluded from the figure.

He added that the government would likely only allow naturalization in sports that China desperately needs to get better at. “It’s not like China is opening its borders for lots of athletes. This is very hand-picked.”

But athletes like Gu have indeed inspired young Chinese to participate in winter sports. Among all the naturalized Chinese athletes, Gu became the most popular because of her charisma, sporting talent, and also her embrace of the Chinese language and culture. She speaks fluent Mandarin with a northern accent, shows off her dumpling-wrapping skill on camera, and has shared her make-up routine on popular Chinese social app Xiaohongshu.

Compared with other Chinese athletes trained in a rigid state-run system, Gu appears to enjoy much more freedom in participating in commercial events and getting on fashion magazine covers. She also talks less about patriotism and more about setting a role model for young people, especially the girls.

She has 252,000 followers on Instagram but 1.4 million on Weibo, where she is dubbed “the frog princess,” a nickname inspired by a green helmet she used to wear. In the weeks running up to the Olympics, the online search volume for Gu’s name exceeded that of some of the most famous people in the country such as Jack Ma, Yang Mi and Dilraba, according to data from search engine Baidu. Some internet users have complained they were getting tired of Gu’s face that was popping up everywhere.

A teenager who lives in the southern city of Guangzhou, where it rarely snows, told VICE World News that she became a fan after seeing a clip of Gu competing. On Weibo, she affectionately calls Gu her “hubby,” because the athlete is tall and brave just like how she imagines her boyfriend would be.

“I was really impressed by her fighting spirit,” the 15-year-old said. “She has a big influence on us. I really want to try skiing.”