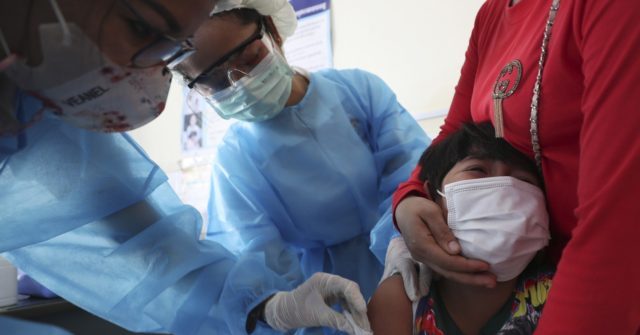 The Chinese company Sinovac Biotech issued the dubious claim on Wednesday that a third “booster” shot of its coronavirus vaccine product, “Coronavac,” would raise its efficacy against the Omicron variant of Chinese coronavirus from zero to 94 percent.

The World Health Organization (W.H.O.) announced the discovery of the Omicron variant of the Chinese coronavirus in late November after South African scientists confirmed its existence. While not having much time to study it since its discovery, scientists say the data currently suggests Omicron is highly contagious and may evade antibodies created in response to other variants of the Chinese coronavirus, particularly in vaccinated people.

A study of “Coronavac,” China’s most popular coronavirus vaccine product, conducted by the University of Hong Kong found that the product had zero-percent efficacy in generating sufficient antibodies to prevent an Omicron infection.

Sinovac told the Chinese government propaganda outlet Global Times on Wednesday that a booster shot would “more than double” its zero-percent efficacy to about 94 percent against Omicron specifically – a particularly shocking discovery given “Coronavac” was found to be only 50.38-percent effective against the original Chinese coronavirus.

Sinovac told the Global Times that it found the miraculous results in two separate recent experiments.

“The study was conducted by the company on 20 people who received two shots and another 48 who received three shots,” the outlet relayed. “Seven in the first group and 45 in the second tested positive in neutralizing antibodies against the Omicron variant, the company said in a statement to the Global Times.”

“The abovementioned study was conducted on one of the variants,” the outlet stated. “The company said it is still studying the other variant, noting that it is also conducting another study on how the Omicron can affect its vaccine efficacy at different times following vaccination.”

TOPSHOT – Medical staff members wearing protective clothing to help stop the spread of a deadly virus which began in the city, walk at the Wuhan Red Cross Hospital in Wuhan on January 25, 2020. – The Chinese army deployed medical specialists on January 25 to the epicentre of a spiralling viral outbreak that has killed 41 people and spread around the world, as millions spent their normally festive Lunar New Year holiday under lockdown. (Photo by Hector RETAMAL / AFP) (Photo by HECTOR RETAMAL/AFP via Getty Images)

The Chinese newspaper addressed the results of the Hong Kong study, emphasizing that it also found that the vaccine developed by Chinese company Fosun Pharma in conjunction with American company Pfizer also failed the study. Like Sinovac, Pfizer has enthusiastically endorsed the administration of booster shots of its vaccine product. The Pfizer vaccine product fared better than Sinovac’s, however – none of the Sinovac patients tested with sufficient antibodies to prevent an Omicron infection, while five of 25 people, or about 20 percent, did appear to have Omicron immunity.

The University of Hong Kong study was published in preview before its formal public introduction in the journal Clinical Infectious Diseases.

“Coronavac” has been approved in 40 countries or regions as of December. As of June, it was the world’s most used vaccine product against the Chinese coronavirus – potentially exposing entire continents to severe Omicron outbreaks, presuming the University of Hong Kong’s data is accurate. China actively campaigned for the W.H.O. and national health authorities to approve the product despite its poor efficacy rate.

Maria Castrejon, 71, grimaces as she is vaccinated with a second dose of the Sinovac COVID-19 vaccine at the Americas Cultural Center, in Ecatepec, Mexico, Saturday, April 3, 2021. (AP Photo/Ginnette Riquelme)

Sinovac helped by claiming, after tests showed it had 50.38 percent efficacy, that later studies found it between 80-90-percent effective against the original strain of Chinese coronavirus, without explaining where that number came from.

The Global Times promoted a “Coronavac” rival, the product developed by small Chinese pharmaceutical company CanSinoBIO, as an alternative with better success against Omicron on Tuesday.

“CanSinoBIO told the Global Times on Tuesday that after one dose … the pseudovirus neutralizing antibodies against Omicron will only have a slight decrease compared with the original strain of the coronavirus,” the Times claimed, “which means that the vaccine’s effectiveness in face of Omicron is just slightly lower than of the original type of the coronavirus.”

CanSino had recorded a 65.7-percent efficacy rating in its first tests against the original Chinese coronavirus. It did not become part of China’s global distribution campaign at the scale of Sinovac’s product in part because the company is small and could not produce as much of its product as Sinovac could and because the company was slow to publish critical Phase III trial data.

The W.H.O. has warned world leaders that Omicron is extremely contagious and may soon crowd out the currently dominant coronavirus variant, the Indian-origin “Delta.” The U.N. agency has also urged the world to disregard the claims by South African doctors actively treating patients and public health celebrities like Anthony Fauci that Omicron presents with mild symptoms, claiming, “we could be setting ourselves up for a dangerous situation.”

South African doctors first identified Omicron as a separate variant with far more mutations than previous discoveries in November. Following the warning from South Africa, several European nations admitted they had evidence that Omicron was spreading there before it reached the African continent. Despite this, many countries, including the United States, have maintained travel bans on residents of southern African countries without imposing similar measures on Europe.