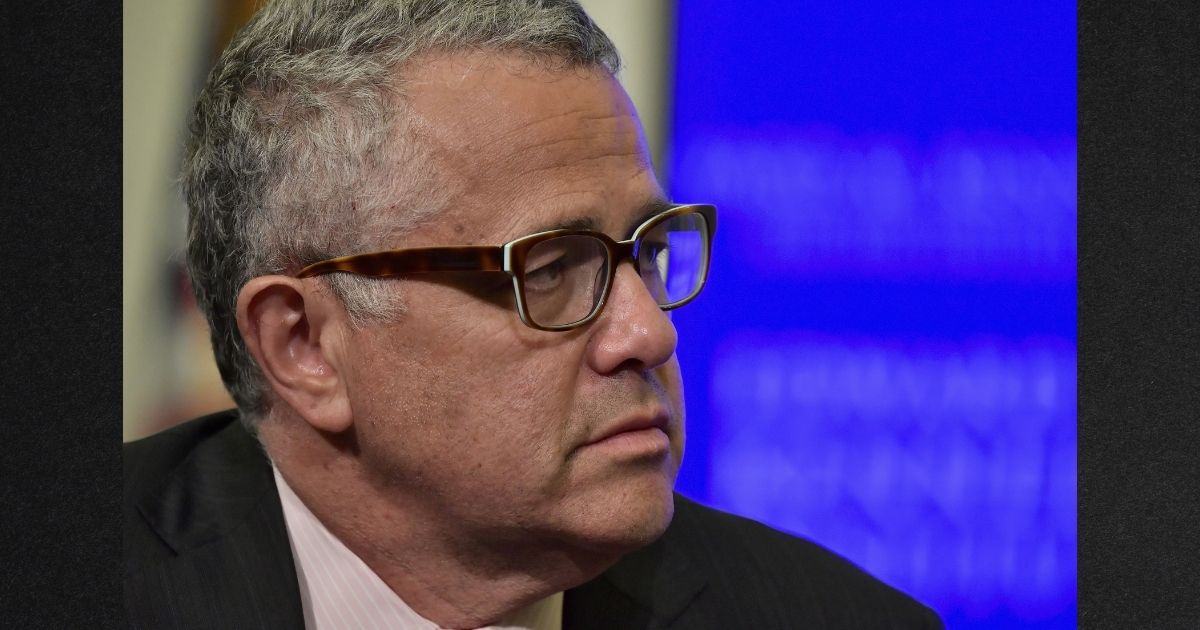 Jeffrey Toobin has a history of getting into trouble of a romantic nature with people he probably shouldn’t be so enamored with.

The most high-profile example of this phenomenon happened in 2020, when he proved on a Zoom call with colleagues that prurient infatuation needn’t involve two people. Having forgotten to turn the camera off, the legal analyst for CNN and The New Yorker had sexual relations with someone he holds in inordinately high regard — namely, himself. Toobin lost his gig with The New Yorker but, inexplicably, was allowed to continue at CNN after a decorous period had passed.

(Here at The Western Journal, we’ve chronicled CNN’s hypocrisy in allowing its on- and off-air talent to get away with problematic shenanigans — all while they cry foul about made-up scandals at conservative outlets. We’ll continue to document how, if it weren’t for double standards, the establishment media would have no standards at all. You can help us by subscribing.)

However, another part of Toobin’s sexual history resurfaced on Monday and Tuesday, when CNN had him on repeatedly to talk about the leaked Supreme Court draft opinion which would overturn Roe v. Wade and the constitutional right to abortion that it provides.

According to Fox News, CNN had Toobin on no fewer than six times between Monday night and Tuesday.

During none of these appearances, however, did he disclose that he fathered a child with his mistress — the daughter of one of his CNN colleagues — and reportedly tried to bribe the woman to have an abortion.

I guess that could explain why Toobin was offering pro-abortion hot takes like this one:

“The rate of abortion does not go down when abortion is banned…what’s different is that women die and women are horribly mutilated…” pic.twitter.com/gyKJKzQwv1

Toobin opined that in countries in Central and South America, where abortion is banned, “the rate of abortion does not go down … what’s different is that women die and women are horribly mutilated because abortion is conducted in an unsafe way.”

“What this means is that a constitutional right that women have had in this country for 50 years, pushing three generations, is gone,” he said in another clip. “It is gone overnight, and it is now up to the politicians.”

“This is a constitutional earthquake if it stands.”

Thankfully, if he gets another mistress pregnant, his home state of New York will still legally allow her to get an abortion. Not that this is what happened the last time.

As The New York Times reported in 2012, Toobin had an affair with Casey Greenfield, the 20-something daughter of Jeff Greenfield, then his colleague at CNN. Toobin was (and remains) married to a very indulgent woman named Amy McIntosh. The legal analyst, they reported, “questioned the paternity, balked at submitting to a test and vowed to take no responsibility for a baby he wasn’t sure was his.”

Spoiler alert: it was.

The Times said she had “ruled out an abortion.”

Should Jeffrey Toobin have been fired by CNN?

However, the New York Daily News reported something more disturbing: sources who said that when Greenfield got pregnant, Toobin offered her “money if she’d have an abortion.” If she would abort the baby, the source added, Toobin went as far as offering to pay for her to have a baby via sperm donor at a later date.

“When Casey wouldn’t have an abortion, Jeff told her she was going to regret it, that she shouldn’t expect any help from him,” another source told the paper.

Needless to say, Twitterers were less than amused at this, ahem, conflict of interest.

You can understand why Jeffrey Toobin is upset tonight. The possibility of men losing the right to pressure their mistresses into having abortions for money can feel like a personal attack for some people.

I always find it interesting that every time @CNN wants to discuss the importance of “Abortion rights” and Roe v Wade,they invite Jeffrey Toobin who cheated on his wife,got his mistress pregnant and demanded she have an abortion. He certainly is the abortion man😏 https://t.co/I7rDsqG3Mv

Jeffrey Toobin tried to force his mistress to have an abortion. https://t.co/mL2mImSRyW

Jeffrey Toobin is definitely an expert on abortion. https://t.co/Rzf5gCpzZn

What’s amazing is that the child paternity suit Toobin had to endure after he impregnated Greenfield — and the media circus it created — is arguably the most accountability he’s ever faced for his problematic private behavior.

Perhaps it’s just a coincidence that one of the effects of legal abortion is that it relieves men who impregnate women of the responsibilities of fatherhood. Perhaps it’s also another coincidence Jeffrey Toobin reportedly begged and bribed his mistress to let him off the hook by killing their child, then disavowed any responsibility when she wouldn’t.

It certainly doesn’t feel that way, though — and his persistent presence on CNN after the abortion draft opinion was leaked served as an ugly reminder of that.