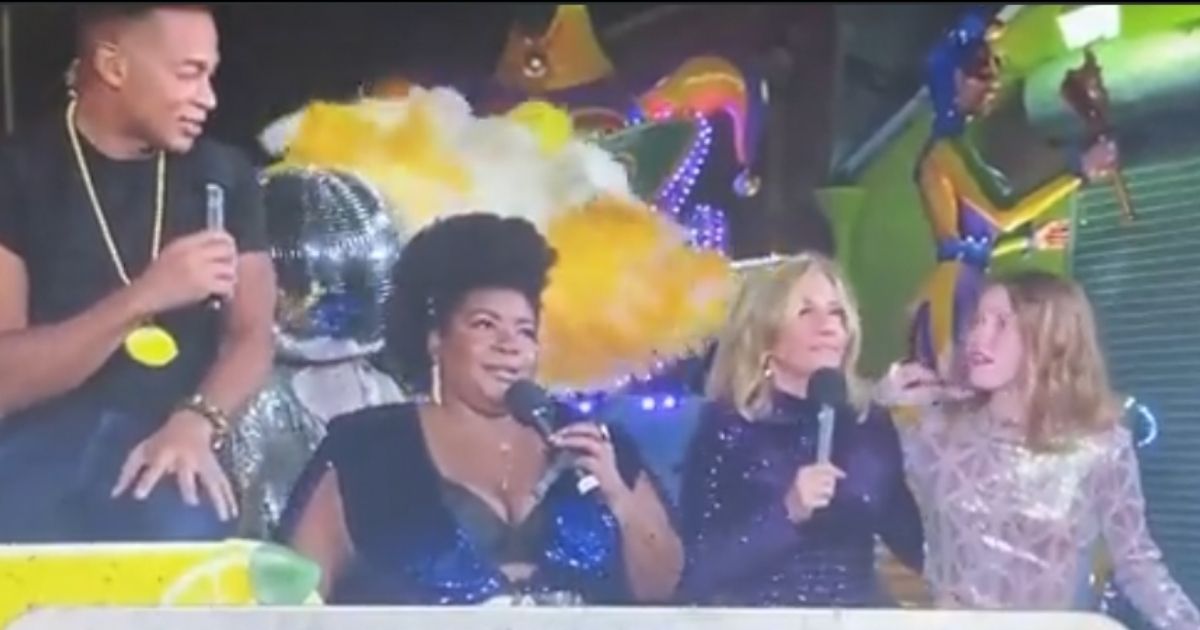 There was a point on New Year’s Eve, as I waited for my kids to give up on staying up late (we made it to about 9:15), that I thought to myself, “I wonder what Don Lemon is doing to disgrace himself for the cameras this year?”

I kid you not.

Lemon, who, I suppose, we can consider CNN’s top host now that its disgraced former star Chris Cuomo is out, has a habit of on-air tomfoolery on New Year’s Eve, which generally, as you might have imagined, appears to involve copious amounts of alcohol.

One year, for example, he caused a minor sensation after making a crude comment about comedian Kathy Griffin’s bosom. Another, he drunkenly thought a local newsgirl was his old college girlfriend. (By the way, it seems remiss not to mention at this point that Lemon is, were you not aware, openly gay.)

This year, however, his drunken on-camera idiocy — which, as my suspicions had been correct, did occur — took on a new and significantly more disgraceful air considering it came at a time when his network is embroiled in a series of scandals of the child sexual assault variety, on top of the sordid affairs he and Cuomo have both found themselves in.

In case you’ve missed it, Cuomo was ousted from the network in early December as new information was released regarding the extent to which he helped his brother, now-former New York Gov. Andrew Cuomo, respond to a sexual harassment scandal over which big brother ultimately resigned.

Cuomo reportedly tried to use his contacts in the news industry to help his brother’s team get ahead of news stories surrounding the accusations that the governor had groped and kissed several non-consenting women.

Before this new information was released, Cuomo had already been forced to apologize on air for the role he played helping his brother respond to the accusations.

Then after continuing to be allowed on air in light of text messages released by the New York attorney general’s office in November, Cuomo was fired after an accusation of sexual impropriety was raised against him by an anonymous woman represented by the attorney of one of former Gov. Cuomo’s accusers.

Is moral degradation destroying our country?

Now, that’s just Chris Cuomo, and it’s not even the end of his ties to CNN’s sex scandals.

Just a week after he was fired, a CNN producer was arrested and charged with crimes related to his alleged recruitment and sexual abuse of underage girls, whom prosecutors say he led in online “training” sessions with their mothers to teach them to be “sexually subservient” to men and that he even paid for one in-person meeting in which he assaulted a 9-year-old girl.

This producer, John Griffin, appears to have been quite chummy with Chris Cuomo when the two worked together on the program “New Day” before Cuomo got his own show in 2017.

It wasn’t long, however, before a second CNN producer was accused of soliciting sexually explicit images of a 15-year-old girl who he also allegedly fantasized about abusing in text messages obtained by guerilla journalism group Project Veritas.

This producer is now under investigation.

So after re-hiring a pervert who can’t keep it in his pants long enough to sit through a Zoom call, firing their top anchor for helping his brother to cover for a sex scandal before becoming embroiled in one himself and seeing two, count ‘em two, network producers accused of sick sex crimes involving children, you would have thought it would be a year for CNN to keep a tight leash on their hosts on New Year’s Eve, take full advantage of the broadcast delay and try to lay low and avoid any more sex scandal.

No one thought it might be a good idea to cut the cameras once a woman who was partying with Lemon started talking about her New Year’s resolution to avoid engaging in coitus with men who can’t afford to fly her to the Caribbean, and no, I’m not making this up.

No class over at CNN. Pure filth. Everything woke… pic.twitter.com/NErbCDhwSs

A woman on what appeared to be a parked parade float featuring dancing drag queens told Lemon that her New Year’s resolution was to avoid “broke d***,” a comment which took Lemon a few tries to hear, ultimately forcing him to remove his earpiece.

When she clarified her comment, he began laughing uncontrollably, as she went on to lament that “broke d***” was lamentably “so good,” which might pose an obstacle to her fulfilling her lofty resolution.

Yes, instead of more wisely signaling to his producer that they might want to cut back to Anderson Cooper (who was, to be fair, grappling with his own on-air snags), Don Lemon drunkenly and delightedly commiserated with his saucy interviewee as she explained her goals for 2022’s casual sexual encounters.

What’s more, as one Twitter user pointed out, it appeared that there might have even been a child within earshot when the host giggled over these crude remarks, as a very young woman appears to be seated next to Lemon’s co-host, Brooke Baldwin, as the two also grin and snicker over the exchange.

Is that a child on the right?

I haven’t even gotten to the full extent of CNN’s sex scandals, either.

Let’s not forget that Lemon himself stands accused of crude sexual harassment in a lawsuit set to be heard this year, after allegedly grabbing his genitals in a bar and then rubbing his hand all over a man’s face.

You’ve got to ask, is this absurdly long list of sexual impropriety and sick crimes tied to CNN a wild coincidence?

Or is this indicative of a sick company culture that tolerates perversion, perhaps even subtly celebrates it?

I have a very unsettling feeling it’s the latter. After all, we could easily argue that such a trend is the natural conclusion of the worldview that CNN not-so-subtly pushes.

Is it any wonder that society’s open affirmation and celebration of alternative sexual lifestyles and destruction of traditional sexual ethics as heavily promoted by the very left-leaning network is easily linked to on-air uncouthness, sexual impropriety and sick, perverted sexual crimes?

Traditional, biblical sexual ethics have been mocked as bigoted and repressed for decades as our culture has moved towards one that overwhelmingly rejects such “archaic” notions.

But as the #MeToo movement plainly showed us, as casual sexual encounters and alternative sexual lifestyles have become more accepted and mainstream, women are still sexually victimized in disgusting ways, as are, sickeningly, children that are preyed upon by people with sick sexual fetishes living in a world in which the lines between supposedly healthy sexual behavior and unhealthy sexual desires gets blurrier by the moment.

For this reason, we ought to earnestly pray that what is coming out about CNN, in the context of our wildly immoral sexual culture as a whole, starts waking America up to just how far we have strayed from being able to profess to be a nation in which women, children and all of God’s image-bearers are once more considered worthy of protection from the degrading effect of low sexual morals.