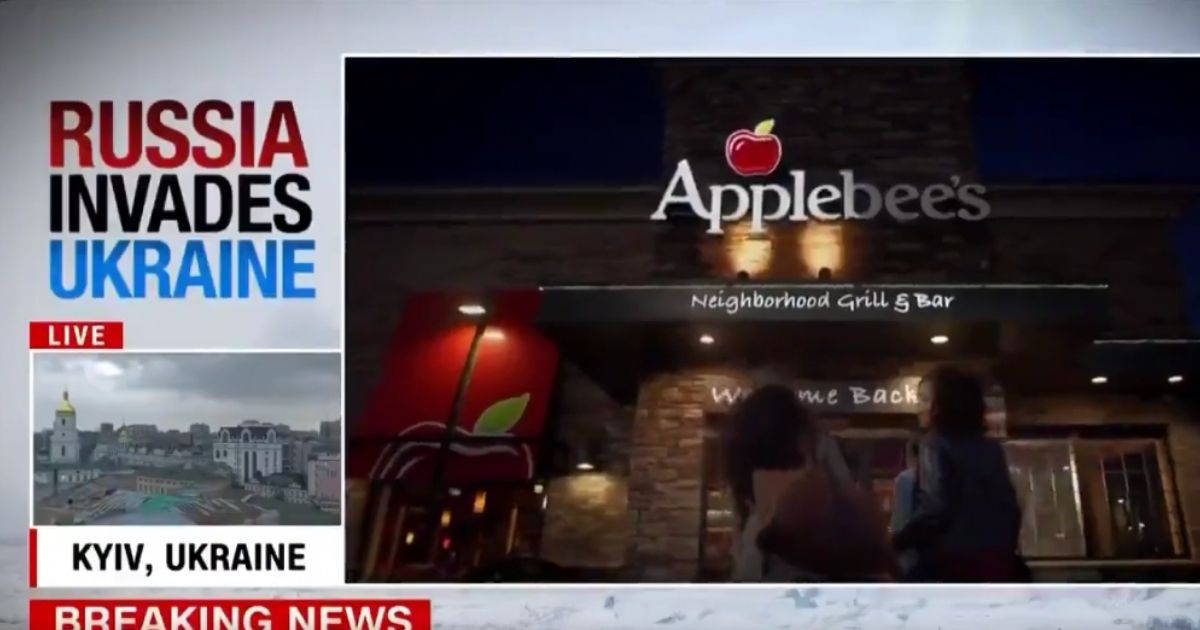 CNN is getting slammed by viewers after an awkward cut to an Applebee’s commercial painted their coverage of Russia’s Ukraine invasion in a tasteless veneer.

The poor placement of the restaurant chain’s ad was so bad, in fact, that Applebee’s says they’ve since paused their advertising campaign with CNN, according to MarketWatch.

As the network aired live coverage of air raid sirens over the Ukrainian capital of Kyiv on Thursday while panning across the city’s skyline, the upbeat commercial jutted in, offering an unsettling contrast to the pressing crisis on the ground.

To make matters worse, you could still see the city preparing for siege in a corner of the screen with the chyron “RUSSIA INVADES UKRAINE” as Applebee’s offerings of fried chicken and beer were glowingly displayed and a cowboy wiggled around to a catchy “Chicken Fried” tune.

Yeah, it was cringy:

CNN: This invasion is brought to you by Applebee’s!! pic.twitter.com/q2tBtULbdk

As you can imagine, CNN-critical Twitter exploded, causing Applebee’s to trend.

This is just brutal timing pic.twitter.com/n4MeLZZ3Xt

Really, CNN? There’s this thing called tone and tact. Look it up. Because your blending of commercials and all hell breaking out in Europe isn’t working. pic.twitter.com/yhnag26JQ5

Applebees: this is not what we meant when we agreed to aggressive guerilla marketing
CNN: 🤷‍♂️

Let’s go to Churchill’s speech, which is currently in progress…

Sorry to cut that off, but we have Cardi B in the studio! Cardi!

They say that all publicity is good publicity, but in this case, I can hardly imagine that’s how the food chain’s executives were feeling.

Intern: Sir, I’ve got some good news and some bad news.
Applebee’s CEO: Ok, let me have it.
Intern: The good news is Applebee’s is trending on Twitter.
CEO: That’s fantastic! What could possibly be the bad news about that?
Intern: Well… pic.twitter.com/fNyVWS1Mr1

A spokesperson for Applebee’s told MarketWatch they were less than thrilled about the timing of the ad.

Do you think this was a tastless move on CNN’s part?

“We are deeply concerned about the situation in Ukraine,” they said in a statement. “When we were made aware that our ad was placed in this manner, we immediately reached out to CNN to pause our advertising on their network. It never should have aired, and we are disappointed in the actions of the network.”

It’s always a bit sick to watch cable news outlets, of which CNN is king when it comes to lack of credibility and commercialized crises, jump on human suffering to boost ratings and stoke the kinds of emotions that keep viewers tuned to their channel.

We know that the folks over at CNN have constantly proven themselves to be agenda-driven, money-grubbing and tasteless. After all, in the last few months, they’ve fired top anchor Chris Cuomo for breaching journalistic integrity, ousted president Jeff Zucker for an unethical romantic affair with a fellow executive, Allison Gollust, and been criticized for letting disgraced former New York Governor Andrew Cuomo (Chris’ big brother who he ran cover for during the politician’s career-ending sex scandal) pick his own interview questions.

So it’s not exactly like CNN was in good standing with the American public when it was tasked with covering the invasion of Ukraine.

The poor, tasteless timing of this ad just compounds their utter lack of credibility.