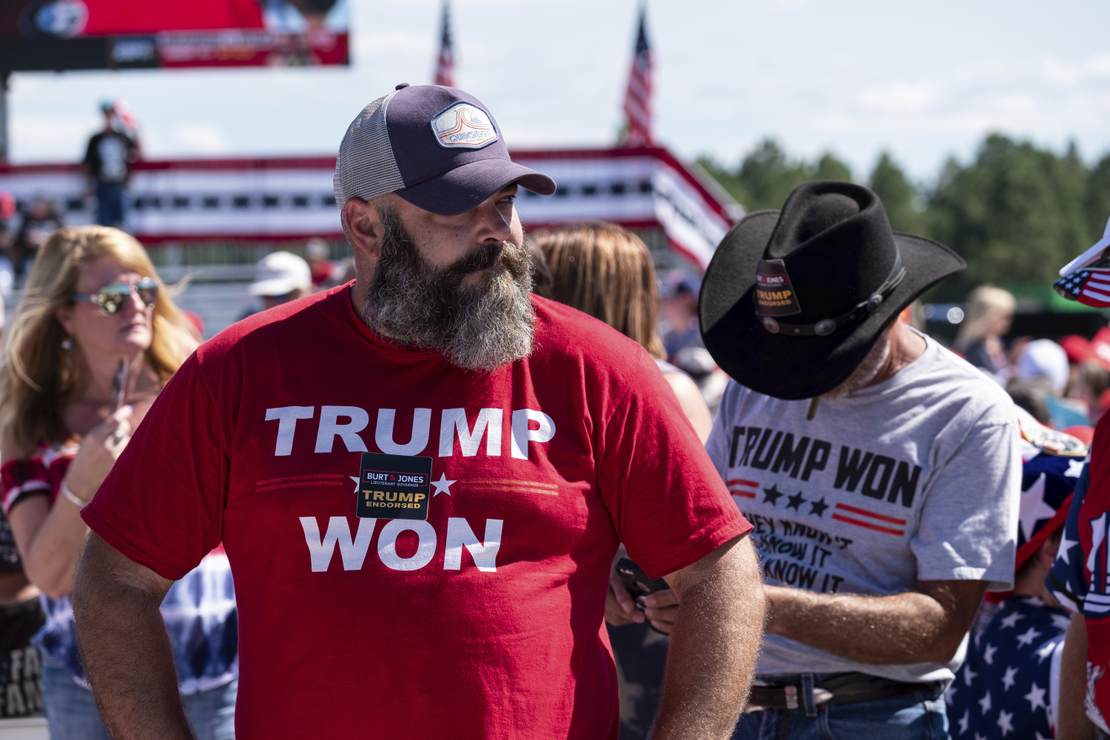 To repeat a point from a few weeks ago, there are three stages at which a presidential election might be manipulated: Vote-casting, vote-counting, and congressional certification. Trump devoted most of his attention in 2020 to the third stage, which is how we ended up with the vice president hiding in the Capitol basement to avoid being killed.

But he dabbled in meddling with the second stage too, phoning officials like Brad Raffensperger to ask about “finding” votes and leaning on state legislators in Michigan to consider sending their own slate of pro-Trump electors to the electoral college. In five swing states that he lost, his losing slate of electors actually sent signed certificates to the National Archives attesting that he was the true winner.

The bipartisan Senate group that’s meeting to reform the Electoral Count Act is chiefly focused on overhauling the congressional certification process, making clear that the vice president has no power to refuse to accept electoral votes and raising the bar for members of the House and Senate to object to the electoral votes submitted by an individual state. Currently only one member of each chamber is needed to force a floor debate on the legitimacy of a state’s votes; a revised ECA might raise it to one-third or one-half of each chamber’s members. But if Congress succeeds in tightening the certification process, that doesn’t solve the problem of 2024. Trump will simply refocus on overturning an election defeat during the second stage, when the states are busy counting their votes and certifying their results.

In fact, he’s already working on it. By replacing the Brad Raffenspergers with loyal allies who’ll do anything he tells them, Trump can ensure that his slate of electors is the one that gets to vote in the electoral college regardless of whether he got the most votes in that state’s election or not.

A few days ago WaPo highlighted this hypothetical from Yale fellow Matthew Seligman to illustrate just how prone to abuse the current ECA is.

One of two things could happen in that scenario under the law as it stands, per Seligman. If no state official tries to counter Perdue by authorizing the Democratic slate of electors as the true winners, Congress would have to defer to Perdue’s judgment. Trump wins. On the other hand, if another state official like the secretary of state does authorize a competing slate of electors, then … Trump still wins. That’s because if the two chambers of Congress deadlock on which slate of electors to recognize, the ECA gives priority to the governor.

All Trump would need to overturn a loss in a state is a compliant governor and a compliant House of Representatives, and it’s a cinch he’ll have the latter. Which means the ECA needs to be reworked — and not just to improve the congressional certification process. Congress also needs to limit the ability of a state official like Perdue to wreak havoc by authorizing his party’s slate of electors as winners irrespective of how the state’s election turned out. According to Politico, the Senate is indeed thinking about ways to do that:

The bipartisan Senate group trying to strike a deal to overhaul the Electoral Count Act is adding to its mission as it tries to ensure another Jan. 6 never happens again: a new legal process to ensure no rogue slates of electors come to D.C., according to two sources familiar with the conversations.

In addition to clarifying that the VP has no authority to ignore electoral slates, raising the bar for the number of lawmakers needed to protest slates, and protecting election workers, the group is considering a legal process that would rely on a federal judge to quickly litigate any discrepancies about who won the state.

The move comes after DONALD TRUMP tried to get GOP statehouses to send rogue slates of electors on his behalf to Congress on Jan. 6. The Senate gang wants to ensure that if that were to ever happen, the legal system could quickly dispense with the matter — rather than relying on Congress to figure out how to handle the situation.

That’s wise. Any resolution by Congress of a dispute over a state’s legitimate electors will necessarily be deemed illegitimate by huge swaths of the losing candidate’s base. The best we can do to arbitrate that dispute in an impartial way that’ll be respected by the maximum number of citizens is to send it over to the federal courts, the branch insulated from political pressures. Greg Sargent notes related reforms that are under consideration:

Here’s the conclusion that emerges: Reform must thwart corruption at both the state and congressional ends. At the state end, one emerging solution in the Senate would trigger heightened judicial review when a state government fails to follow preexisting procedures in appointing electors.

But as noted, a GOP governor could ignore this, and a GOP House could play along. So Seligman suggests a second backstop: In an ECA reform bill, Congress could explicitly direct the Supreme Court to review Congress’ count after the fact, making it less likely to decline to intervene.

Another suggestion aimed at countering the deference given to governors in the current ECA is to make “one of the valid grounds for congressional objections that the electors were appointed or voted in defiance of a court order in force at the time and which has not subsequently been withdrawn or overruled. In other words, a rogue governor acting in contempt of court would not be able to submit illicit votes and force Congress to accept them.” That would head off the “Perdue gone wild” scenario imaged by Seligman.

It’s tragic that we need to game out scenarios like that but late-stage American democracy is where it is.

The political question now for congressional Republicans is whether they’re willing to work with Democrats on ECA reform. Surprisingly, Kevin McCarthy indicated recently that he’s open to it. So did Jim Banks, who’s very much a MAGA populist. I scratched my head after Banks voiced some interest, wondering how he’d react once Trump inevitably decided to attack the senators who are huddling about the ECA. We’re about to find out:

“how come the Democrats and RINO Republicans, like Wacky Susan Collins, are desperately trying to pass legislation that will not allow the Vice President to change the results of the election?” pic.twitter.com/JA7gxK9X4G

Trump will be unhappy if his work to get allies like Jody Hice elected secretary of state in swing states like Georgia ends up going for naught because federal legislation supported by Republicans headed him off at the pass. McCarthy and Banks will end up finding something disqualifying about whichever bill comes out of the Senate, I’m sure.