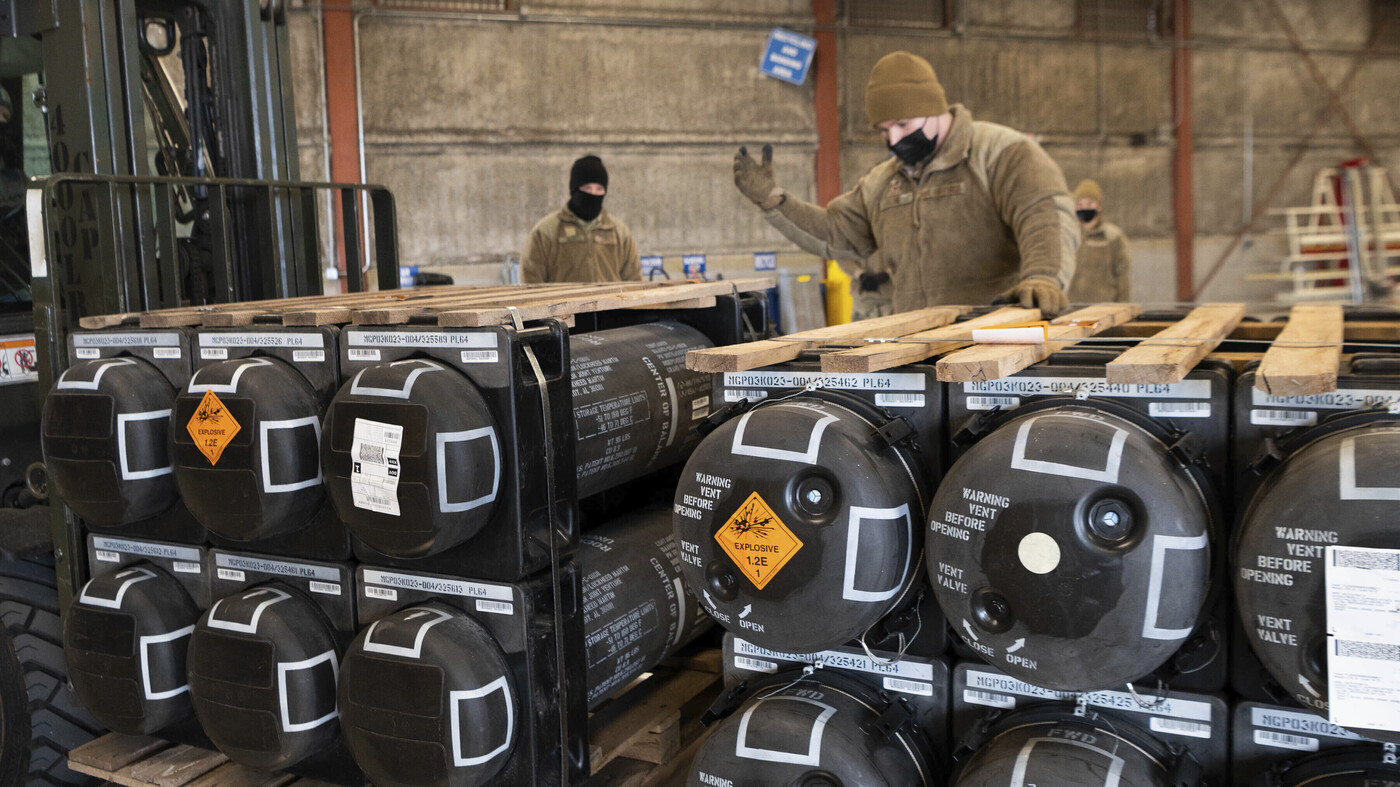 Airmen and civilians from the 436th Aerial Port Squadron place ammunition, weapons and other equipment on pallets bound for Ukraine at Dover Air Force Base in Delaware on Jan. 21, 2022.

Airmen and civilians from the 436th Aerial Port Squadron place ammunition, weapons and other equipment on pallets bound for Ukraine at Dover Air Force Base in Delaware on Jan. 21, 2022.

WASHINGTON — The longer Ukraine’s army fends off the invading Russians, the more it absorbs the advantages of Western weaponry and training — exactly the transformation President Vladimir Putin wanted to prevent by invading in the first place.

The list of arms flowing to Ukraine is long and growing longer. It includes new American battlefield aerial drones and the most modern U.S. and Canadian artillery, anti-tank weapons from Norway and others, armored vehicles and anti-ship missiles from Britain and Stinger counter-air missiles from the U.S., Denmark and other countries.

If Ukraine can hold off the Russians, its accumulating arsenal of Western weapons could have a transformative effect in a country that has, like other former Soviet republics, relied mainly on arms and equipment from the Soviet era.

But sustaining that military aid won’t be easy. It is costly and, for some supplier nations, politically risky. It also is being taken out of Western stockpiles that at some point will need to be replenished. That is why U.S. Defense Secretary Lloyd Austin convened a meeting Tuesday at Germany’s Ramstein air base to work out ways to keep it going, now and for the long run. Defense ministers and top military leaders from approximately 40 countries participated.

The West rushes to bulk up Ukraine’s arsenal

After the meeting, Austin told a news conference at Ramstein that Germany had agreed to send 50 Cheetah anti-aircraft weapons to Ukraine and that the meeting had served to unify the West’s efforts to help Ukraine “win today and build strength for tomorrow.” He said the participating nations had agreed to continue similar consultations through monthly meetings, either in person or virtually.

“We’ve got to move at the speed of war,” Austin said.

The goal, Austin said ahead of the conference, is not just to support Ukrainian defenses but to help them prevail against a larger invading force. In opening remarks to the meeting, he said Ukraine’s allies will “keep moving heaven and earth” to meet Ukraine’s near-term security requirements.

U.S. Defense Secretary Lloyd Austin attends a news conference after a meeting of the Ukraine Security Consultative Group at Ramstein Air Base in Ramstein, Germany, on Tuesday.

U.S. Defense Secretary Lloyd Austin attends a news conference after a meeting of the Ukraine Security Consultative Group at Ramstein Air Base in Ramstein, Germany, on Tuesday.

“We believe they can win if they have the right equipment, the right support,” Austin said on Monday in Poland after returning from a visit to Kyiv with Secretary of State Antony Blinken that included discussion of Ukraine’s military needs. He also said the goal is to “see Russia weakened to the degree that it can’t do the kinds of things it has done in invading Ukraine.”

Despite its early failings, the Russian military still holds some advantages that will be put to the test in the eastern Donbas region, where they are assembling more combat troops and firepower even as the U.S. and its NATO allies scramble to get artillery and other heavy weaponry to that area in time to make a difference.

With the war’s outcome in doubt after two months of fighting, the Pentagon is providing 90 of the U.S. Army’s most modern howitzers, along with 183,000 rounds of artillery — and other sophisticated weaponry that could give the Ukrainians an important edge in looming battles. The U.S. also is arranging more training for Ukrainians on key weaponry, including howitzers and at least two kinds of armed drone aircraft.

On Monday, Austin and Blinken announced $713 million in foreign military financing for Ukraine and 15 allied and partner countries in Europe; some $322 million is earmarked for Kyiv, in part to help Ukraine transition to more advanced weapons and air defense systems. The remainder will be split among NATO members and other nations that have provided Ukraine with critical military supplies since the war with Russia began, officials said.

Such financing is different from previous U.S. military assistance for Ukraine. It is not a donation of weapons and equipment from Pentagon stockpiles but rather cash that countries can use to purchase supplies that they might need.

Ukraine is looking for even more weapons systems

“It will be true to say that the United States now leads the effort in ensuring this transition of Ukraine to Western-style weapons, in arranging training for Ukrainian soldiers,” Ukrainian Foreign Minister Dmytro Kuleba said, adding, “and I only regret that it didn’t happen a month or two months ago from the very beginning of the war.”

Philip Breedlove, a retired U.S. general who led NATO in Europe from 2013 to 2016, says his shorthand summary of what Putin wants in Ukraine and elsewhere on the Russian periphery is, “Weapons out, NATO back, and no America.”

The complexities of keeping up Western military aid to Ukraine, even as its troops are fully occupied with a brutal war, are a reminder of what is at stake. Putin said before launching the invasion that Moscow could not tolerate what he saw as a Western effort to make Ukraine a de facto member of NATO. He argued that Ukraine’s interest in westernizing and in remaining outside of Russia’s orbit was due to “external forces” such as U.S. pressure.

Putin has demanded that Ukraine forswear membership in the NATO alliance, and beyond that he has insisted on turning back the clock to 1997, before NATO had begun adding former Soviet and Soviet-allied nations to its ranks.

There is little prospect of Ukraine joining NATO, but Russia’s war has in fact brought NATO closer to Ukraine. The result has been a boost to Ukraine’s prospects for mounting a successful defense, even in the eastern Donbas region where the Russians hold certain advantages and where Russian-backed separatists have been fighting since 2014.