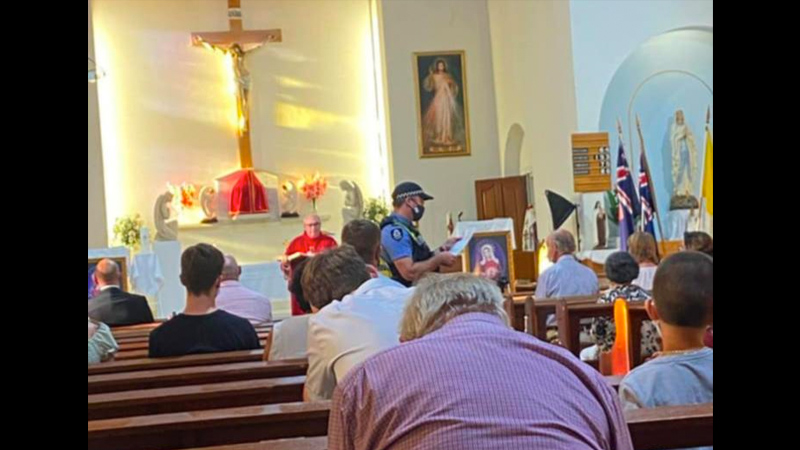 Police in Perth, Australia, stunned parishioners at a Catholic mass Thursday when they entered church to make sure people were wearing face masks.

The officers interrupted a priest’s service midway through to inspect members of the congregation at St. Bernadette’s Glendalough church after receiving a tip that several churchgoers weren’t complying with mask orders.

“Five people were found to not be wearing masks, one of which had an exemption while the four others were made to put them on,” reports 7News.com.au.

The Australian media outlet reports: “Masks are currently required to be worn at all public indoor setting across Perth and the Peel, South West, Wheatbelt and Great Southern regions.”

A photo shared on Facebook by a parishioner shows a uniformed officer wearing a mask going aisle by aisle to inspect masks and exemptions.

“A policeman allowed himself in, strutting up the aisle demanding correct mask behaviour and checking exemptions,” wrote the man that posted the photo.

“Where have we seen this behaviour before in history?”

Another parishioner told 6PR Radio, “Everyone was pretty stunned, it was confronting,” adding, “It’s troubling to see the liturgy you love stopped by police.”

Afterwards, police reported they acted on a tip from a member of the public and that they managed to force compliance within the congregation.

“Upon attendance, 5 people were spoken to by police and complied in wearing a mask,” police stated.

“One person provided proof of an exemption.”

“It is my hope that other ways can be found to deal with this delicate issue in future and my office stands ready to cooperate with the police in this matter,” Costelloe said.

“It is the formal and very public policy of the Archdiocese of Perth to do everything it can to facilitate compliance with all the government’s requirements in relation to the COVID-19 pandemic.”

“It is a matter of regret to me that the police were placed in a position which led them to take the action they did.”

Costelloe added that congregants were “left a bit shaken” by the interruption.